One of the most iconic and enduring images from this year’s Rhino Run is of Abdullah Zeinab, sitting in the desert looking utterly broken while he tries to find a tiny bolt in the sand. Without the bolt, he couldn’t ride but finding something the size of a lentil on a gravel track seemed an impossible task. We had to find out, just how did he find the mental resilience to continue searching for hours and even manage to maintain his lead to win the Rhino Run?

In my experience, wanting to quit and being overwhelmed is just a part of ultra-cycling. Understanding that took me a long time. If I was to break down my old mental process simply, it would look something like this: I would get overwhelmed and then have thoughts of quitting which would then make me more overwhelmed because I labelled that thought a ‘bad thought’ which would then send me into a pretty vicious cycle which would end up with me quitting or being extremely mentally exhausted. Even describing that makes me tired. I knew there had to be a better way.

It’s hard to describe my new mental process but I’ll do my best to share a few things that have transformed my relationship with thoughts of giving up and being overwhelmed.

It’s really a combination of theory and application. I began seeking out traditions that have been studying and training the mind for thousands of years. Naturally, I found myself immersed in Buddhist literature. I would read meditation manuals, listen to lectures, and seek out any information about how I could train my mind to serve me rather than hinder me.

It became clear to me pretty quickly that training your attention was absolutely fundamental in developing mental well-being. Knowledge of that alone was enough to transform my cycling and even better… my life.

I began to meditate for 20 minutes per day. Nothing fancy, just focusing on my breathing. I can’t really describe to you the state of my mind I was in when I began this journey but a funny Zen Koan comes to my mind.

There is a story in Zen circles about a man and a horse. The horse is galloping quickly, and it appears that the man on the horse is going somewhere important. Another man, standing alongside the road, shouts, “Where are you going?” and the first man replies, “I don’t know! Ask the horse!

I was out of control. I could hardly direct my focus for more than a couple of seconds before my mind would jump from thought to thought and before I knew it, I was off into some deep rabbit hole of my mind. It was pretty confronting to become aware of that every day. Over time, I began to improve and focusing became easier. I slowly found a spot where I was relaxed but focused at the same time. Thoughts pop up, but my focus would allow me to notice it and not get too involved. To this day I haven’t found anything more effective than this simple practice. My life improved and when I was out on the bike magic began to happen. Thoughts of quitting would rush in, and I found myself able to leave them. I might experience a pretty intense period of mental activity but if I left it, eventually it passed, and I was still riding my bike.

I would read verses online or in books and memorize them. Later, I would call them to mind out on the bike and aim to put them into practice. Here is one that continues to transform my life and cycling.

Don’t accept the pleasant or reject the awful, don’t affirm or deny, but remain vividly awake in the state of unfabricated naturalness! By remaining like this, the sign of progress is that your body, speech and mind feel free and easy, beyond pleasure and pain.

Implementing this has been and remains a daily practice for me. The bike was a great place to see its benefits instantly. This pointing-out instruction literally destroys the emotional rollercoaster that people often experience. On the bike, the sun can rise and you feel euphoric. You can then spend the next 20 minutes thinking about how great everything is. Within one second you can have the slightest bit of bum pain and then you can spend the next 20 minutes contemplating why you’re even out there. Up and down. Up and down. You get over it pretty quickly. For me, learning to not get involved with the highs allowed me to not get so involved in the lows. The result was a relaxed state of body and mind.

This is something I’m still working on and struggle with all the time. I’m sure it will be something I continue to work on throughout my whole life. It’s amazing how much time we spend training our bodies but neglect our minds which is the centre of our whole experience. In my experience gaining 10 watts on your Functional Threshold Power (FTP) doesn’t really do too much for your life. A millimetre of progress in meditation does. 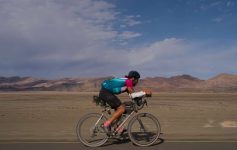 Alongside the infamous ‘missing screw’ incident at the Rhino Run, this was the first time I experienced being at the head of a race without a significant lead. Once the gap to the nearest rider is big enough, it creates an almost tailwind-like effect that gives you quite a boost in performance. In the Rhino Run, the lead was being swapped every day by me and Kevin Benkenstein. The gap I was used to never opened up. The biggest gap I had at one point was two hours, but it culminated in me having a mechanical and losing a screw the size of lentil in the desert which ended up quickly losing me that lead. Being so close to someone the whole way was definitely something I wasn’t used to. At times it was nice and at other times it wasn’t.

This was also the first time I had a media crew closely following my ride. On a deep level when you have been out there by yourself for hours on end and then you see another human being it naturally gives you a boost. Also just knowing that your loved ones are able to see you and know you’re safe can be reassuring. It can get tricky when you’re extremely stressed. Sometimes just the additional stimulus of a car or camera can make it a challenge. In my experience, it has its pros and cons.

The Rhino Run, my first experience of riding in Africa, really was like entering into another world on all levels. The sheer unknown of it all produces a large fear response and that plagued me for most of the race. I knew that there was one thing I could control and that is how fit I was and how well I handled stress.

Physically I spent months training with the help of my coach Matt De Rosches from Resilience High Performance Coaching. He created a training protocol that helped me push myself to new levels in terms of the amount of work I could handle week in, week out. A much higher work capacity meant I could handle the challenges that inevitably South Africa and Namibia would throw at me. Another thing I did was spend a lot of time the month before the race in the sauna getting my body heat acclimated which I think was an indispensable part of my performance. 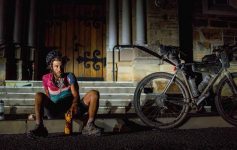 Lee Craigie and Rickie Cotter's journey - as racers, friends, and individuals, at the Tour Divide.

Kajsa Tylen; A Year in the Saddle - Part 2