Welcome to Adventure Local, a series of Apidura guides designed to help you get the most out of riding in various destinations around the world. In this edition we’re exploring Antwerp and the surrounding area of Flanders, with local resident Jeff Lockwood.

There’s a rich history of cycling in Flanders, Belgium. From its infamous one-day races to the world-class talents that hail from the region and kilometres of cycle paths, its impact can be felt everywhere, and as a result, cycling has become part of everyday life. Whether you’re out riding the hundreds of kilometres of cycle routes that criss cross the region, or inside the multitude of bike shops that inhabit every town, it can often seem like a paradise purpose-built for bikes.

“Belgium offers all manner of riding opportunities,” explains Jeff, who works for Ritchey Bikes and is a local Antwerp resident. “Since moving here nine years ago, every single ride I do includes tarmac, dirt, cobbled paths, gravel; you can find all sorts. And you can ride anywhere and everywhere in Flanders – if you’re the adventurous type, just walk outside, clip in and go.”

“Due to the prevalence of cycling in Flandrian culture, just about every town or village has a bike shop of some kind that can help out in times of need,” says Jeff. Many offer casual rentals, but opening hours can be erratic, so it may be worth considering travelling with your own bike.

If you intend on taking Jeff’s advice though, and want to ride “anywhere and everywhere”, in the city and beyond, then you are better off bringing your own bike. 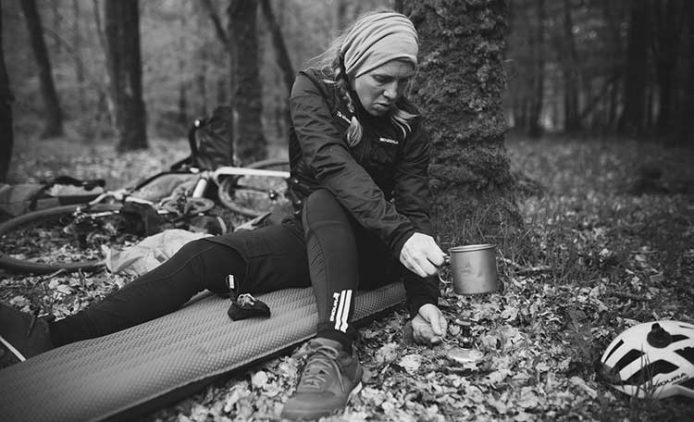 “Riding a bike is just part of the everyday culture in Belgium,” explains Jeff, “but there is definitely an emerging bikepacking subculture within that, and a growing list of organised events that cater to the bikepacking scene.”

“You can probably find an amazing bike event somewhere in Belgium pretty much every weekend of the year. Rides like Fleche-Belgie and the Duo Diagonal are rides that span the entire country, covering several hundred kilometres. Then there’s the Dirty Boar gravel ride, and I’m starting to hear talk of some overnight events on the horizon.”

On top of this, the Transcontinental Race starts in Geraardsbergen – on the cobbles of the Kapelmuur – every year. Owing to its inclusion in The Tour of Flanders (a one-day pro cycling race that starts in Antwerp, early April), the ‘Muur’ is one of many places in the region that’s steeped in cycling history, and it’s because of this fame that it has also hosted the Transcontinental for the past four editions. Try to coincide your visit with the Tour of Flanders, and you’ll get a real taste for how much this country loves cycling.

Thank you: Dank u

“You can ride anywhere and everywhere in Flanders. If you’re the adventurous type, just walk outside, clip in and go,” says Jeff. “I live in the centre of the second largest city in Belgium, which is a cycling-crazy country, so it’s a little difficult to really find anything completely new or un-travelled, but it’s not impossible. If you’re willing to take some turns off the roads and bike paths, you can find some interesting stuff.

“One of my favourite rides follows the Antitankkanal east of Antwerp, on a little gravel track. Along the path are at least a dozen small concrete bunkers that were used during the World Wars, and one massive concrete fortress that was destroyed or scuttled. They’re amazing to explore – on any kind of bike.”

If you’d rather follow a route, try Fietsnet – an online mapping tool featuring the country’s network of cycle lanes and paths. “You can plot a route of near-infinite distance and terrain using a network of signposts on roadsides around the country. Just plan it online, print out the route numbers, tape them to your top tube and start following the signs. It’s absolutely amazing – and free.”

And Jeff’s other piece of key advice? “Make sure you bring €20 with you for waffles, beer, coffee and apples on your ride.”

As you’d expect, a city so devoted to cycling is packed with places that celebrate the sport. “Antwerp has a really great bike shop called Velodome,” says Jeff. “The mechanics are great, and it’s attached to a brasserie that serves fresh De Koninck beer, which is brewed just a couple of meters away across the street. Café Mombassa in the Borgerhout area of Antwerp is another great cycling cafe that show races on a pull-down screen every week.”

Further a field, The Chainstay in Oudenaarde houses aspiring amateur and professional racers in a hostel-like facility, but also doubles as incredibly cycle-friendly lodgings for tourists. Prices include high speed internet, bike storage area with tools and bike washing facilities, plus the use of a town bike to grab those forgotten groceries from town.

“I could continue to list other cycling hotspots around the country, but that could take a while,” says Jeff. “Find a local, wherever you are, and ask them what’s close and interesting.”

Thanks to Jeff Lockwood for being the wisdom behind the wheels of Adventure Local; Antwerp. Follow Jeff’s adventures around Antwerp and beyond on Instagram.

We discover the secrets of adventure cycling in Dartmoor, with Adventure Local ride guide Alex Long.