Welcome to Adventure Local, a series of Apidura guides designed to help you get the most out of riding in various destinations around the world. In this edition we’re exploring Copenhagen, the capital of Denmark, with help from local cyclist Adrian Schmith, part of the Stenbroen Cycling Community.

Cycling culture runs deeps in the Danish capital. More than half of the city’s million residents ride a bike every day and there’s good reason why. Copenhagen is consistently ranked among the world’s top cycling cities, thanks to its designated bike lanes that criss-cross town, omnipresent rental city bikes and even traffic lights that are coordinated in favour of cyclists during rush hour. This is the town where you will see politicians commuting into work by bike, sharing the same lanes as parents on cargo bikes taking their children to nursery.

“Cycling is at the core of the Danish identity”, Adrian explains. “We’ve all grown up on a bike, ridden it to school, to work and into town. It’s no surprise that our city is designed for bikes”. But beyond Copenhagen there is much more to experience on the island of Zealand. “We might not have mountains – or even hills – but we have beautiful countryside that will make you yearn for solitude and sunrays”.

There is no shortage of options for renting a bike to explore Copenhagen. There are official ‘Bycyklen’ city bikes dotted all around town, available to hire 24/7 and with an inbuilt GPS. There are also numerous bike shops that will also rent bikes for sight-seeing around town, included Basikeli, a social enterprise which uses proceeds to repair neglected bicycles and ship them to Mozambique.

“Renting a high-end road, gravel or mountain bike is not quite so easy” says Adrian, so it may best to bring your own if possible. There are a few options, however: Copenhagen Bicycles have road bikes available and Hareskov Bicycles have an option for mountain bike rentals to explore the local forest.

This map depicts all of the places of interest mentioned in this Adventure Local guide. From finding local bike shops and cycling cafes, to navigating rides in the surrounding area, use it to unlock the city’s cycling potential.

The Airport Loop offers stunning views along the coast, but watch out for the wind! 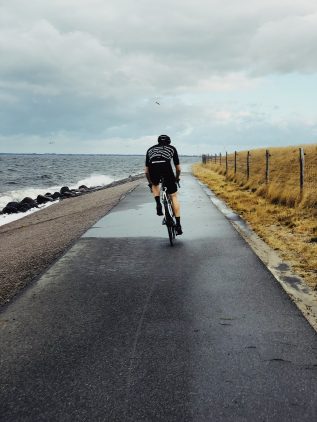 The Airport Loop offers stunning views along the coast, but watch out for the wind! 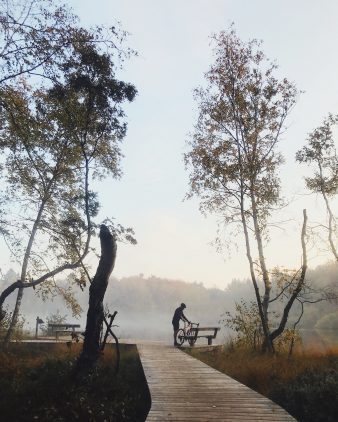 Gravel is harder to find in the immediate vicinity of Copenhagen, but when you do, you'll be presented with beautiful boardwalks alongside lakes and through forests

Gravel is harder to find in the immediate vicinity of Copenhagen, but when you do, you'll be presented with beautiful boardwalks alongside lakes and through forests

Adrian reckons the best way to explore the countryside is to join some locals. “Finding the nice roads is tough when you’re new to a city – even if you’re following a GPX file. It’s much more fun to seek the company and expertise of fellow riders.”

Fortunately, there are cycling clubs that can help out. “Ours, Stenbroen CC, can easily take you along for a spin. On Tuesdays, we do a group ride from Sankt Hans Torv. It’s 65-70 km, focusing on the social aspect of cycling and finishing with a beer at Nørrebros Bryghus. There’s also a weekly women’s only ride with the Pas Normal Studios ICC and on Thursdays there’s a speedy training session from Cranks and Coffee, finishing at the cafe with a beer or soda.”

There are also options for those interested in organised events. One of the more unique events in the calendar – Hansens Cykellob – is a 140km gravel ride organised by an ice cream company which, naturally, includes multiple breaks for frozen treats.

For longer bikepacking races, there’s the un-supported edition of the Race Around Denmark and the Round Denmark Bike Race, which covers almost 2,000km via multiple ferry crossings between islands.

On a summer’s day, there are few nicer ways to wrap up a ride than with a dip in one of the many harbour baths along Copenhagen’s waterfront. If the weather isn’t quite as nice, you could visit Rapha’s Clubhouse in the city centre, which Adrian recommends as a nice place to get a coffee. “In Vesterbro, you’ll find the little gem of the Recycles shop. Originally a workshop that transformed vintage bikes, it’s now also a road bike workshop with an expanded cosy cafe. An ideal place to spend an hour looking at bikes, drinking coffee and chatting with the staff.

For a good bike service, we would also recommend AH Cykler which is a Cervelo Certified bike shop. Outside of the city, Cranks and Coffee makes for an ideal coffee stop mid-ride. The shop has a service course, great coffee and a laid-back vibe. It’s also a nice place to shop for kit.” Finally, there’s Apidura stockist 29er Bike Shop in Charlottenlund, an essential stop for mountain bikers in the area.

There are lots of options for bikepacking micro-adventures from the capital. Unlike its Scandinavian neighbours, Denmark doesn’t have the space to allow ‘Freedom to Roam’ and wild camping, but it does have a unique network of nation-wide free shelters. Adrian suggests heading out of the city to spend the night in one of these. “We would recommend the shelters on Amager Fælled, which are really close to the city, or a little further away in Hareskoven or at Sjælsø”.

For day rides on a road bike, “go north!” says Adrian. By heading up in this direction, you’ll quickly immerse yourself in Danish countryside, via quiet roads through rolling hills. If you are short on time, consider a ride around the island of Amager, on the popular ‘Airport Loop’. “This is the number one go-to local loop. It’s a quick escape from the city and 90 per cent is on cycle lanes. The route takes you on paths that are literally on the coastline, so you can spend 15 ‘car-free’ kilometres about 2 metres from the water. The views are great, but it is always windy as you ride around the airport. Plane spotting is a bonus!” 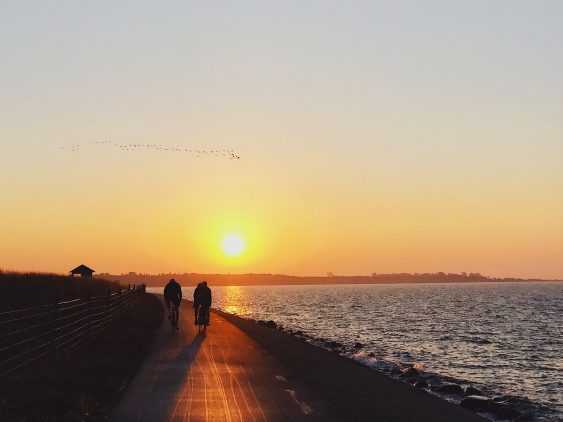 Options are more limited for those seeking off-road riding, but there is a great singletrack network in Hareskoven – just a short train ride from Copenhagen. Adrian recommends that you head north to Dyrehaven. “We’ve plotted a route called ‘Whisky Gravel’ because this area of Denmark is nicknamed the Whisky Belt, and because some of the gravel can be a tiny bit risky. This is an idyllic route that will take you past the royal hunting lodge, along lakes with boardwalks and through forest patches that resemble best the Danish countryside.”

Thanks to Adrian Schmith and Stenbroen Cycling Community for sharing their expertise on Copenhagen and its surrounding countryside. You can find them on Instagram, and be sure to check out their Adventure Collective for longer rides further afield. 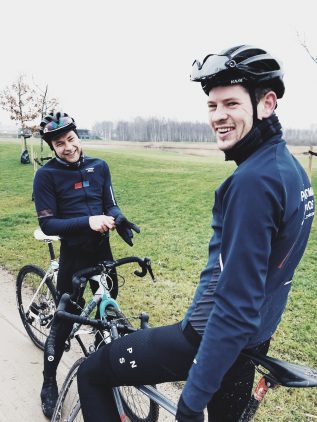 We discover the secrets of adventure cycling in Melbourne, with Adventure Local ride guide Will Hartnett.