Welcome to Adventure Local, a series of Apidura guides designed to help you get the most out of riding in various destinations around the world. In this edition we’re exploring Riyadh, the capital of Saudi Arabia, with local long-distance cyclist Omar Al Omair.

There’s a new wave of cycling enthusiasm rumbling through the Arabian Peninsula, and Riyadh – Saudi Arabia’s capital and most populous city – is right at the heart of it, with more people than ever before taking to two wheels. With endless deserts to explore and the chance of adventure around every corner, there’s much more to cycling here than the humble commute, and with a new approach to tourism policy being made by the government, it is becoming increasingly easier for foreigners to visit.

As friend of Apidura and local long-distance cyclist Omar Al Omair says: “You can ride everything from gravel roads to sandy valleys and historic backstreets. There’s enough options to provide a different adventure every day of the week.”

“There aren’t many stores offering rental services,” explains Omar, “but we have a shop or two that offer bikes for decent prices. The best shop that provides repairs as well as other services is Wheels Bike Shop, and they have a number of branches within Riyadh and the rest of Saudi Arabia.”

If you’re just passing through and simply want to get out and explore by bike, the limited options available will likely suffice. However, should you be looking to do some serious adventure riding while in and around Riyadh, we’d highly recommend travelling with your own ride.

Riding in Riyadh’s raucous centre isn’t the easiest. As Omar says, getting around the city by bike is an adventure in itself thanks to the heavy traffic and dense population. Indeed, it’s a city famous for its busy atmosphere. But get around by bike people do – and whether it’s everyday commuting or mass-participation events, the draw of the bicycle is taking hold. “Darrajati is the first and largest cycling club in Saudi Arabia, and they welcome anyone to join them and celebrate their love of cycling. They’re also generous with sharing their knowledge of the sport and local events. Every Saturday, Darrajati organises a ride that leaves from Diriyah, a historic area to the west of the city, and they welcome anyone to join.” Visit their website to find out more about ride times and meeting places.

Further evidence of the growing popularity of the bike lies in the national holiday celebrations: “The biggest and most important event for cyclists is held during the Saudi Arabian national day holiday,” says Omar. “A marching parade is assembled, including more than one thousand cyclists riding through the streets, all wearing green and chanting the national anthem.”

It wasn’t until 2013 that women were even allowed to ride their bikes in Saudi Arabia, and even now it is an activity that is harshly restricted. But women like Baraah Luhaid are doing their utmost to change that with the founding of gender-inclusive cycling communities like Spokes Hub, which Baraah set up, and Women on Wheels. “Changing core beliefs requires slow, consistent work,” Baraah told the Guardian in an interview. “It’s challenging, but someone has to start.”

Wild camping in the desert outside of Riyadh 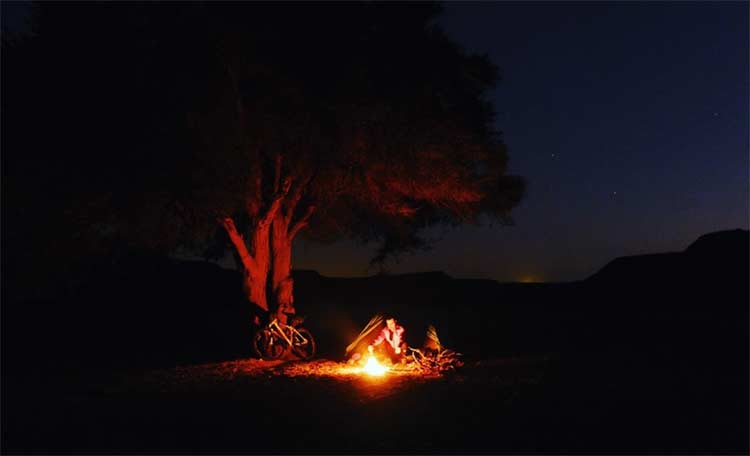 Wild camping in the desert outside of Riyadh 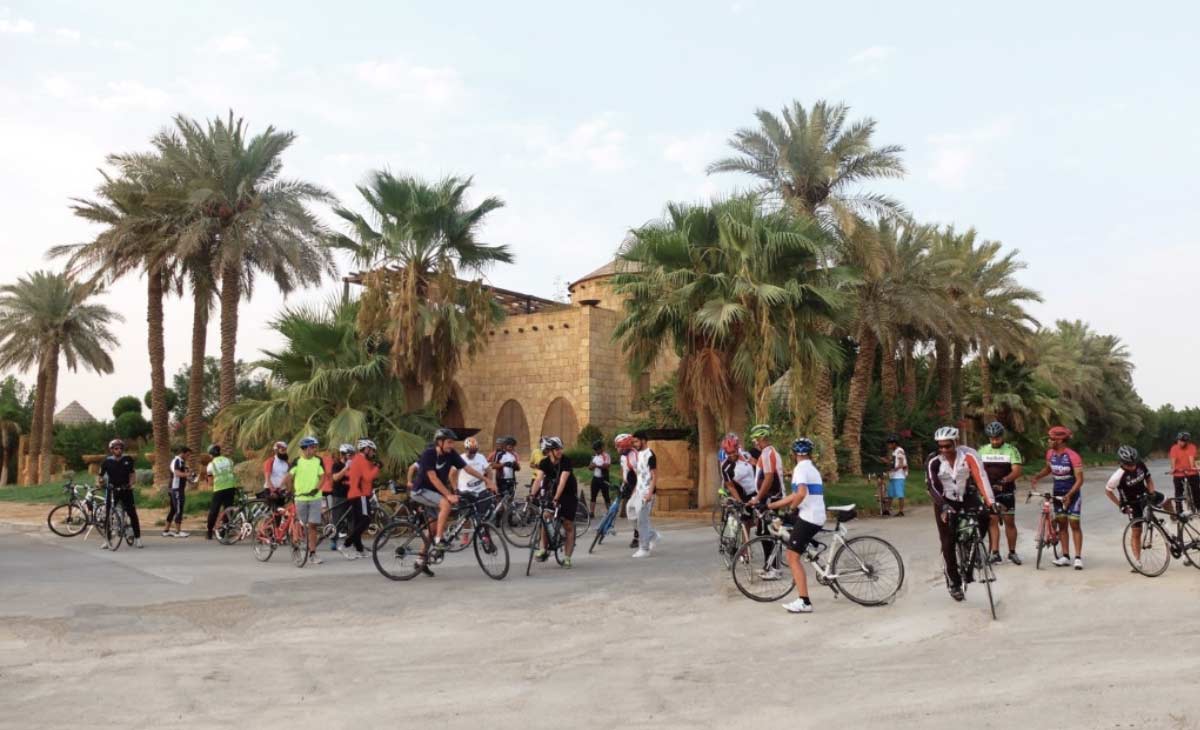 If you’ve just arrived, head for Wadi Hanifa – a 120km stretch of oasis for cyclists and pedestrians alike that cuts through the middle of Riyadh’s sprawling cityscape. “Wadi Hanifa valley has a long, beautiful road that crosses the entire city from south to north, and is one of my favorite roads to cycle in Riyadh,” explains Omar. “It is mostly free of traffic during early mornings and at night, and is full of green scenery. A lot of cycling groups use it to ride on an almost daily basis.”

Further out of the city, approximately 90km northwest, lies the Tuwaiq Escarpment, better known locally as the ‘Edge of the World’. More suited to a bike with fatter tyres, the landscape surrounding the steep cliffs provides excellent MTB riding opportunities. “The Edge of the World is really popular among foreign visitors and cyclists in general,” says Omar. “The scenery is unlike any other, although it does look familiar to the Grand Canyon in the US. The cliffs are accessible via many different routes, but if you’re heading from nearby Sadus, it’s just a short 30km ride to reach them.” 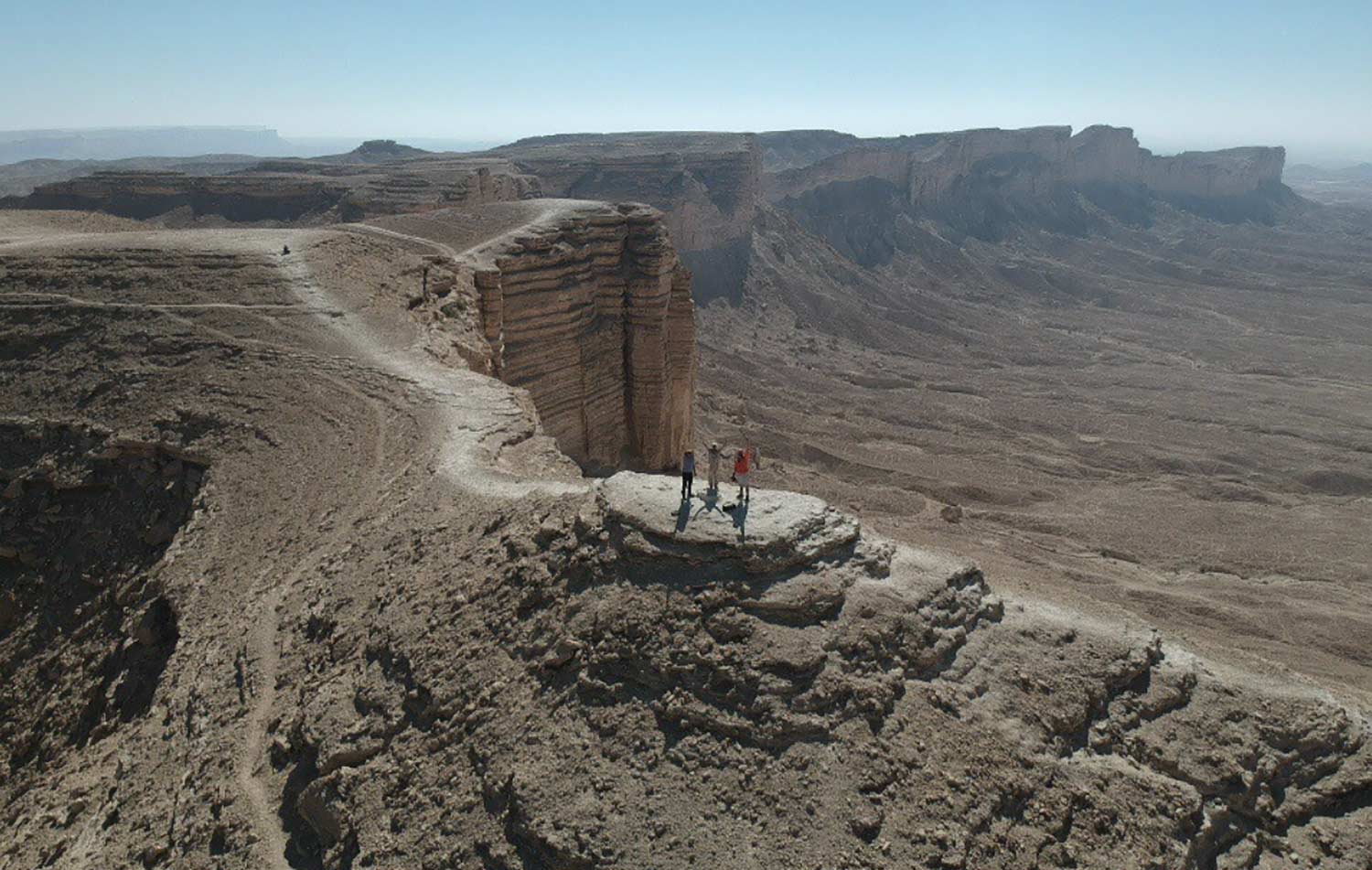 There’s boundless scope for adventure in the deserts surrounding Riyadh and, according to Omar, “Encounters with other cyclists adventuring by bike are becoming increasingly regular, thanks to the endless desert roads that criss-cross the landscape. Wild camping too is on the rise, and is widely accepted providing the area is not fenced off.”

“If you ever need help, you’ll invariably find the Bedouins out in the wilderness,” says Omar of the famous nomadic people which roam the desert herding animals and trading goods. “They will gladly help you out, and even though they may not understand you, they’re sure to offer a hand if you’re in trouble.”

“People in the Kingdom are passionate about coffee,” says Omar, “and speciality coffee shops are all around the city. You should try the local Arabic coffee – with some sweet dates to accompany it. It’s the best experience.”

If you’re looking for a quintessential Middle Eastern dining experience, head for Nadj Village in the north of the city. You’ll find genuine Saudi food in a traditional village setting that feels strangely at odds with the restaurant’s urban location. Plus, the 14-course set menu includes coffee, dates, and incense for SAR100 (roughly £20).

In terms of cycling hangouts, don’t forget about the Darrajati cycling club ride, an organised ride that leaves from Diriyah, a historic area to the west of the city, every Saturday. Visit their website to find out more.

We discover the secrets of adventure cycling in Antwerp, with Adventure Local ride guide Jeff Lockwood.

We discover the secrets of adventure cycling in Nagoya, with Adventure Local ride guide Sean Breslin.