How did the world map illustration come about?

Tori from Apidura wrote to me last year to say how much she liked the storytelling maps I made about my Scotland-to-Cambodia ride. There was no prescriptive idea for the artwork, except that it would ideally be something that showed bikes connecting people.

Did you have a clear idea of what you wanted to achieve with that brief, or was it a case of seeing how the map developed as you went along?

I always start with an idea, but I never really know how it’s going to look exactly until I am well into the drawing. My initial idea for this project was a world map, which somehow showed that bikes can connect people across our planet. With that in mind, I began drawing the world map with no international borders, as lot of the rides depicted on the map cross many of these borders, connecting countries, people and places.

How did you decide what features to include on the map?

Well, I wanted to relate the map specifically to Apidura, so I researched the brand ambassadors, and some of the places they had taken their bikes. These places were incorporated into the map, along with places I’ve been on some of my own trips, and some legendary routes, like the Road of Bones in Siberia or the Karakoram Highway in Pakistan, for example.

Where did the quotes and words of wisdom come from?

Again, the quotes you see are either my own, or taken from the Apidura Ambassador pages.

How do you hope ‘World by Bicycle’ will make people feel when they look at it?

I just hope that it makes people realise that you really can take your bike anywhere! Everything I’ve illustrated on the map is there because it’s already been ridden; it’s a known route. But there are always opportunities for cyclists to go out and create new routes and adventures – ones that have never been ridden before. The sky is the limit! 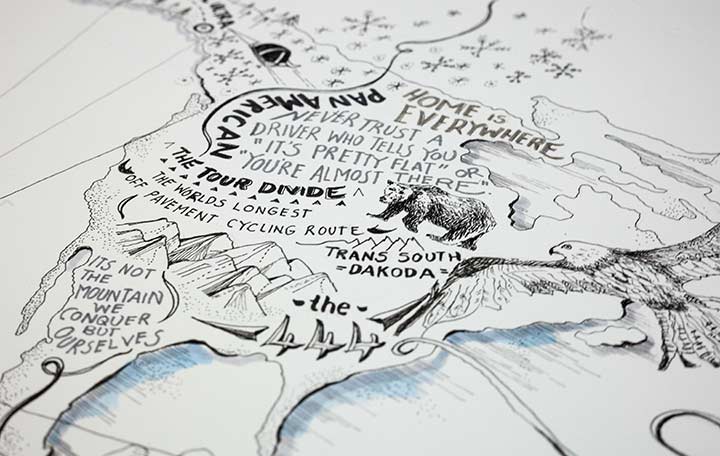 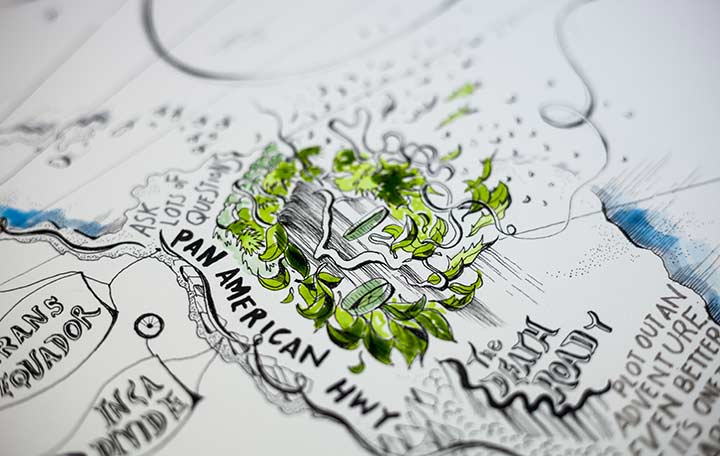 Are there any features of the illustration that you’re particularly happy with?

Not really, except that I am really happy with it! It’s already had lots of positive comments online, which shows lots of people are into earth, bikes and adventuring. That’s great to see.

Where can people follow you and buy your artwork?

I sell copies of my illustrated book “Borderless – the Story of a Two Wheeled Adventure” on my website, where you can also find information about my commercial work.

A profile of mountain biker, author, and National Geographic 'Adventurer of the Year', Shannon Galpin.