Transiberica’s Badlands is a 750km gravel race that crosses some of the most remote, diverse and challenging landscapes in Europe. For the 2021 edition, riders made their way from Granada through the Sierra Nevada, Gorafe Desert, Tabernas Desert and Cabo de Gata Natural Park, finishing close to the Veleta Pass. Watch below to see how this year’s race unfolded and scroll down for some insight from Marion Dwiznik into how she became the first female finisher.

Badlands was not only my first off-road multi-day ultra but also my first solo multi-day race.

Before starting the race, I had a stage plan that I followed almost exactly, but I had miscalculated the amount of time I needed for each stage. I was much slower than I had expected, so I tried to make up for the lost time with fewer breaks and less sleep.

On the first day, I deliberately didn’t look at the tracking at all. I wanted to give myself time to build into the race, as the heat and number of other riders overwhelmed me to begin with. On the second day, I started regularly checking my position in the field, especially in relation to the other women in the race.

When I checked the tracking towards the end of the second day in Tabernas, I saw for the first time that I was currently the leading woman and that the second woman, Olivia Dillon, appeared to be taking a break in Gorafe (about 15 km behind me). It was already dark and I knew Olivia had a very technically demanding section ahead of her. If she continued into the night, she would be very slow on this section, so I figured that was my chance to break out. I rode through the night and pulled through to the Mediterranean. I think that was the decisive move that led to my victory! 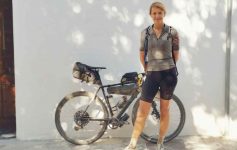 An introduction to the inaugural edition of the TransAm Bike Race