Beer in Agadir: Joining the Party Train at the Atlas Mountain Race

The inaugural Atlas Mountain Race saw the customary high scratch rate we’ve come to associate with races organised by Nelson Trees. Remote, hard terrain broke bikes and riders and our own Chris scratched after four days and a dose of food poisoning. Scratching is normally considered the end of a race, but we prefer to think of it as the start of a new adventure – and not all scratches are created equal. Here, Chris tells us how he turned his scratch into a positive, transitioning from race to adventure and making some new friends along the way.

My scratch was slow and drawn out. Food poisoning struck on the most remote section of the route, and after a sluggish ride to Tazenakht two days later, time pressures forced my hand. It was now impossible to follow the race route and get to the next checkpoint in time, let alone get to Sidi R’bat to pick up my bike box in time for my flight home. I had officially scratched and my race was over.

Scratching is a double-edged sword. On the one hand, the pressure very suddenly eases and you’re flooded with relief, but on the other, there’s a real sense of loss. Everything that you’ve trained for and invested in the race feels wasted. It’s all too easy to simply throw in the towel entirely and find the nearest and fastest way home. A sense of wanting to distance yourself from the perceived failure of your race.

But with all of that investment made and your holiday booked, the scratch should be seen as a beginning, not an end. This is your holiday. Would you rather spend it in the back of a taxi, looking out at the land you should be exploring, or on your bike? True, there may be circumstances that prevent you from making your bike rideable or letting your body recover enough to ride in time for your journey home, but if you can ride – ride! If you can’t ride, find somewhere to recover nearby and take in some culture. Who knows when, or if, you’ll be back again.

Sitting having breakfast in Tazenakht, I started sketching out a simple on-road route to the finish line, broken down into chunks to fill the remaining time I had. Sticking to the road would mean progress was easier and the distance was significantly less than the race route, so timing shouldn’t be an issue. As this was now a holiday and not a race, I would spend the nights in riads and stop frequently along the route to eat proper meals.

As I was getting to leave, a small peloton passed in front of the café, heading in the direction I was planning on going. Clearly, I wasn’t the only person determined to turn their failed race into an adventure! I packed the bike as quickly as possible and set off in pursuit of what I would soon learn was the ‘party train’ of scratched riders cycling with a singular goal of ‘beer in Agadir’.

Over the next three days, I saw and experienced more of North Africa than I had in the previous four. We ate good food, rode easy, enjoyed the descents and took each other’s minds off the disappointment of scratching from the race. It was a very different experience to the one I signed up for, but one that will stay with me just as long.

We separated on the climbs, riding at our own pace and regrouping on summits to drink in views and at cafés to enjoy saffron tea and omelettes. Time was no longer a precious resource and we napped in the shade while punctures were repaired and Instagram feeds updated.

The descent to Talouine was one of the best I’ve ever ridden – an oasis of pristine tarmac amongst all the broken roads. Steep enough that my highest gear immediately span out, with sweeping corners that could be taken at full speed. A true cycling nirvana, hidden deep in the desert.

That night we feasted on tagine, asking the auberge owner to prepare the biggest dish they had and then sending it back to be refilled when we were done. I lost count of how many times I went back for seconds, my body now fully recovered from the food poisoning so I could really appreciate the flavours and quality of the local cuisine.

The following day, we ended up lost in a small village, trying to find a café and some tea. Quickly, the children of the village were upon us, begging, playing games and revelling in the novelty of strange visitors on bikes. The café was understocked, and we ended up stopping again not long after, but being chased through the village by children on foot and on bikes was a special experience well worth the diversion. The squeals of delight as they encouraged us to race, then tried to catch up for a high five.

Our hotel for the night was at the centre of the walled part of Taroudant, down a winding path bustling with locals going about their business. It was much more upmarket than we had expected and we lived the good life for the evening, enjoying beers by the pool and another incredible tagine. We had arrived early enough that there was time to explore the Medina and its many shops, sights and smells and I whiled away a couple of hours getting lost in the back streets taking it all in. 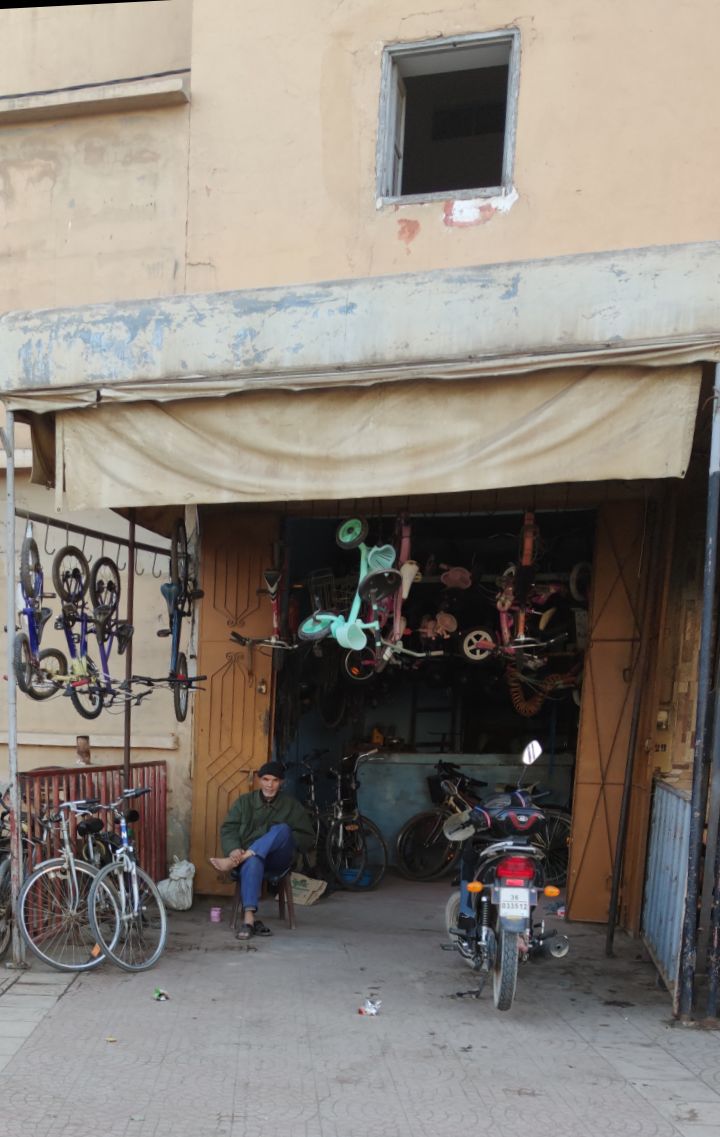 On the final day, with the end looming, I found myself looking for excuses to slow down, to draw it out and wring out every last drop of enjoyment possible. Whilst sat in some roadside shade, a young boy approached, pointed at my bike and asked if it was mine. ‘Oui, c’est mon velo’. He then pointed to my bike, to himself, and mimed pedalling. I laughed and nodded. He was clearly on his way to school, we were next to a long, straight road, what harm could there be?

After riding back and forth a few times, he approached me and started saying something about my bike and his house. My French wasn’t good enough to understand, so I shook my head and told him ‘le velo reste ici’, hoping he’d understand. Maybe he did, maybe he didn’t, but he suddenly rode off around a corner and I started to panic. Had I just allowed my bike to be stolen a few miles from the finish? I ran around the corner and found a sheepish child only too happy to hand over my bike. He giggled and ran off in the direction of the school. I breathed a sigh of relief and figured I’d better hurry up and make my way to the finish.

Overcoming the temptation to throw in the towel and hitch a lift to the finish was difficult, but it was the most rewarding thing I could have done. True, there won’t always be a peloton of scratched riders around to share the load, but a bad day on the bike is better than the best day in the back of a taxi.

A handy guide to bikepacking with your family, including advice and insights from experienced tykepackers.

Bikepacking Moments in the City

City stays don’t have to mean no adventure. With a bit of preparation, you can adventure local.