Apidura Ambassadors Ed and Marion Shoote ride the forgotten provinces of Tibet, and catch a glimpse of history.

The big challenge of the trip was the Tro La pass: a gravel road that stands around 5050m and the highest pass we’d done anywhere. The night before, we camped at a Holy Glacial lake about 25km from the summit. The lake was a beautiful spot: flanked by tall peaks and snowy glaciers, it had prayers carved into the stones around it.

We slept well and started the climb early. It was a steady gradient and I’d love to say it was a huge, epic challenge but we took it slow and the top seemed to come much easier than we both expected. The view back down the valley was above average. 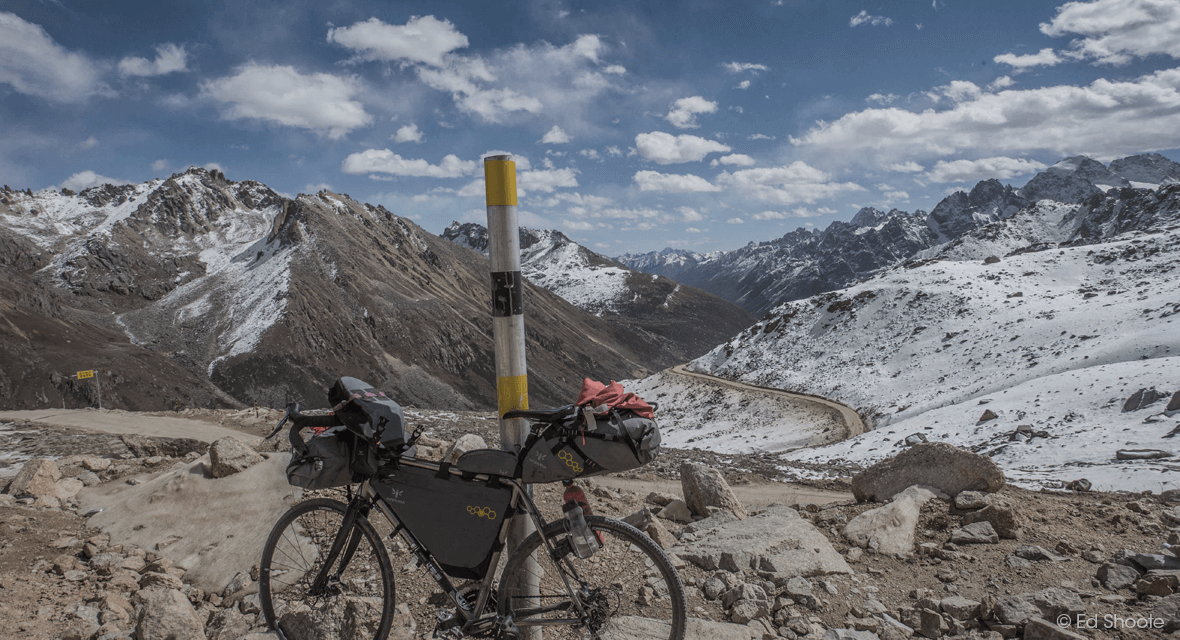 Our lightweight kit was a blessing given climbs like this. The cycle-tourists who do this with five pannier bags must seriously suffer. The descent was more direct and heroic than the climb, as it zig-zagged directly across a very steep face. The idea of getting one of the buses back up those narrow hairpins put butterflies in my stomach. I was glad to be on the bike. I started to enjoy the descent and even overtook some tankers on the way down, an experience not to be repeated. 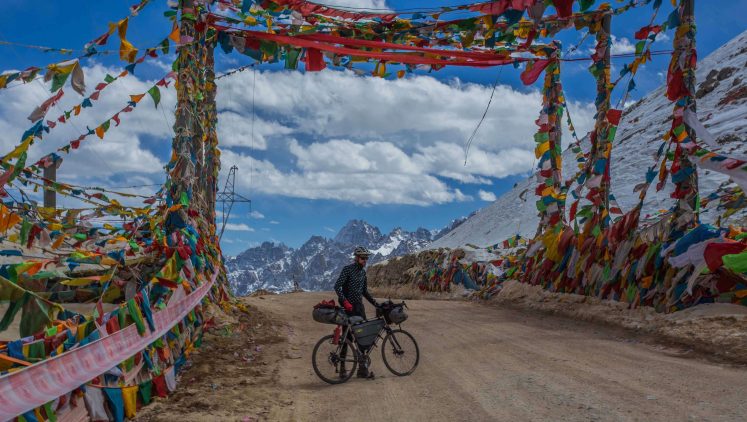 It was then we decided to find the mythical Yarchen Gar Monastery. We knew we needed to explore this place as its future is so uncertain: the Chinese are increasingly nervous about big assemblages like this. It sounded amazing, unique and very few foreigners have ventured there.

A taxi driver set us off on the right road before we finally saw a sign. Also, the vast city of 10,000 burgundy robed monks and nuns told us we had arrived at the world’s largest Buddhist Monastery. As we pushed our loaded bikes up the final steep grassy bank, I wasn’t prepared for the scale of what lay before us. At an altitude of 4000m and miles from any other settlement, a single storey shanty town lay encircled by a meandering river, its skyline punctured only by vast temples. Coupled with the setting sun, it’s one of those moments we’ll never forget. 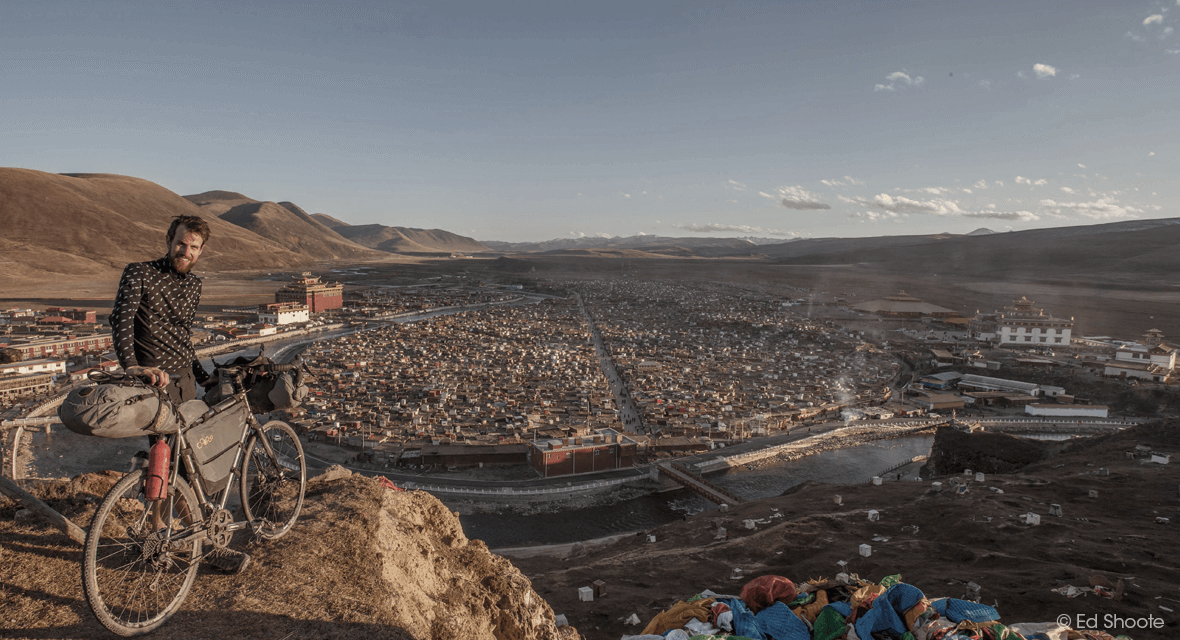 By the time our water had boiled, the tent was frozen solid. It was going to be a cold night. A monk walked by and offered us a place to sleep. We followed him to his home and into a cosy prayer room. It was warm and perfect. He would sleep in his meditation box on the roof, leaving us to eat dinner and sleep. While I was out ‘experiencing’ the communal toilets, he came back down with, unexpectedly, an instant cappuccino. As a thank you, I gave him a large pomegranate. He then gave me a ceremonial dagger, along with a sticker of a famous Lama. Surreal is an understatement. In the morning, he checked we were OK and went off to prayers. We let ourselves out and never saw him again. Such a kind man and what you want to believe all Buddhist monks are like! 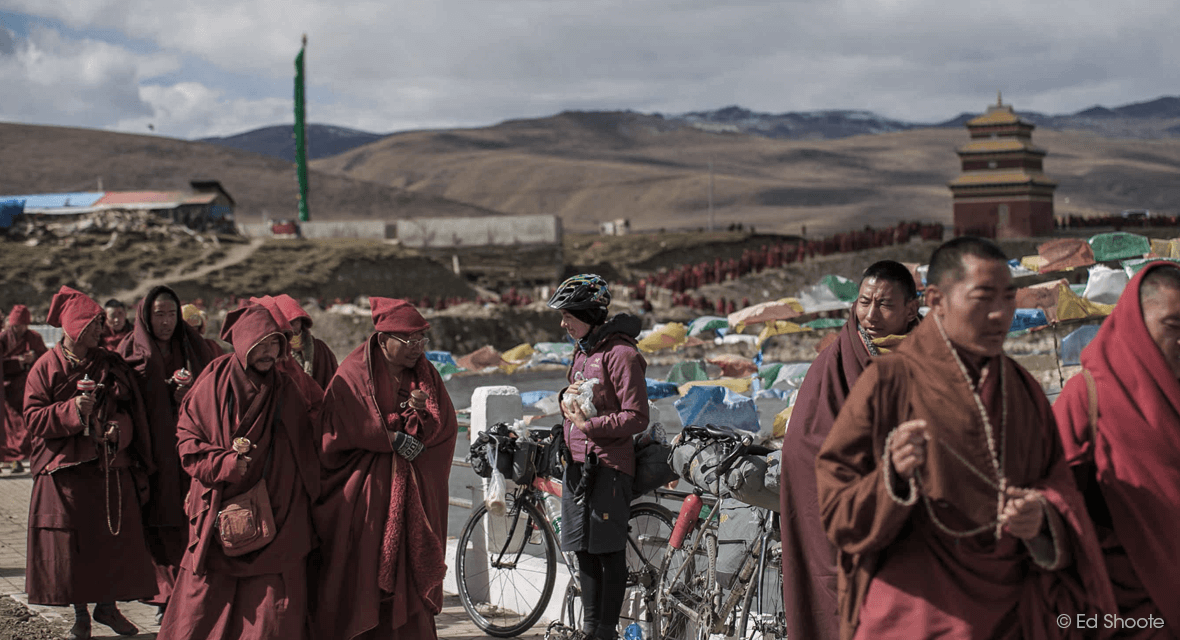 This trip was made by the Tibetans we met. Some were staring and indifferent but most were awesome to us. A quick “Dalai Lama” and thumbs up made friends for life. One particular act of generosity saved us. 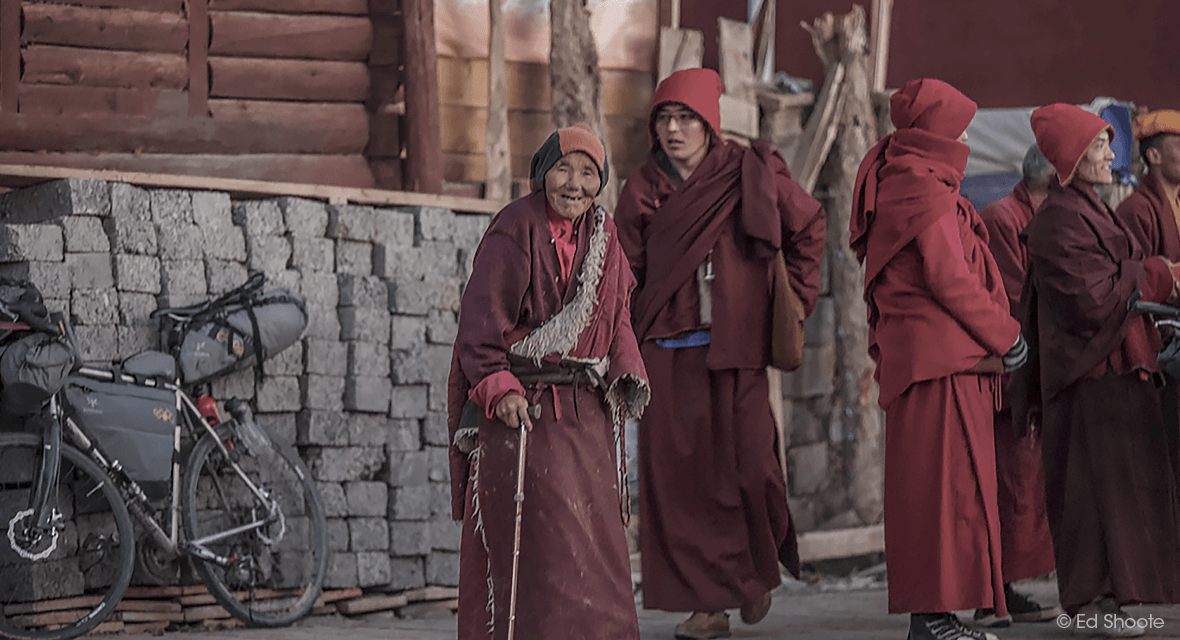 On the last day riding I got sick. Whether it was the homestay with the naked Lama (I’ll explain another time) or the Tibetan feast we gate crashed, I’ll never know. We were camped in an isolated spot and by morning it was clear I was struggling. I was really sick. Between us and civilisation lay a ride of about 600m vertical over 20km. The only option was to ride it (although I tried to borrow a horse without success). With rehydration salts, cola and dextrose the only things staying down, it was a struggle. Pedal stroke by pedal stroke I inched closer. Just 5km away but I was done. I staggered onto the ground. I knew I would pass out if I carried on. As I lay back watching stars, a miracle pick-up truck drove by, stopped and offered us a lift. Bikes in the back we were set. When we got back to Kangding I was elated. To celebrate, I stumbled out and vomited behind some bins. Marion was so proud.

I had never been happier to crawl into a hotel bed and sleep. What a trip. It almost destroyed me but what a part of the world to ride a bike across. It is developing and changing fast and I’m glad I didn’t leave it any longer before going to this part of Tibet. What are you waiting for? Book some flights now!

Another Journey Beyond Film

Marc Maurer is cycling around the world - in stages. This film follows his journey through the mountains of Central Asia.