Apidura Ambassadors Ed and Marion Shoote ride the forgotten provinces of Tibet, and catch a glimpse of history. 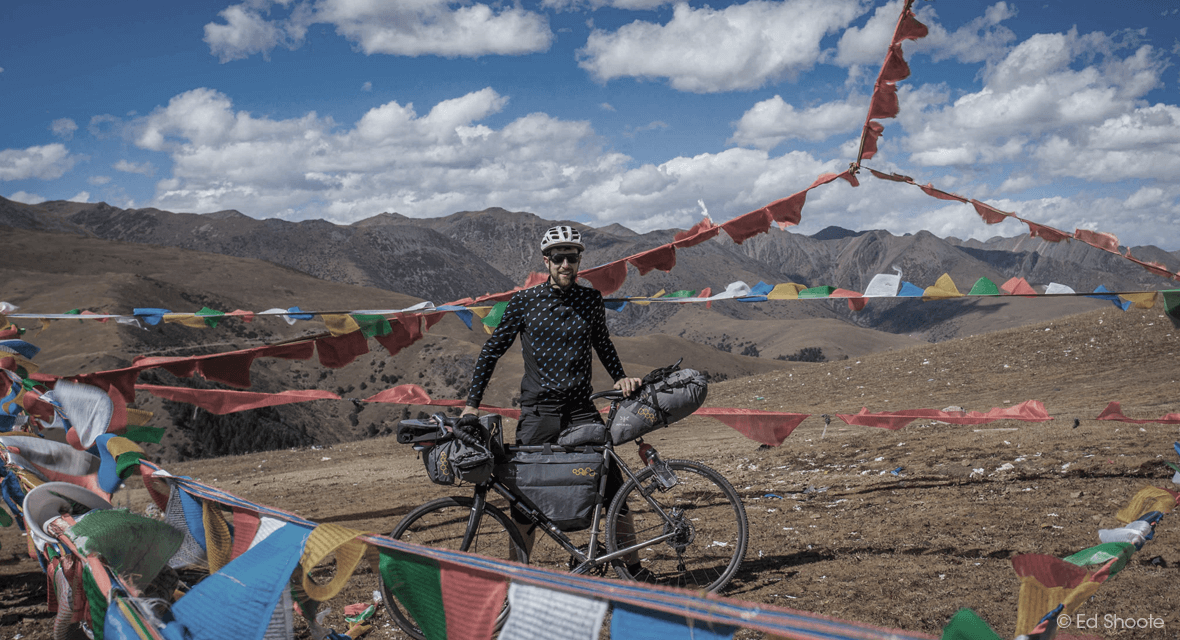 It seems I am addicted to the remote, mountainous regions of the world.

I fear they will soon be changed forever and am keen to explore them before their culture is diluted or their architecture replaced by concrete. I have ridden in about 50 countries since I started touring; if I had a list, this trip would be at the top. We were heading out to ride across an open corner of Tibet, hoping to find traditional Tibetan culture still strong in the mountains.

Our 1000km loop was an unforgettable adventure and filled with the kind of randomness that drives me to keep exploring. We met about 5 people who spoke any English over 3 weeks; a struggle at times but boy was it worth it! We hung out naked in a hot spring with a revered Buddhist Lama. We were guests of honour at a Tibetan festival with no idea what we were celebrating. I gave a monk a backie around a holy golden stupa. It was that kind of trip.

We started in Chengdu: a smog filled, vast, modern and characterless city. After a nine-hour bus ride that took us past construction sites and up into the mountains (2500m), we were in Kangding. This was where we unloaded the bikes and set off under our own steam. With Marion only just back on the bike after 4 months injury, I had to squeeze a lot of kit on my bike to help take most of the weight. Some new flared Midge bars let me fill the Backcountry Handlebar Pack totally full. Along with the bottomless Frame Pack, I loved my set-up. In contrast, Marion was super light: just the Expedition Handlebar Pack (14L) and the Expedition Saddle Pack (14L). It didn’t rain all trip though!

We’d found the best map available for East Tibet at Stanfords but, being 1:1,600,000 scale, it was awful. For example, it didn’t show that on day one we had to climb from 2500m to 3800m. Maybe it was for the best given this tough start. In hindsight, I should have been more tolerant of Marion’s claims she felt breathless as we spun uphill on day one. On the second night we slept at 4200m. Not being acclimatised, we were lucky not to have had any issues bar a sleepless night and a frozen tent in the morning.

We were riding on smooth tarmac through high altitude pasture, scorched brown by the autumnal dry season. It was filled with yaks; shouting “Yak attack, yak attack” each time one walked across the road was probably wearing thin with Marion (as was my adaptation of the B52s “Love Yak”). The thoughts that occupy your mind for long day after long day in the saddle are part of long distance touring and adapting songs to fit what I can see is one of the ways I enjoy the ride. Bon Jovi’s ‘Living on a bike’ is still my favourite.

The road had a frustrating habit of going up and down a lot, not often below 3000m but a couple of 4300m passes each day. I guess mountains do that. Riding the passes was hard work but the sense of reward at the top was more than worth it: views for miles and confused locals wanting selfies with the tall foreigner in funky lycra.

I loved the dramatic Tibetan prayer flags fluttering in the breeze everywhere. While I remember climbing up some spectacular 7000m peaks, the scale of the mountains meant the downhills went on for up to 60km.

The next day we left the Chengdu-Lhasa highway 318 with its endless military convoys and slipped onto a back road due north. It was great to be on our own, away from traffic, watching vultures circle and glide on the thermals. The Bearded Vultures can have a wingspan of 9 feet so it’s best not to take a nap anywhere too long.

The road meandered down through traditional Tibetan villages and, bar the mobile phones and electric cables, they were the same as centuries past.  The houses are huge with a ground floor for animals, living quarters and then a 3rd floor hay loft providing good insulation. The toilet is a wooden box sticking out the side of the 2nd floor; it’s best not to linger under them!

In one village, a huge gathering of locals dressed in their Sunday best was in full swing. Hungry and wondering what it was all about, we rode into the middle. At first, we were met with indifference but soon a guy took us under his wing. He guided us to a traditional Tibetan black tent where beautiful women in full traditional dress were coming and going. We looked at each other in nervous anticipation. What was going on inside? It turned out to be a huge meal and we were given a seat in the middle. So much food it was amazing; yak dumplings, bottomless cups of butter tea, weird roots cooked in pure fat, meat, home-made yoghurt and cans of traditional Redbull! I don’t know if they were joking, but they all watched as we were served yoghurt with chopsticks.

The temperature varied from -10(C) at night to shorts and T-Shirt weather during the day. On the descents, the cold air was freezing but my leg warmers did their job. The high-altitude sun was brutal: the UV rays dissolved my skin if I dared to leave anything exposed.

Apidura team member Jonathan Kambskard-Bennett discovers the joys of exploring your own backyard, and savouring the moment.