The horse plunged into the surging river, which had swollen with afternoon snowmelt. The rider looked relaxed, even as the water rose and swirled.

“Here we go” I thought, but the man rode downstream, far more interested in tending his sheep than hassling us for camping on his pasture. His straightforwardness was typical, and something we’d come to expect over the coming weeks.

Craig Phillips (Phelps) and I were camped high in the Tian Shan Mountains of China’s Xinjiang Province. A tumultuous region in the country’s far-flung west, the land is dominated by the vast Taklamakan desert and surrounded by peaks straddling China’s borders with Central Asia, Russia and Mongolia. We’d left Urumqi, the capital, early the previous day, riding south along Highway 216 before meandering into side valleys, eventually camping at a picturesque spot by a stream.

The next day, climbing through a gorge to the high pastures was idyllic, and exactly what I’d hoped to find. Urumqi had been chaotic, all big city noise, modern architecture and oppressive heat with constant police presence adding unease to the atmosphere. But up here, with a chill wind, impressive vistas and only a few shepherds for company, it was difficult to reconcile our surroundings with the world outside these mountains. 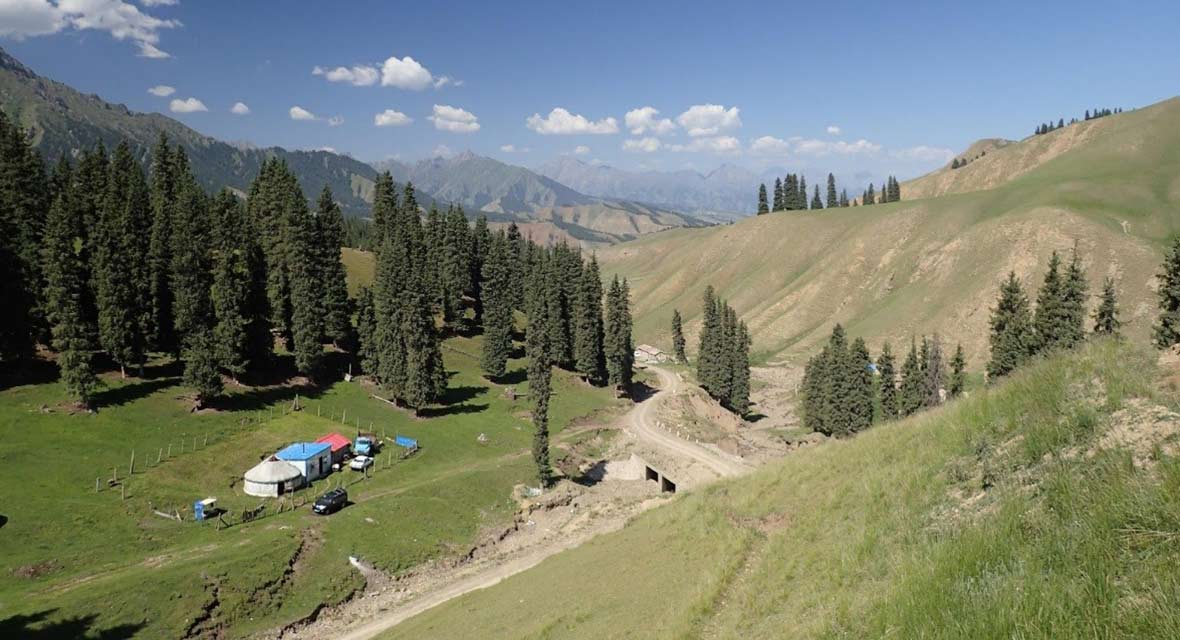 We reached the turnoff for Highway 218, where we’d planned to head west to strike through to the core of the Tian Shan. With Xinjiang being a part of China that is particularly scrutinized by authority, the local police were checking every vehicle and unloading buses, and after it became clear our original route was a no-go, we were instructed to ride to Korla, the next major town.

An old oasis town on the northern stretch of the Silk Road, Korla exists on the glacial rivers that feed the region, squeezed between the mountains and Taklamakan desert. Today, the wealth flows the other way, from the oil-rich lands of the desert to the cities. After venturing out and discovering that the route back to the mountains no longer existed, we returned to Korla, each rest stop for mutton pies and tea punctuated with an interrogation from local policemen. In Xinjiang, foreigners seldom go unnoticed. A bag search, then a photo check – we quickly realised that “we’re heading to Korla” was the right answer to their questions.

Later, we determined that our best chance to return to the mountains was from the town of Kuqa, a distant 300km away across the desert.

Our intel suggested the route would be spent on a long, high-speed motorway, but Phelps was keen to give it a go. Saddling up, we zigzagged through a narrow ribbon of irrigated landscape, before said motorway became the only way forward. After several hours, we spied an exit as a finger of green appeared. Approaching a checkpoint as evening thunderstorms rolled past, another protracted interview followed:

“Where are you staying tonight?”

“Which hotel do you recommend?”

We were getting better at this!

We would be denied repeatedly as we attempted to reroute from the motorway. Finally, we had had enough, and decided to jump the fence and head north, entering the barren rock landscape of the mountains.

The trucks passing us suggested our chosen route led to a mine, the double track snaking across dry riverbeds and abandoned buildings. We reached Highway 217 before dark, a power station belching acrid smoke it had processed from a massive open coal pit in the distance. As it began to rain, the dusty track turned into a muddy concoction of dirt, coal dust, and diesel, huge trucks churning it into axle-deep bog like a scene from Mad Max. Exhausted, we found a room to hole up in. I asked about a shower and was shown next door to the miners’ ablution block – a room the size of a basketball court, housing hundreds of shower heads.

I chose one and enjoyed the solitude.

Riding further up Highway 217, we started meeting domestic cycle tourists, vacationers from the eastern provinces who had travelled to the wild west to ride ‘the most beautiful road in China’. The scenery morphed as the road ascended; past alpine lakes and snow capped peaks, faux yurt encampments began to appear. So, too, did lakes filled with pedal boats, pony rides, and selfie sticks. All the time, the riding was fantastic – cool, clean air, vistas, and perfect tarmac. Even the police casually waved us through.

Something fundamental had changed, and I finally relaxed.

All change on the western frontier

The change couldn’t have come soon enough. After a series of big climbs, tunnels, and descents, we pedalled into an endless basin of green surrounded by mountains as far as the eye could see. We had reached the Bayanbulak Grasslands. After a few idyllic days, one huge, last descent dropped us onto the plains on the other side of the Tian Shan.

From there, it was only 300km back to Urumqi. Along the way, large tracts of melons, cotton, and maize stretched out for kilometres. That evening, we rolled into a small town, where we followed the smell of grilled meat to a local restaurant. After finding a room, we settled in for cold beers and a satisfying dinner of shashlik, a barbecued lamb dish dating back to the region’s original Turkic settlers. It was a Friday, and from the sound of it, that meant ladies night.

It took all morning to get back into our hotel in central Urumqi. It had been a challenging few weeks, shifting expectations and accepting what was on offer. There were days I’d never want to repeat, but ultimately, they made the trip and it was during those moments we gained an insight into life in China’s far west, shoehorned between the mountains and desert. It was evident that a new story is being created in this land, a place on the edge of existence, old cultures being overwritten again as new ones extended their grip.

GCN's Simon Richardson is joined by Mark Beaumont, as the pair ride 500 miles of Scottish Coastline.

Stephanie Dietze recounts her bikepacking trip to Iceland, on a unicycle.