Jack Thompson explores the island of Taiwan, with some long days and serious climbs 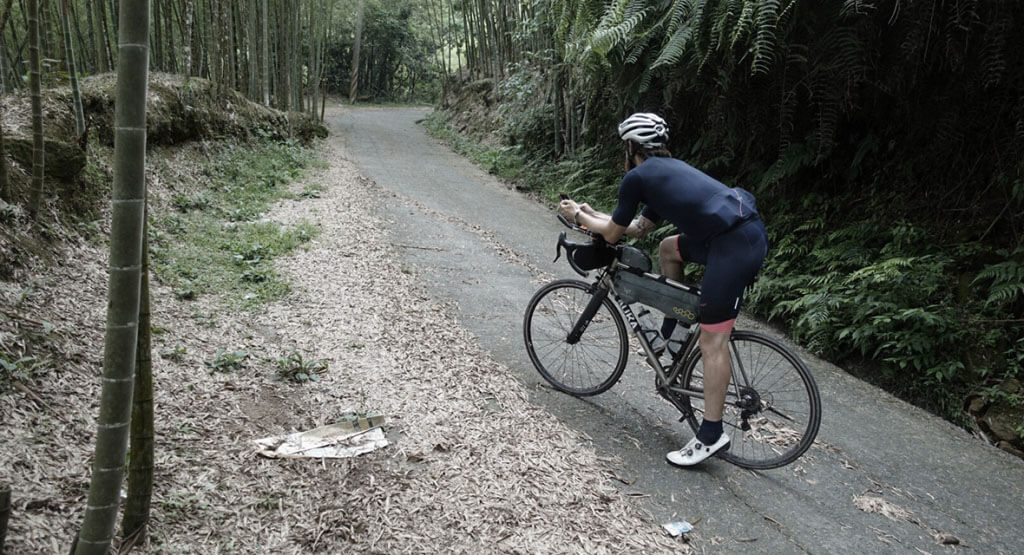 With nothing planned but a rough 1,600km route, and a return flight home booked for five days after his arrival, Jack Thompson headed to the East Asian island of Taiwan. We caught up with Jack upon his return and discovered that the experience provided every bit of the adventure he had hoped for.

‘My initial plan for 2017 was to set out across Australia and set a new Unsupported Trans-Australia World Record. My training and preparation was going incredibly well, and in January this year I completed a partial recon ride from Perth to Adelaide in order to guide my planning, but with the unfortunate passing of my close friend and fellow ultra-endurance cyclist, Mike Hall, during the Indian Pacific Wheel Race, it no longer felt right. As such, I made the decision to postpone the attempt and plan a new adventure.

I have always wanted to explore India. There is huge appeal with its bright colours, friendly people and vast landscape, but the problem is that it is also an enormous country, and with limited time and resources, picking a start and finish point for an adventure was incredibly difficult. This got me thinking about smaller island countries that I could venture to and potentially complete an entire lap of.

There are a number of pre-requisites that I have for all of my trips, which are that it mustn’t be touristy; physically, the riding must be challenging, and there must be a mentally challenging element too. Taiwan seemed to tick all of these boxes.’

How much planning and preparation was involved?

‘When planning my adventures I like to keep things wide open, and Taiwan was no exception. Prior to departing Australia, I planned a route that would allow me to take in some of the most difficult terrain the island has to offer, but aside from this and a return ticket home nine days later [you must have a return ticket booked upon entry into Taiwan] there was no plan.

In my mind, I had set a goal that I wanted to complete the 1,686km in five days, and I knew that this would equate to approximately 337km/day and about 5,664m of elevation gain. However I wasn’t set on completing the same distances every day, and one thing that caught me off guard was the steepness of some of the mountain roads. In certain sections, I was climbing gradients of 44% and this slowed me down incredibly.

As a result, I spent extremely long days on the bike, starting well before sunrise and finishing well into the night. I hadn’t expected to have to do this, but once I had set myself the challenge of completing the ride in five days, I felt as though there was no stepping down. In some ways this meant that the ride turned into something akin to an endurance race, but this also added an element of adventure.’

Learn more about how to plan a bikepacking trip

Taiwan is said to be a place of extremes. Was this apparent when riding through it?

‘Taiwan is certainly a place of extremes. The population density is one great example, as it has a population of 23.5 million people and a total inhabitable area of 36,193km2, the population density of Taiwan at 650 people per km2 is 210 times greater than that of Australia. It’s hard to fathom, especially when on top of this you factor in that the majority of the population lives along the west coast, while the centre of the island, ‘The Central Highlands,’ is far less populated and remote with its 286 mountain peaks in excess of 3,000m.

Because Taiwan is a relatively small island, surrounded by the North Pacific Ocean and also within a tropical climate zone, the weather is frighteningly unpredictable. This caught me out when climbing up to a 2,800m pass through the night on day two. I left Xinyi, a town at the base of the mountain, at around 5pm, and the weather was fine – although it was forecast to deteriorate). By the time I reached the summit some five hours later the weather was so violent that at times I feared that I may have to press SOS on my emergency SPOT Tracker. But luckily enough at the summit, I stumbled across a small hut for mountaineers, inside of which was a portion of bed that I had to share with 6 others. I had one of the best night’s sleep I can remember.’

What sort of reception did you get from the locals?

‘The Taiwanese are incredibly friendly people. I remember on day four I arrived late into a city on the east coast, Hualien. I spent close to an hour searching for a bed that night and finally found a small family-run hotel down a back street in the centre of town. The elderly mother and father running the hotel were so excited to see me that they immediately jumped on the phone to contact other family members and before long, from deep within the hotel, family member after family member came out into the reception area to greet me. It was quite incredible.

Also, to my amazement, the roads were the safest I have ever ridden on. All roads have a dedicated car, scooter and bike lane and no one deviates from their designated lane. From a cyclist’s point of view, it was perfection. I was not once honked at by a car and never felt in danger.’

‘I am a huge fan of Asian food, and in a previous life used to be vegetarian. As such, Asian-style cuisine has become a common theme when eating out at home, and while I am no longer vegetarian, I still love to eat Asian food. It’s healthy, full of colour and interesting on the palate, and Taiwanese food is no exception.

Traditional ‘hot pots’ seem to be pretty popular. These are basically a small pot of boiling salty water in which you cook various ingredients, such as meatballs, vegetables and rice. It’s not your standard Western breakfast, but it’s incredibly tasty. Then you have stinky tofu, which is fermented tofu, and a local delicacy that’s generally sold at night markets. I’ll be honest: it smells disgusting, but tastes incredible, and is always washed down best with a cold, sugary ‘bubble tea’.’

What’s the best road on the island?

‘My favourite road on the island was between Hualien on the east coast and Wuling Farm, which is the highest paved peak in Taiwan. The road itself is approximately 140km in length and includes a 120km climb from sea level to 3,417m, but the view is amazing. You pass through small tunnels with water dripping from the roof, and next to drop-offs at the side of the road which fall away into enormous gorges. The vegetation changes from jungle on the lower slopes to barren grasslands near the peak, where the final 10km ramps up to gradients of 23% – not easy after the 110km of climbing preceding it.

Had I not been trying to reach Taipei the day I climbed Wuling I would have loved to have spent an entire day exploring the mountain roads. For those wanting to travel to Taiwan, I highly recommend basing yourself in Hualien and spending time exploring this region of the island. It is incredible.’

How does the experience of an adventure like this differ from that of an ultra-race?

‘To be honest, this particular adventure didn’t differ greatly from that of an ultra-race. I packed incredibly light, spent long days on the bike, ate lots of sugary food from 7-11 stores and at times wished that I could have slept for longer!

But there was no pressure for me to reach certain checkpoints for a brevet stamp, no one chasing me, nobody for me to chase, and no set route that I had to follow. Adventure racing is great and I really enjoy it, however, what I really enjoy about adventure cycling is the unknown, and as such, I don’t like having to follow a set path.

Throughout my time in Taiwan, I spotted lots of small paved roads that went deep into the jungle, and if I had been racing I wouldn’t have had the opportunity to follow such roads and explore. I also love capturing memories of my adventures with photos, and in a race environment, it’s just not feasible to stop and shoot images every few hours.

What advice would you offer to anyone thinking of a bicycle adventure in Taiwan?

‘I would first say to anyone that they are free to contact me on my website if they need any advice. Having already completed a loop of Taiwan I can help to plan people’s own adventures and point them in the right direction, depending on their ability.

Prior to my departure, I contacted the Taiwanese Cycling Federation (TWC), and they provided some incredibly insightful information with regards to my route planning, so upon completion of my adventure I met with them to share some stories and discuss my experience of cycling around Taiwan in general. One exciting outcome of this is that we are now discussing how to boost cycling tourism between Taiwan and Australia.

The beauty of the country is that, relatively speaking, its quite small, and as such you can ride through the mountains, along the coast and into the cities all within the same day. But, as I mentioned earlier, the weather can be unpredictable, so be sure to pack suitable clothing.

There are also fifty different species of snakes in Taiwan, so be prepared! I didn’t have any ‘dangerous encounters’, but I did see them – lots of them. I took a bivvy with me to camp in in case of emergency but in hindsight, having seen such a huge number of snakes, I would probably have preferred to have kept riding through the night. I don’t fancy the idea of waking up to a python spooning me…’

What pack setup did you use?

‘I packed incredibly light for Taiwan. Given the sheer number of vertical meters to climb, it was in my best interest to keep weight to a minimum, and as such I was able to squeeze almost all of my equipment into the Apidura Expedition Frame Pack (6.5L). I then used a Top Tube Pack to store food and snacks throughout the day and an Accessory Pocket on the handlebars for extra items that would not quite fit in my frame bag.’

Bob Barrett shows us how adventure can be accessible close to home, in this ride to Barrington Tops in Australia.