After the inaugural Karoobaix gravel race last month, Apidura rider Bregan Koenigsker decided to stay on in South Africa to explore some of the backcountry’s roads less traveled. His group set their sights on the time-forgotten valley of Die Hel, which needs no translation, and set off into the bush. 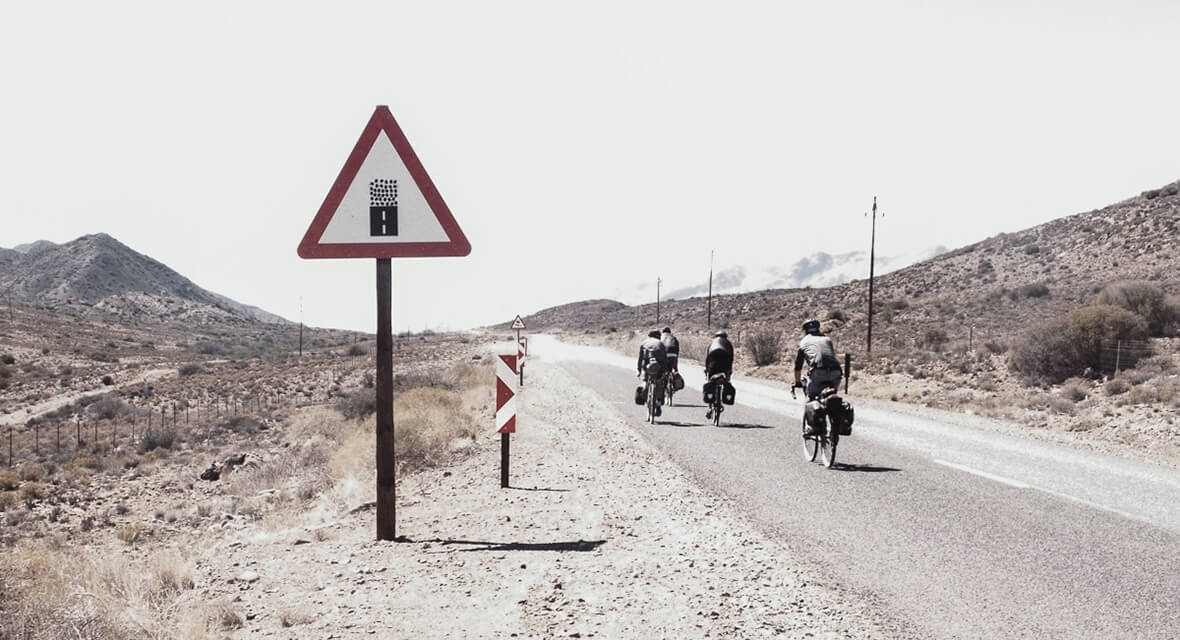 Last year, a friend and I came to South Africa for a bike packing adventure in the Klein Karoo region north of Cape Town, and were told by a local, as they guided us through the dust and sand, that if we ever returned we would have to visit a place he referred to as ‘Die Hel’.

The name stuck with me. Translating literally as ‘The Hell’, or ‘The Abyss’, Die Hel was said to be a narrow, obscure valley nestled in the Swartberg mountains, with a promise of adventure that was too much to resist. I had to go back, and for 18 months I was occupied with dreams – and nightmares – of what Die Hel would be like, until I was able to return with a group of friends and find out.

We set out from the town of Matjesfontein, battered and bruised from a 400km gravel race, the Karoobaix, which we had completed just hours earlier, but looking forward to five days of riding at a more leisurely pace. It didn’t take long for the challenges to present themselves though, and the first 150km through the Klein Karoo revealed it to be a lonely place indeed. The vegetation was sparse, the riding almost always technical, and the whole place was littered with the broken bones of perished beasts.

After a day and a half of riding, we camped on a hilltop 10km away from Die Hel valley. Wild camping is not strictly allowed in the bush, but considering the enormous size of the Klein Karoo its not likely to be a problem, as long as common sense is applied: Make sure that your camp is hidden and do not light any fires, as the arid half-desert could easily go up in flames. Dry riverbeds can make for excellent campsites, but beware if rain is forecast, and lastly, don’t camp in any animal reserves, unless you want a visit from one of the abundance of dangerous animals. Night descended quickly, and turned abruptly cold when the sun set, forcing us to scurry to our sleeping bags – some in tents, some in bivvi bags – as the temperature neared freezing. Our thoughts wandered to Die Hel as our bodies rested, and despite the cold, those sleeping out were treated to clear skies and an incredible starry night.

Eventually we reached ‘The Ladder’, which for hundreds of years provided the only way in and out of Die Hel for its residents. It begins as a rough trail spiraling downwards, but soon becomes merely a steep pile of rocks, giving way to boulders. It was slow going as we inched our way down the face, battling the sun and thorns, tentatively applying our brakes to manage the load.

It was so steep in places that we were forced to form a line and pass our bikes from one person to the next down the slope, which cemented my thinking that it is the social aspect of shared adventures that draws me to bike travel. Perhaps seven is a large number for such an expedition, mostly due to the restrictive size of cooking pots and the difficulty of finding wild campsites, and before this trip I would have thought it was too large. But, as it turns out, I was fortunate to have six like-minded individuals along for the ride, and our group of seven worked together perfectly, either handing bikes down a rocky slope or pitching up a campsite. Perhaps eight is my new maximum.

Emerging out of a small gully at the bottom of the descent, then climbing up a steep bank of scree, we finally found ourselves at the northern end of Die Hel Valley, but the panorama in front of us was far different to the pictures we had been carrying around in our minds. It was verdant, green, with small streams of crystal water snaking back and forth between ancient farmhouses. Though there were evidently people populating this strange landscape, we couldn’t see a soul, and the place exhibited an eerie aura that was felt by all.

We had imagined a dry, hellish outpost, but instead we had been met with a surprisingly luscious micro-climate. For hundreds of years the settlers of Die Hel had had to provide everything they needed for themselves, and it was not difficult to see how such a place could be self-sustaining. In a way it was a paradise, but at the same time it had always been confined by the small window to the world – The Ladder – which could now be seen snaking over the towering mountains that bordered us on all sides.

Exploring the depths of Die Hel, we came across a stream of clear, cooling water rushing down from the mountains, which had routed under the road and was collecting in a small pool to one side. Without hesitation we stripped and dove straight in, each of us marveling at the perfection of the moment, breathing in our existence, and exulting in the satisfaction of having worked so hard to get there.

We’d come in search of hell, but – as can so often happen on arduous bike tours shared between friends – we’d found paradise.

Adventurer Ness Knight tackled the deserts of Namibia in a solo bikepacking adventure. This is her story.

Apidura ambassador Jenny Tough speaks to The Gravel Ride Podcast about bikepacking and the spirit of adventure.