If you ask any ultra-distance cyclist for their best stories, the chances are that a lot of them will revolve around sleeping and bivvying. It’s no surprise – tired cyclists choosing sleeping spots in the dark don’t always make the best decisions and semi-urban bivvying means the chances of being discovered are high. Here are some of the best stories we’ve heard about bivvies gone wrong, strange encounters and unexpected happenings.

We always advocate familiarising yourself with every aspect of self-supported racing before your chosen event, but for Matt Swain, TCRNo3 would be the first time he actually used his bivvy. It’s safe to say things didn’t go entirely to plan.

I committed the ultimate newbie error of ignoring the purple Garmin line and after a while I found myself completely lost, way off course on my route to Reims and in an edgy looking part of whatever little town I was in.

I suddenly felt exhausted and decided it was time to bivvy for the first time ever. I rolled my bike into what looked like a churchyard. Exhausted and a little alarmed at hearing voices close by, I lay down in my bivvy and tried to sleep in the pitch-black night.

After what felt like a few hours, but was in fact only about 30 minutes, I was woken up by rumbling in the sky. Suddenly, lighting struck across the sky like a scene from the Exorcist, illuminating the crucifix on top of the church.  A few seconds later, a second strike lit up the pitch-black night and I realised two things. First, I was sleeping in a graveyard. Second, I was not on my own. There was a lone figure sitting close by, on the church steps. I was back on the road within 30 seconds, squealing like a five-year-old, bivvy semi stuffed in my back pocket. Not my proudest moment. 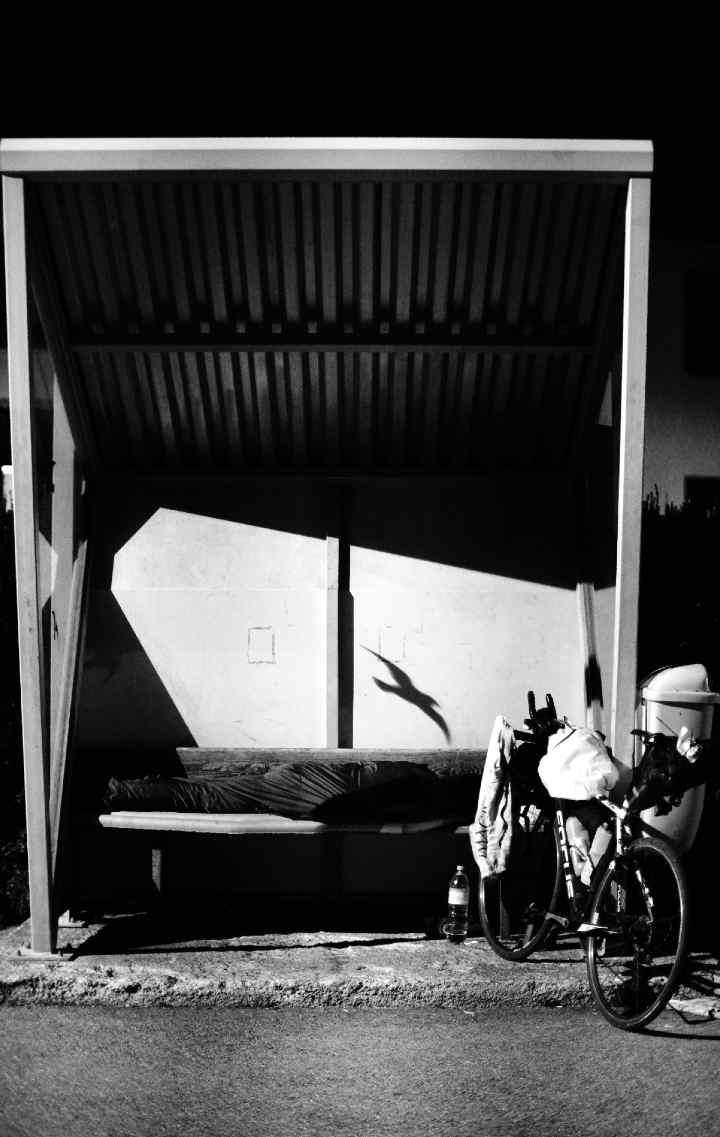 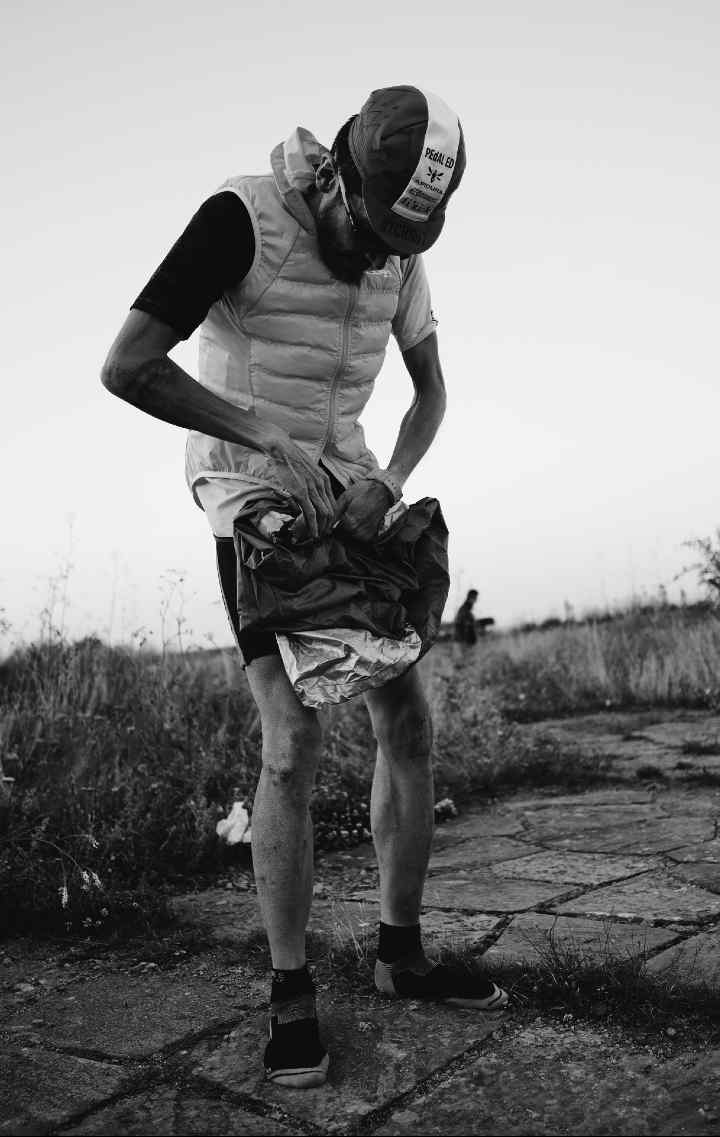 Torsten Frank is another rider that had a ‘religious’ experience while bivvying, this time on TCRNo5. After breaking his front rim in the middle of nowhere late in the evening, he recalled seeing a ‘strange house’ with a ‘blue neon cross on top’ only a few hundred metres back and decided to try his luck for the night. Confronted by a font and an altar, it became clear this was a monastery and Torsten decided against bivvying anywhere too obvious (or sacrilegious!) or attempting to wake anyone up to ask for help.

He found a half-open door, behind which was a boiler, building supplies and religious paraphernalia… and an upholstered quilt on the floor. Luxury for a tired ultra-racer! Having solved the issue of where to sleep, Torsten set about trying to find a way to get his bike fixed. He located the nearest bike shop, messaged them on Facebook in the hope they would see his message in the morning and went to bed.

In the morning, he was awoken by engine noises and a rhythmic honking. He decided there was no choice other than to wheel his bike out in front of whoever was out there and hope for the best. Luckily, the two monks were friendly and even drove Torsten to the bike shop, where he was able to get a new wheel and continue with his race.

Torsten’s experience perfectly illustrates the racer’s mantra ‘don’t scratch at night’. Faced with a potentially race-ending problem, he calmly found a safe place to wait until morning, did his research and managed to get his race back on track. It also reinforces that strangers are generally extremely helpful toward cyclists in need, no matter where in the world you are riding.

For Theo Daniel a routine bivvy on the final night of TCRNo7 went hilariously wrong when he stepped outside to check Trackleaders.

My hotel was 40km away – too far to ride so late, so I started looking for a warm place to sleep. I found a bank foyer that housed out-of-hours ATMs and settled down. It was hot, so I was in just one layer. Around midnight, I stepped outside to check Trackleaders. The door closed behind me, locking my bike and clothes inside! I had just my phone and the clothes I was sleeping in!

I called the police, but it would take ages for someone to come and help. They suggested I open the door with a bank card, but I didn’t have one. I managed to get a passerby to try to help, but it turned out you needed a bank pass card, rather than a bank card. Eventually, I managed to pull the door open just enough to get my bike and run. The police didn’t seem too bothered!

While sleeping indoors does guarantee more protection from the elements, it can leave you at the mercy of opening hours and at greater risk of being discovered and moved on. Many a rider has woken early to get a head start and been confronted by a locked door, delaying their plans by hours. It’s all part of the calculation any ultra-distance riders needs to make when deciding where to spend their night.

Of course, bivvying isn’t just for races and perhaps the most adventurous bivvy story we’ve heard comes from Eleanor Jaskowska, who decided on an overnight bivvy as the perfect first date.

After meeting at Bespoked and passing a few messages back and forth, I was intrigued to know more about this introverted character. He joined Audax Club Bristol on a 300km ride one Sunday and I saw my moment. I wanted to know how he’d come to sign up for the Transcontinental Race. Had he done much cycling before? ‘erm, a little bit, I rode my bike at uni and then did a season in Belgium’. Oh OK, so he’s pretty handy on a bike, but ultra-distance is a completely different ball game, had he ridden anything further than 300km? ‘well I did the Highland Trail 550 last year’, not giving much away then ‘yeah, it was OK, I won it’.

Clearly, he was most comfortable talking to me when we were both on our bikes, so I went tactical with my date suggestion – although he claims he suggested it! I was eager to try out my new kit, so we went for a bivvy date in the romantic location of Dursley golf club in the Cotswolds. Liam had ridden 400km that morning to help with the nerves. A swift trip to the supermarket for cans of G&T and a picnic and we went in search of a good viewpoint. He was so tired he fell asleep while I was talking to him! The following day we did a 100-mile ride around the Cotswolds for Chelsea buns.

Ter Experience; Why Designing Your Own Route Is a Risk Worth Taking

Scotti Lechuga unpacks her Silk Road Mountain Race experience and explores the impact it has had on her everyday life.