Earlier this year, Apidura ambassador Paul Spencer broke the Guinness World Record for cycling across Europe, riding from Russia to Portugal in 26 days, for a second title to add to the north-to-south record he broke in 2013. We caught up with Paul to learn more about his latest record-breaking ride. 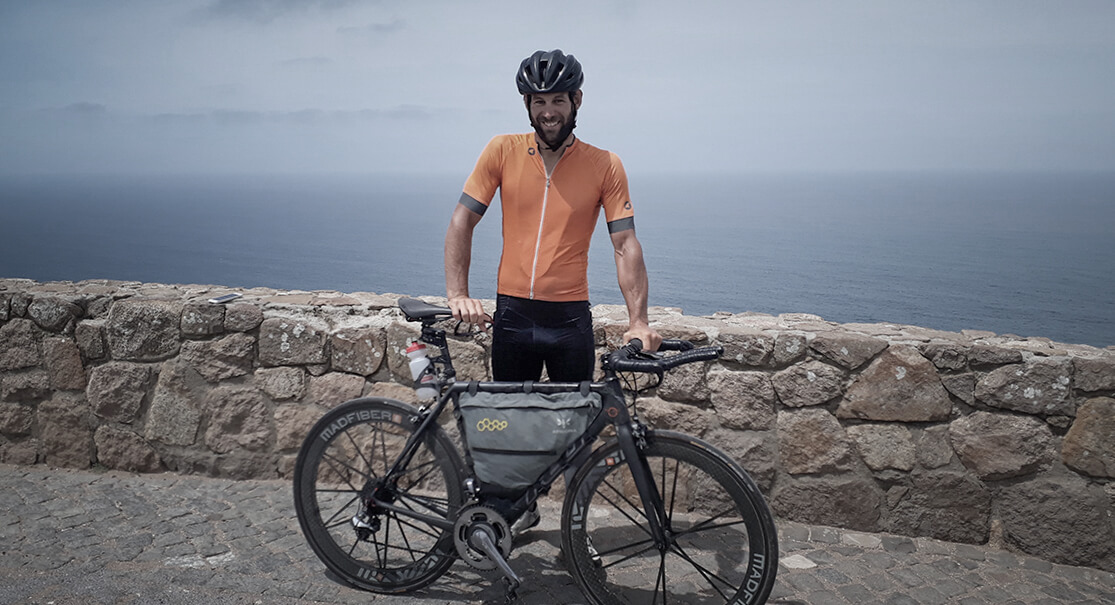 How did the attempt come about?

Somebody told me around Christmas time in 2016 that my record of cycling across Europe had been broken, so I naturally looked it up, but soon realised that it wasn’t my record they had broken. I still had the north-south record, but it was an east-west record that had been broken, in 29 days, and this was news to me.

I started looking into it, to the point at which I actually applied to do it with Guinness, but then I kind of forgot about it as I was supposed to start building a house in April this year and time looked as though it wasn’t going to allow the attempt. However, I was waiting on all sorts of permits to begin building, and when April rolled around and I hadn’t started yet, I thought: “Ok, let’s go and do the bike ride.”

So there wasn’t much preparation involved?

Well I already had the bike, I already had the packs, and I’ve done this kind of thing enough times in the past to ensure that it didn’t feel like anything too out of the ordinary. I did a few things in preparation, like buy a new tent, and plan my route, but it was all a bit last minute.

The official end points for the east-west record are Ufa in Russia and Cabo de Roca in Portugal. I started in Ufa and headed west to Kiev [Ukraine], and although I had planned my route, it went out of the window as soon as I started.

I had planned to stay off highways where possible, but I soon realised that in Russia the only place you want to be riding is on the highway, as the smaller roads are often un-rideable – full of pot-holes, dirt and general madness.That meant that from Ufa to Ukraine I was navigating from my phone, looking at maps, choosing a road that looked alright, going with that, and completely ignoring the pre-set routes that I had uploaded onto my Garmin.

As soon as I hit the end of Ukraine and entered Hungary though I was able to return to the pre-set route, as I wasn’t allowed to ride on the highways any longer, and the smaller roads were much more rideable. From Budapest [Hungary] I went through Croatia and Slovenia, then onto Venice [Italy] and across the top of Italy. I followed the Mediterranean coast all the way to the Pyrenees, then I stayed north of Madrid [Spain] and Lisbon [Portugal] to the finish at Cabo de Roca.

The route I did was about 500 miles more than the quicker, northern, route through Belarus and Poland, but I did the calculations and I thought that I could still break the record on the southern route.

Did you have a schedule for distances and time?

The previous record was 29 days and 20 hours, which was a nice target to aim for as I knew I could do the distance required without having to kill myself.

When I did the TransAm Bike Race I think my average was 190 miles a day or something, so for this one I planned to go for over 200 miles per day. I did a couple of days in the region of 200 miles, but after a few incidents on the road I also ended up doing days in the region of 160 miles, and few around 140 miles. I had been going for a really good time, but my pace slowed due to a bout of food poisoning, and after that I changed my approach. I thought I may as well enjoy myself a bit more; still try to break the record, but take things a bit easier and see some sights too. In the end I did it in 26 days and 4 hours, so still I took a few days off, and had a good time as well.

What was your daily routine?

I only wanted to ride during the daytime, and I was also trying to get 8 hours sleep per night, so I mostly stayed in hotels, apart from a few nights which I spent in the tent.

It was really cold the first few times that I camped, and it so happened that I didn’t have any food or water on those evenings either, which meant that it was taking hours to get going after a night in the tent. Hotels were often quite cheap – I think I paid $3 for one hotel in Russia – so I would try and find a hotel with a restaurant, in which I could eat dinner and breakfast, and sleep comfortably.

I wasn’t carrying much, just one water bottle and barely any food. I would just ride, and then every time I saw a petrol station I would stop, eat and drink something, refill my bottle, and carry on.

I would try and stop for a proper sit-down meal for lunch, and in the evening I found that places didn’t stay open late, so I was trying to finish my days around sunset in order to find a hotel with some food before going to sleep again. That was my routine.

What were the biggest problems you encountered?

Firstly it was the navigation. Even having planned my route, there was a lot of times when I’d approach a road and then see a sign saying ‘No bikes’, so I’d have to pull out my phone and my Garmin and try and find a way around it.

It was pretty boring through Russia and Ukraine too. I was riding on quite major roads, which were just flat and straight for miles, with views of ploughed farm fields on both sides as far as the eye could see. I was trying to take in as much as possible, but there wasn’t really much to take in to be honest.

Navigation and boredom aside, it was the bout of food poisoning in Russia that really got me, which I think was caused by a sandwich I ate at a petrol station. I had run in and out after grabbing some food as usual, but then after a short while my stomach started cramping and I couldn’t get the pedals over.

I thought initially that I just hadn’t eaten enough, so I found a café and had some chips and a coffee, but after two sips I just had to run outside and throw up.

Eventually some locals called me a cab and got me to hospital, but it was like a hospital from the dark ages. All they did was give me tea; No antibiotics, no nothing. They put me in a room alone, and I was shivering so they piled a load of blankets on me, then they just kind of left me. In the morning I still felt rough, but I’d had enough and rode into town to find a supermarket, get some food, and continue on my way.

What bike and packing setup did you choose for the ride?

Aerodynamics is something that often gets overlooked on these kind of endurance rides and races, but it really does matter and so my kit choices were based around that.

I had some superlight, aerodynamic carbon wheels made by Madfiber, and a Felt carbon fibre frame. I chose a Full Frame Pack to carry my tent and sleeping mat because it keeps the weight low down on your bike, improving handling, and it is also much more aerodynamic.

I started with a Top Tube Pack to carry smaller items, but sent this home half way through as I realised I was carrying stuff I wasn’t using.

In search of the time-forgotten valley, Die Hel, in South Africa's Karoo desert