Emma Osentons; Call of the Wild 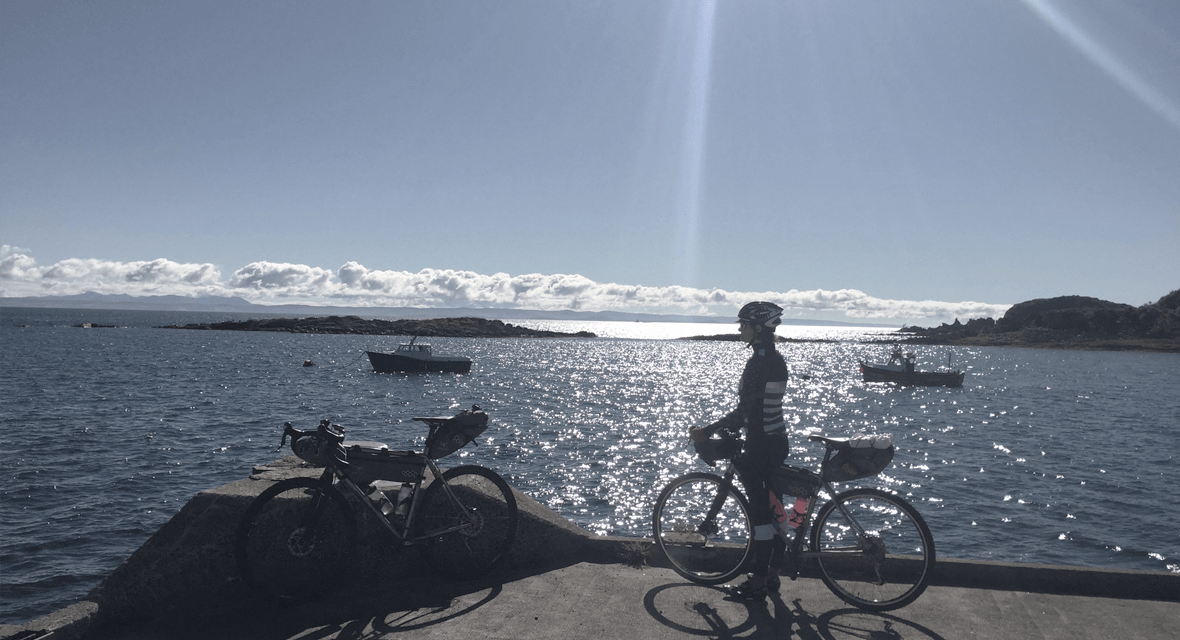 As the weather begins to close in for winter and my creature comfort loving self packs away bags and tents in favour of winter boots and waterproof everything, I begin to look back and wonder how bikepacking has crept upon me in the last year.

There I was, the tent despising roadie, and here I am now planning adventures near and far, avoiding roads in favour of tracks and hike-a-bike.

I blame the Kinesis ATR Tripster, that bike is the most addictive and corrupting influence on my cycling in the last few years, encouraging the crow flying route, no more A-B routes but a whole alphabet of adventure.

I’d raced on the prototype, toured on it lightly, albeit with bulky panniers before it was prized out of my hands in favour of a production model. Then the fun really started. Fatter 40mm tyres were added, lower gears were fitted. The lure of nice tidy frame bags and longer adventures was calling.

I had thought I’d just indulge in a spot of ‘credit card camping’. Why scruff it and rough it with the insects? I’d even figured that I could have a go at ITT’s (Individual Time Trials) without the need for tent, simply carry some emergency kit but make sure I knew where the hotels and B&B’s were.

And that, in a nutshell, is where it all began. I’d entered the Yorkshire Dales 300, planned on stopping about half way in a B&B, which would fit within the rule of self-supported, as long as I didn’t book it in advance. I did, however, decide to check if there was space, only to discover that every B&B in the area was booked up.

Only one solution. A tent.

A hasty purchase on the Friday afternoon from my local camping shop and off I set. Part of my brain wanted to avoid the tent to the point of attempting the whole thing in one. The other part was a little bit curious. After all, I saw plenty of my friends off each weekend in bivy bags and micro tents.

Instantly, I was struck by the companionship of solitude that ITT could bring, I knew the others were out there, it gave me a sense of safety, but also left me the headspace which is often lacking in todays world. Catching up with or being passed by another rider, a few scant words exchanged and then onward, ever onward and into the night.

Having done a few ultra runs through the night in the years before, I’ve always loved the sensation of night falling as you carry on, passing regular folk out for their usual trips to pubs and restaurants as you pass by on another plane. The warmth of lit windows left in valleys far below as the track winds up before you. I finally gave in and pitched the tent around 1.30am. A few hours of restless sleep and off again I travelled.

One thing for sure, I was hooked.

Afterwards, whilst chatting with a friend about the trip, my friend exclaimed “that’s not a tent, I’ll show you a tent that will blow your mind”. He produced a Vaude Power Lizard 1p and 2p for me to have a play with. Eagerly I covered the floor with maps and began plotting, even managing to convince my partner Ali to try. (She’s even less into camping than I).

Then I broke my collarbone. Which is really annoying. To be honest, I was probably really annoying. It’s knackering breaking a bone. In the gaps between sleeping, I plottted and planned. Ali and I had decided on an island hopping trip to Scotland, she’d even said that weather permitting she would do a night in a tent on Jura.

A little of the red flag to a bull for me and immediately plotted a smaller adventure for us to try. I say small, but all adventures are adventures. I bought Ali a set of Apidura packs for her bike and off we went up onto the Yorkshire Moors. Despite an attack of morning midges, and all the fun of trying to sleep with the full moon shouting through the tent all night and me like an upturned beetle with a partially healed bone, we survived and Ali was keen to try more.

There’s something nice about leaving it all behind and crossing the sea to Jura; a sense of freedom mixed with apprehension. Riding like snails with everything you need with you, all stowed away neatly. Leaving animal instinct to decide where to sleep and waking to discover grand views previously hidden by the darkness.

As I look forward to next year, my mind wanders to where it might take me next…

Filmmaker Sandy Plenty talks us through making Romeo X-Ray Nine and what roadies can learn from MTBers.