Everything Is Possible; Bikepacking in Romania

Berlin-based rider Juliane Bötel recently embarked on her first ever bikepacking trip, choosing to explore the mountains of Romania along with her friend, Marion Dziwnik, for a late summer adventure. As we discover in this account, it proved a baptism of fire, filled with challenge and adversity, but for Juliane and Marion, that only made it sweeter. 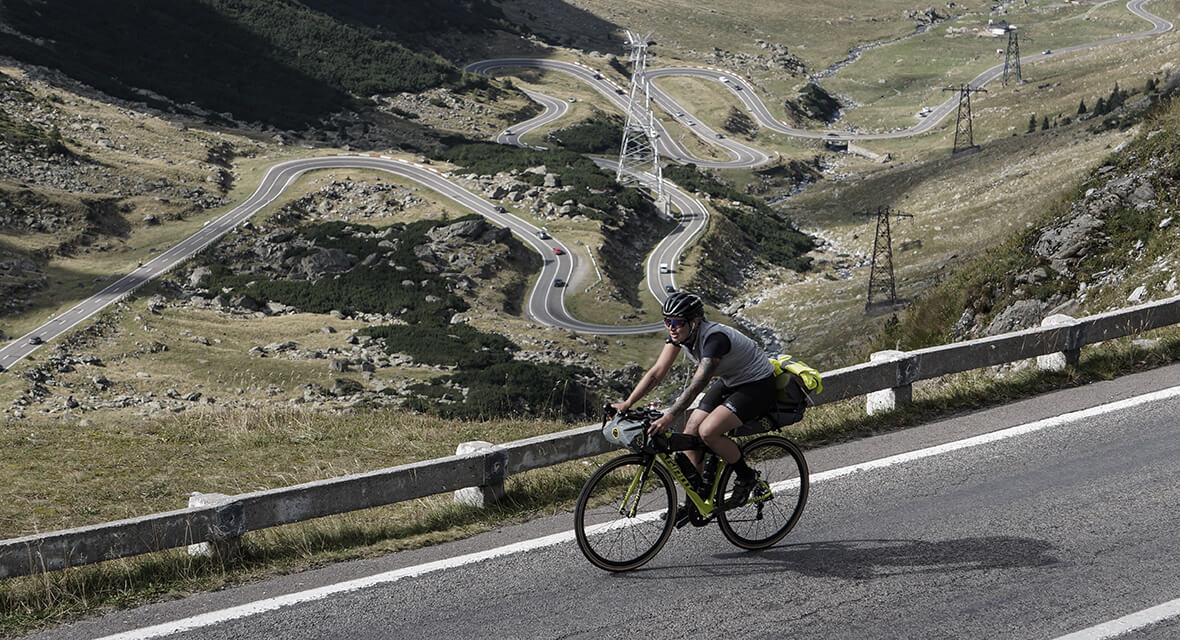 Romania, according to some, is supposed to be that country where all the gypsies and tricksters come from. It’s poor and shabby, with wild bears, wolves, dogs and vampires roaming around in the wilderness. Not a place you’d want to go on holiday, that’s for sure, and certainly not a place you’d want to risk riding around as a foreigner on a bicycle. But, needless to say, they are wrong.

If there’s one thing that cycle touring does well, it’s breaking down stereotypes such as this, and as I discovered on a recent trip to Romania – my first ever bikepacking adventure – it was a pleasure to discover a new country first hand, and quash the misguided apprehensions of others. Forget about the prejudice you’ve heard about Romania. The country, with its breathtaking mountains, unspoiled forests, expansive lakes and idyllic villages, along with a charming, hospitable and open-minded population, makes for a fantastic bikepacking destination.

Like any great adventure, the experiences of my travelling companion, Marion, and myself, were hugely varied, and defined by emotions of a polar disparity; great setbacks and frustrations were neutralised, then eclipsed, by euphoric moments of achievement and beauty, as a whole country passed beneath our wheels.

I started to feel the excitement brewing a few weeks before we left Berlin, our home city. I was looking forward to an adventure with my best friend, and to do something I’d never tried before; to be outside, in the middle of nowhere, far away from civilisation, in the heart of the Romanian wilderness. Just us, our bikes and a tent.

Unfortunately, the trip started with a nightmare though, and despite the proximity to Transylvania, it wasn’t one that involved vampires. On the first day, as we rode from the airport to our accommodation, Marion had a collision with a motorbike. Luckily she got away with just some bruising, but her bike’s derailleur hanger was snapped clean off. It is a component that differs in size and shape between almost every bike, meaning that only an exact replica will do as a replacement, but waiting for one would have taken time that we didn’t have. Initially, it felt as if the adventure was over before it had even begun, but we were lucky to find a bike shop that – after hours and hours of work – was able to carve and polish a similar hanger until it fit, enabling us to begin the adventure proper just the following day.

As we made our way south to the Transfagarasan, Romania’s most fabled road, the hardships continued. Marion’s bodged bike unfortunately broke again, and upon reaching the Carpathian mountains – over which the Transfagarasan snakes – we were met with a fierce weather front that also forced us back another day. As we’d lost some time we decided to tackle what we’d planned for two days in one, and I was nervous as hell. I used to underestimate myself, and would always tend to be a bit scared when things began to look difficult. But I’ve learned that when I do put myself out there and attempt to do these things, when I’m right in the middle of it, I can activate a power within.

That’s how it went on this occasion, too. The people we met in the days before had told us the Transfagarasan would be too long and too steep for us to cycle up. They said that what we wanted to do was crazy, but we were bent on doing it. I was nervous on the approach, and as we cycled I felt the tension draw my stomach tight. It took around 50 km to get to the bottom of the mountain from the nearby town of Sibiu, and while I was distinctly nervous at the prospect of what lay ahead, I also felt good.

As the road pitched gradually up between the trees, all of a sudden the tension began to dissipate. My legs didn’t feel heavy any more. My thoughts didn’t turn negative. I didn’t get tired. In fact, what I experienced was the complete opposite. It felt like I was rolling up the mountain and couldn’t stop.

Both Marion and I had broken our shoulders just a few months before we were due to leave on the trip, and they were injuries that could have severely compromised our ability to undertake adventures like the one we were on now. Yet here we were, after overcoming not just those setbacks, but the broken bikes and severe weather that Romania had thrown at us, approaching the highest point of a 700km bike tour. I began laughing out loud and cried tears of joy as I pedalled.

It was one of the most beautiful moments, either on or off the bike, I’ve ever experienced, and the climax of a day I will never forget. I still remember, when we got to those lofty altitudes, as the forest got thinner, and the trees opened up their branches to reveal the stunning view of the Transfagarasan – the one we knew from the pictures. It was just breathtaking. We reached the peak, gave each other a big hug and looked back down to the valley below. I will never forget that view. I felt so unbeatable and strong at that moment.

Before the trip had begun, in the days and weeks leading up to it, I had this strong feeling of excitement inside me, which in turn I think gave me a lot of energy, and – once the adventure began to develop – turned into something beautiful; a rare mixture of satisfaction and happiness. When I think about bikepacking with Marion in Romania, for me it feels as if we accomplished something quite profound. It wasn’t easy – in fact, it was a huge challenge, especially considering all the trouble we had – but we solved every problem that was presented to us in the best way we could.

We had a Plan A, and Plan A would have been amazing had it worked out – but it didn’t, and we didn’t have a Plan B. We just had trust in each other, in the people we met, and in our improvised solutions to the problems that beset us. With a true friend as a companion, and the love, understanding and trust you give each other on tour, everything is possible – especially when you’re on your bike.

A Hidden World and a Retractable Dog Leash

Scotti Lechuga tells us about setting the fastest known time on the Arkansas High Country Race route with her partner Ernie.

Warm Showers and the Cycling Community

Warm Showers is a free hospitality exchange for the cycling community. Here, we learn more about the resource, and how to use it.