On the Nihonbashi Bridge in Tokyo, September 17th, The Japanese Odyssey began for it’s second year. A 2,400km non-competitive, high-camaraderie voyage, navigating much of Japan’s mesmerising mountains. We caught up with of the event organisers Guillaume Schaeffer on riding in the land of the rising sun a second time. 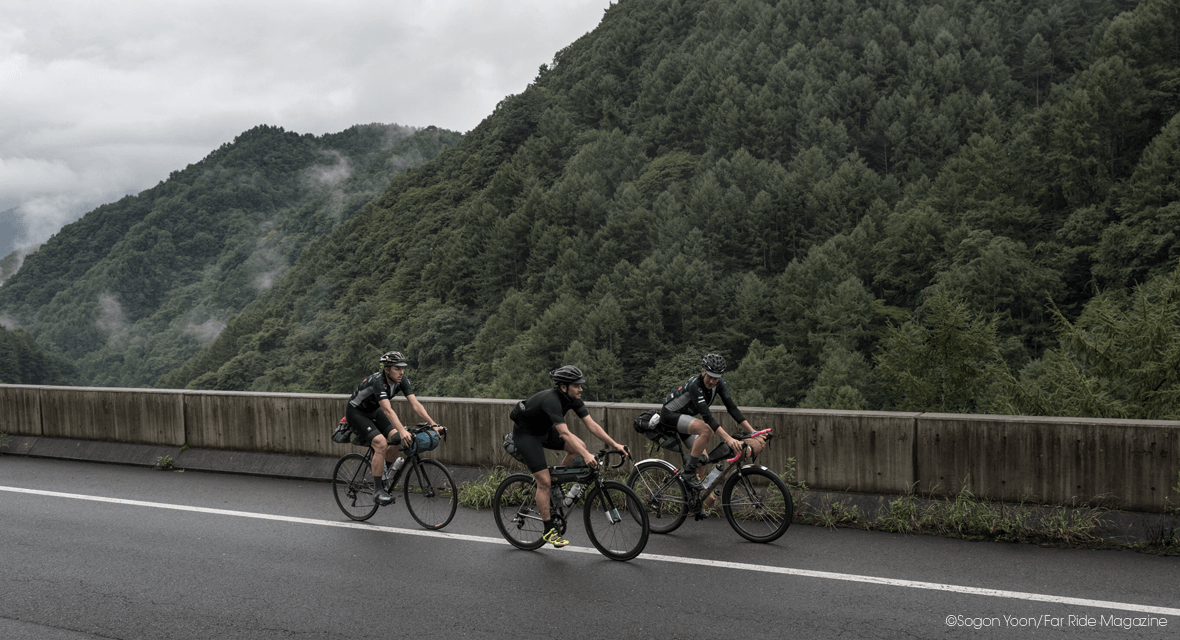 How long have you been cycling for?

Bicycles were always around during my childhood. It was the fastest and easiest way to get around, and an open door to “adventures” in the fields and trails around my hometown (usually involving mud and bruised knees – lots of great memories!). Then, later on, life got in the way. Studies. First job. And I somehow lost touch with the bicycle.

In spring 2009, I went to Amsterdam for a few days. Seeing the bicycle used as the primary mode of transport made me realised how much I missed cycling. When I got home, I started commuting by bike, around 30 km per day. It seemed a huge distance at that time.

Over time, I got on the bike more and more often. Then things went to another level entirely when I started working as a bike messenger three years ago.

What other long distance rides have you done?

I actually never rode long distances before the first Japanese Odyssey in 2015! I did a 200km brevet and a 230km sportive earlier that year, but the majority of my “big” rides were around 120-150km.

How did you get involved in the Japanese Odyssey?

Emmanuel (the founder of the Japanese Odyssey, and the boss at our courier company) got in touch with me. One evening, he talked to me about this idea of a long-distance event in Japan. He needed help to set a website up and to make a visual. That’s how I got involved. I remembered telling him how great the project was. Great but a bit crazy.

And I insisted that this kind of riding wasn’t for me. However, his enthusiasm for the project was so contagious, I later found myself hacking together a bike to take part in the adventure.

Were there any interesting places you ended up sleeping along the way?

I’m not picky, really. Anything with a flat floor and a roof is okay. I spent most of my nights in Shinto temples yards, public toilets, bus stops. One evening, I got caught in a storm and took shelter in a half-collapsed barn. I was genuinely worried that the roof would fall on me during the night!

What was the hardest thing about the event?

The route was supposed to be the hardest thing, with a lot of climbing involved. But what made things really hard this year was, in fact, the weather. Japan was hit by two typhoons during the Odyssey, so we had an awful lot of rain. Spend ten to twelve hours under the rain, and then sleep in a wet and cold sleeping bag – repeat this several days in a row – and you’ll quickly feel miserable. With the heavy rain and wind, descents also became very sketchy… To a point that there has been a few time where I descended nearly as slow as I climbed!

What was your favourite part?

The fifth day was a great one. After several days of rain, the weather started to improve, and we even got glimpse of sun rays. I felt in good shape climbing Mount Ontake. The scenery was amazing, and the descent quite enjoyable. And we kept on crossing paths with other riders, exchanging experiences.

Any recommendations for riding long distance?

Know your limits. Then see what happens when you don’t take them into account – you’d be positively surprised.

I feel that you don’t need to be a super athlete to do long distance riding. Being resilient is as important as being strong or fast. Patience and mental strength go a long way. And, as for more down-to-earth advice: pack light. You’ll often realise afterwards that you carried a lot of unnecessary stuff. And while titanium bolts and weight-weenie stuff won’t make any difference except emptying your wallet, 3kg less luggage will actually help. Also, the less you pack, the less you have to worry about.

I definitely got hooked in the long distance riding thing. I don’t have much planned for the moment, but I have been eyeing the Transatlantic Way… In the meantime, I would love to do some micro-touring or S24O, whatever it is called these days. And while I’m primarily a road rider, I get more and more attracted by trails. I need to expand my horizons, I guess.

As for the Japanese Odyssey, I feel like it’s getting momentum. Our partners Pelago Bicycles, Champion System, Papersky, and Far Ride Magazine helped us a lot in that regard. We had 21 riders this year (including Emmanuel and I), and we hope to attract more next year. And, while it may be a bit early to freely talk about it, I know Emmanuel has big plans for the third edition.

Are Gravel Bikes a Marketing Ploy?

Read on to find out why our Creative Content Lead, Chris, thinks gravel bikes might just make the best bikepacking bikes.

Bikepack Canada founder Ryan Correy, chats about how and why he set up this annual coming-together of North American bikepackers.