Introducing the Race Around Rwanda

Cycling is the second biggest sport in Rwanda, after football, and bicycles are one of the main forms of transportation in the country – for everything from people to chickens, to beds. For Simon De Schutter and Matt Brokenshire, it was an obvious place to launch an ultra-distance cycling race.

Initiatives to further cycling as a sport in Rwanda originally focused on Mountain Biking, with Tom Ritchey’s Project Rwanda. With access to better equipment and training, Rwandan riders participated in the Cape Epic and even the Olympic Mountain Bike Race at the 2012 Olympics in London. However, in recent years, the focus has shifted almost completely to road cycling – with a highlight being Joseph Areruya’s involvement in Paris Roubaix in 2019. The Tour du Rwanda also now has UCI 2.1 status and attracts world tour teams; Astana last year and Israel Start-Up Nation this year.

Today, the Africa Rising Cycling Center is the beating heart of Team Rwanda, attracting Africans from all over the continent and providing high-quality training. The Center aims to enhance and grow the amazing talent in Team Rwanda, Team Ethiopia and Team Eritrea and unify African countries through the sport of cycling. Each country will still have their national team, but this conglomerate will serve as the beginning of the formation of a continental professional team with sights on an eventual Tour de France bid.

But the bicycle is so much more than just sport in Rwanda. Most bikes are steel single-speed Chinese or Indian bikes. Ridden mostly by boys and young men, they are simply a means of transporting people and goods from A to B, and sometimes for commuting. Essentially, most things done by car in Europe, or by motorbike in the surrounding countries, they do by bike in Rwanda. This is out of necessity – cars and motorbikes are simply too expensive for most Rwandans.

As a result, Rwandans are used to riding bikes while carrying a lot of stuff (even up the many hills the country has) and Race Around Rwanda competitors should expect to be ‘raced’ up mountains by locals at every village! Despite the Rwandan love for cycling as transport and sport, the concept of bikepacking is very new to most Rwandans. One of the local riders taking part, Innocent, told Simon and Matt he would “see if I can install panniers on the bike, because I don’t want to carry a backpack for the full race”.

Simon and Matt faced similar challenges explaining the race to the local government and sponsors, who struggled with the concept. More often than not, they would ask “OK, so when and where does stage two start? At what time will they finish?” Before the Race Around Rwanda, the longest cycling stage in the country’s history was the 213km stage of the 2020 Tour du Rwanda. 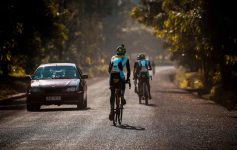 While the race is a fantastic opportunity to profile the vibrant Rwandan cycling culture to the world, it is also an opportunity to introduce the local riders to bikepacking. It was important to Simon and Matt to involve local racers in the event and to provide them with high-quality equipment and support to enable them to be competitive.

At Apidura, our approach to sponsorship always focuses on supporting the community, rather than burdening event organisers with targets in return for investment. Providing packs for the local riders to use was an easy decision.

As Simon says, “this is truly the first very long-distance experience for any Rwandan cyclist, and now with their bikes and packs sorted out, to be honest, the biggest challenge is navigation’.

Created by two Spanish brothers, ‘The Wineland Adventure’ is a short film about a solo e-bike voyage through La Rioja