Following her win of the Silk Road Mountain Race in 2020 (known as one of the most challenging mountain bike races in the world), Jenny Tough confronts her relationship with her body.

Kegety Pass looms as the final extreme hurdle of the Silk Road Mountain Race. After nine days of racing in the wild backcountry of Kyrgyzstan, nailing this brutal climb will almost – almost – feel like I’m home free to the finish line.

Making my way up the final rideable segment before the hike-a-bike, heavy rain turns to snow, and the sky lights up with lightning and booming thunder. Heavy wet snow pelts down and I hurry to pull on every layer of clothing I’m carrying. It’s impossible to stay warm, so I don’t stop for longer than necessary.

The south side of the pass, where we ascend, had suffered a rockslide recently, and the trail that I had pedalled down two years ago in the first SRMR was mostly wiped out, leaving a mess of scree to clamber up.

The snow intensifies as I dismount and begin the push that I know will take me most of the morning. I lose feeling in my fingers and decide to use the single set of emergency hand warmers I had brought for the race. It is the last segment at such a high altitude, so I take the gamble and stuff them into my doubled-up gloves. The effect is instant, and dexterity returns so I can lift my bike and begin the intensely steep hike.

My loaded bike weighs in at around 25kg, and with nine days of exhaustion in my body and brain, it takes a moment to squat under the top tube and hoist the bike with perfect balance across my back. Standing still, I’m already sliding backwards in the loose and wet scree, now with a slippery dusting of snow lying on top. I have to keep moving.

The storm shuts out any outside noise and I am alone on this climb. At this point in the race, few are left on the course, and I know the only other riders in my vicinity have already reached the top and are most likely freewheeling down the long descent to Northern Kyrgyzstan.

All the riders ahead of me are men, and although our bodies differ significantly, all of our bikes weigh nearly the same. My bike weight is just over one third of my body weight, and I’ve learned that carrying it on my shoulders is more efficient than trying to push with my arms. I let myself ruminate on the physical advantage that many of the men have on hike-a-bikes for a brief moment, but there’s no point dwelling – in ultra racing, all competitors come with their own unique set of advantages and disadvantages, and I need to focus on what I can do well.

I push into my legs and hammer up the pass, the extra weight screaming through my muscles as I fight to find stable footing. Rocks slide down the steep slope the instant I put my weight on them, so there’s no way to stop, and nowhere safe to put my bike down and take a break. I have to keep moving.

With the weight of my bike going through my core and legs, I feel strong and stable. I spent my winter going to the gym and lifting heavy weights, and now I can finally see the benefit of this work. I’ve never felt stronger – charging up a steep mountain in the middle of a snowstorm with 25kg on my back, and once I reach the top, I know that reaching the finish line is now more than possible, and taking the title of first woman nearly sealed.

I finally let my bike off my shoulders at the top and lie it down in the snow to take some pictures. The storm has passed, and the view is stunning. I feel amazing. 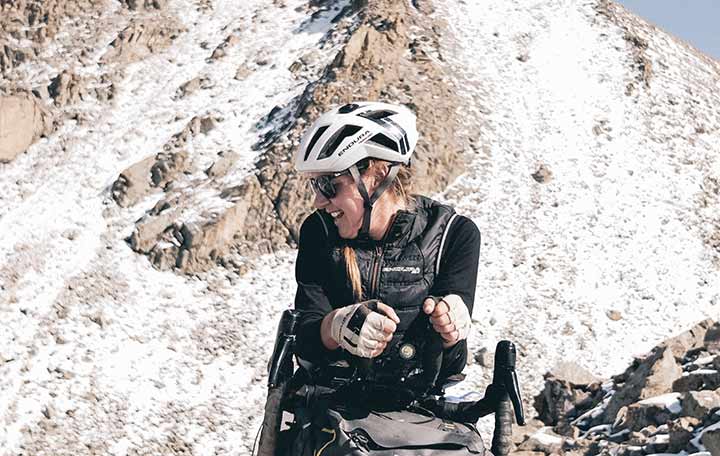 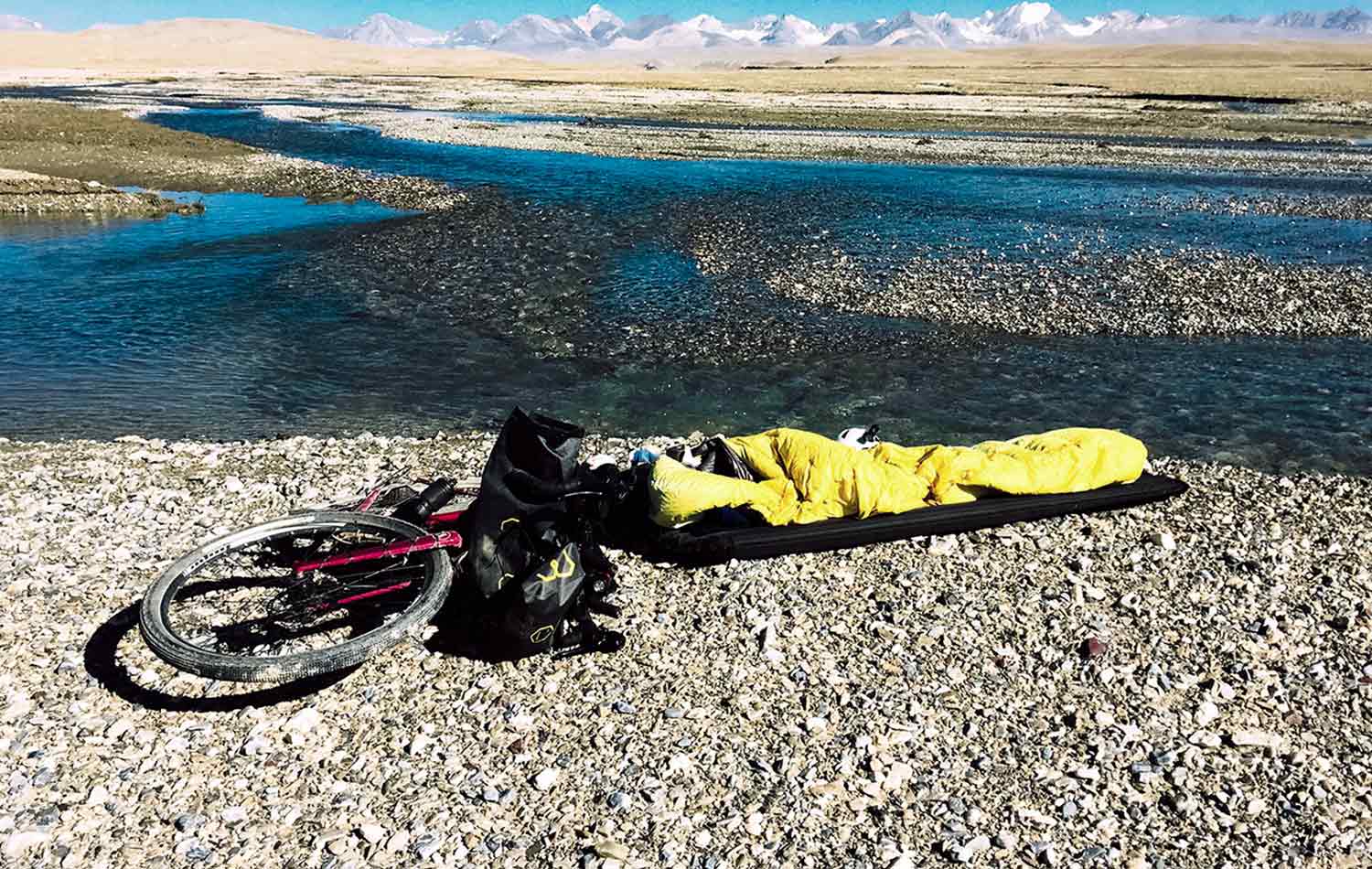 I clip in and begin the long descent, every few hundred metres of elevation drop stopping briefly to discard more layers, until I hit the valley floor in just shorts and t-shirt again, where I meet the group of male riders I’ve been leapfrogging taking a break at a magasin. They tell me they’re impressed with my ability to scale that difficult pass, and I reluctantly accept the compliment.

I check the dots on my phone to confirm that I am still where I thought I would be in the competition and notice the media car is on its way to where we are. As the first female in the final stage of the race, I know they’re coming to film me. Suddenly, my positive attitude shifts.

In the mountains, whether pushing up a gruelling hill or playfully rolling down the other side, I forget about my body and my relationship with it. It is a machine, one that I have built through hard work and training. When the machine does what I trained it for, I am grateful for it. We get along.

But outside of the mountains, our relationship turns dark. It is no longer about what my body can do, it is now what it looks like. And, since the age of about 14, I haven’t ever liked what it looks like. Demons that I have lived rent-free in my mind for more than half of my life come flooding back in as I scan my reflection in a shop window and wonder if I can ride fast enough not to meet up with the film crew. What only hours previously was a body I felt so good inside, now I only see the flaws, the bits that are too big or too small. Nothing in the right proportions and nothing being flattered by lycra.

I start cycling and the demons are quieter. The course is on tarmac for a while, and I can cover some good ground, edging me closer to the finish line. The film crew catches up and drives alongside me for a while. I’ve hardly eaten all day, due to the lack of supply options in the backcountry, and eight days into a race I am on a losing battle with keeping enough energy stores, so when a shop with ice cream appears, I accelerate towards it. Two cameramen follow me in, and although I know I need to fill up on calories, I get self-conscious and leave with only one small ice cream and a cold bottle of juice – hardly enough to hit the sides at this point.

I sit out in the sun and as I unwrap my ice cream, I look up to see the two lenses pointed directly at me and realise there will now be footage and stills of me stuffing my face with ice cream. The demons shriek fear throughout my mind. My toxic imagination predicts harsh internet comments and remind me that, despite being hours from finishing one of the hardest ultras in the world, I am no athlete. Because I don’t look like one. 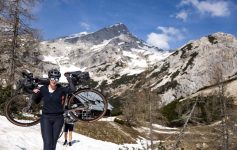 The demons shriek fear throughout my mind. My toxic imagination predicts harsh internet comments and remind me that, despite being hours from finishing one of the hardest ultras in the world, I am no athlete. Because I don’t look like one.

After 11 days of racing and surviving, I cross the finish line as the first woman in the SRMR for the second time. I made considerable improvements on my previous race, which was my main goal in the event. To say I was elated is an understatement – I had worked hard both in improving my strength for the hard hikes as well as my technical riding skills since the last time I raced in Kyrgyzstan, and my work had paid off.

But that moment was tragically fleeting. Looking at myself in the mirror after having the best (and most needed) shower of my life at the finish line hotel, I saw my deflated body that had been through a brutal 11-day ride along with two bouts of food poisoning, and the toxic idea of maintaining the (false) weight loss screams to the forefront. If I diet now, I’ll stay thin. Of course, anyone who has done an ultra knows that the bone-protruding figures at the finish line only last a few days before you regain hydration, but I couldn’t help clinging to the fantasy.

It was six months after flying home from Bishkek with my winner’s hat that I hit what I’ll call my Rock Bottom. A combination of exercise dependency and calorie restriction finally caught up with me while attempting to ride across the Colombian Andes, and for weeks I could hardly walk up a staircase. The muscles I had built to cross the Tien Shan the previous summer just wouldn’t come back, despite putting more time into the gym than ever before. I had gone off birth control in an attempt to regulate my period, but it remained absent, as it has for most of my adult life. I was physically weak and emotionally distressed. I finally picked up the phone and did what I had needed to do for many years – I spoke to a doctor. 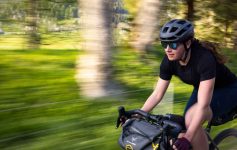 I was diagnosed with RED-S and told in no uncertain terms that I had an eating disorder. I had never intended to have an eating disorder, and having the label slapped on me just like that shook my core and my self-esteem. Of course, I knew it was true. I had been restricting calories since I was a teenager, and when it didn’t work, I restricted further. Piling that on top of overtraining and multiple ultras each year had created a storm of physical symptoms that I’ll be working with a doctor to heal for a potentially long time still to come.

The pressures put on everyone – not just women and girls anymore – to look a certain way in order to have value and respect in our society are unrealistic. I think most of us know this, yet the pressure is internalised from such a young age that it can be too hard to fight. I threw myself into sport a long time ago, and while those moments in the big mountain wildernesses give me an immense peace, the sporting industry continues to be a toxic environment for most body shapes. I still find it hard to own the fact that I have won some of the major bikepacking races, largely because I don’t have the body type that a cyclist is supposed to have.

Bodies in sport should be celebrated for what they do. Appearance should be inconsequential. Sporting media has a lot to answer for in the limited range of humans it portrays, but I believe we can fight this. The way we talk about ourselves, the way we talk to each other, and the reasons we ride all have immense power. If you ride, you’re a cyclist. You belong here. I don’t care what the tag on your bib shorts says. That’s not how you qualify an athlete.

I’ve never judged anyone for donning lycra at any size, and I’m trying to learn how to not judge myself, either.

The Anatomy of a Scratch