Kajsa Tylen; A Year in the Saddle – Part 2 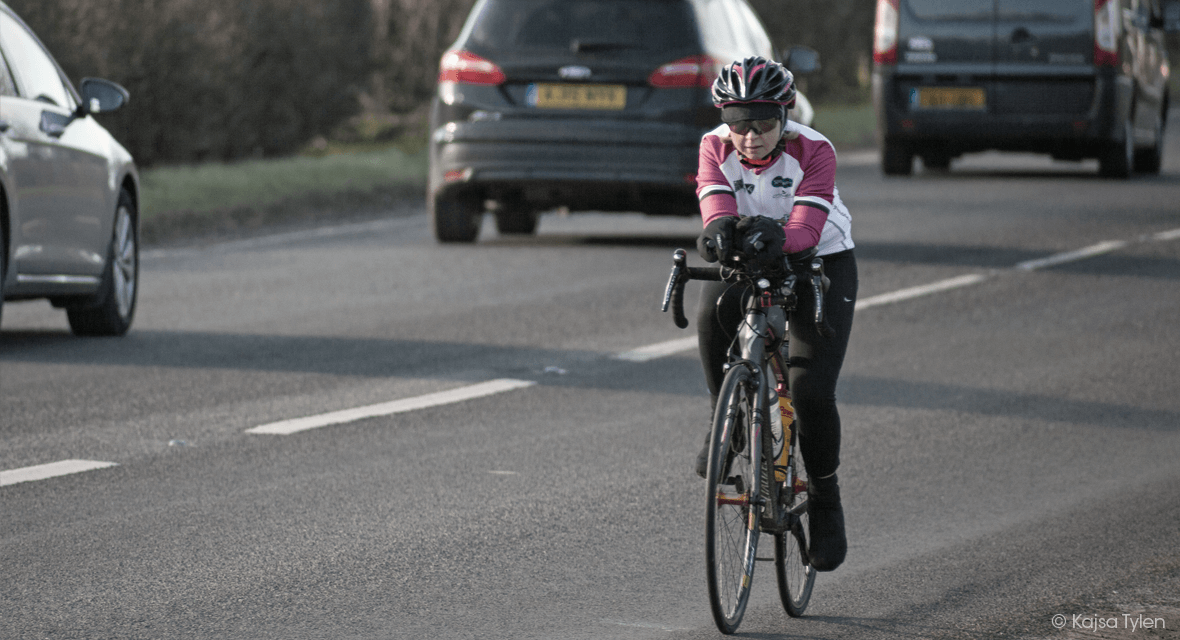 “I was sick, so it was not really a rest day. Still there were some days I rode as little as 20km, and my longest day was 300km when I did the Vätternrundan in Sweden.”

This incredible feat makes Kajsa the official female world record holder for the ‘Farthest Distance Cycled in a Year’, verified by Guinness World Records. She beat the precedent record set in 1938 by Billie Dovey who rode 47,641 kilometres. The record has few rules. Some are obvious: you’re not allowed to draft; you can ride with people, but not behind people. Some are more bizarre:

“I also had to ride the same bike the whole time. If it broke down and I had to go somewhere to get it repaired, I had to come back and start riding from where I stopped.”

Who is Kajsa Tylen? When I ask her, she replies: “I don’t know… just a regular me?” Kajsa is down to earth and has no ego. She’s not your usual ultra-endurance athlete. She is not even what we would call a “hardcore” cyclist.

“I’ve not been cycling for long. I started triathlon 4 years ago. Actually, I wasn’t really into exercising until I started kickboxing when I was 26” she says. She’s now 40.

That made Kajsa’s attempt even more challenging.

“Initially, I was trying to achieve 100 miles per day but I quickly realised that this was not going to happen. I changed that to be between 90 and 95. Then I had so many problems with my legs and saddle issues that I decided that I was going to go for the record and just (sic) hit the 50,000 rather than setting myself goals that would get me frustrated.”

What was wrong with her legs?

“I think the muscles in my thighs were inflamed. If I’d stop on a slight incline and would get going again, the added effort would make my legs cramp up. I had that the whole year. It messes with your mind when you have that”. She continues: “But then I got to September, I saw the finish line, got a new saddle and just sprinted for the finish really.” That must have been a long sprint.

But Kajsa’s year on the bike was not only misery. There were also great moments. Between May 18 and July 24, she rode through France, Belgium, Holland, Germany, Denmark, Sweden and back via Finland, Sweden, Denmark, Germany and France. To challenge a distance record, normally you would choose an area with the best terrain and weather conditions and ride on the same roads day in, day out. Not Kajsa.

“I would have blown my brains out if I had had to ride in the same place all time… Honestly, I can’t imagine anything worse. For me it was always supposed to be an adventure, something I could talk about, I would have memories of. I wanted to make it interesting. I could probably have done more miles if I had stuck to the same route all the time but I’m not sure I would have had something interesting to say afterwards. I had a year off ahead of me so I wanted to make the best of it.”

During this trip across Europe, Kajsa travelled with her mum who would tow a caravan, go ahead, set up camp and get the food ready. But Kajsa’s days would be unsupported: she would carry her food, extra clothing, tools and repair kit. Was her mum her team manager? “No, I was” she replies. “My mum was the team!”

What were the highlights of her European adventure?

“In some ways it was the north of Sweden (my birth country); I’d never seen the midnight sun before and that was pretty cool. Sweden is a gorgeous country, it’s so quiet. One day I cycled for two hours and saw 8 cars, which is unheard of in any other country that I’ve been to. And it was interesting to see how much bigger the mosquitoes are in the north! Riding along the Rhine in the summer was also spectacular. It was very hot and on one day I found a stream flowing into the Rhine. I immersed my legs and watched dragonflies flying around… there was even a crayfish. It is those moments you remember.”

Then there’s the inevitable question: why? Why on earth did you inflict this to yourself?

“It was for the challenge initially. Me and my brother used to look at the Guinness Book of Records when we were kids, trying to think of something we would do. And then you forget about it. Later I read about the record that Billie Fleming did and I just thought that it was doable. I could not have done it right there and then but I thought if I trained and planned for it there’s no reason why I could not at least try. That’s one of those things where you plant a seed in your head and you can’t get it out, so I just had to do it.”

That’s what she did. But during her challenge, another motivation came up.

“I tried to find some charity that would help inspire normal people to get active, but I didn’t find any. So, on one ride I decided that I would ask people to donate sweat instead of money; that’s how the Sweat Pledge came about. It’s been really motivating to know that people were doing things because of me, and were getting up every day because I was getting up every day.”

The journey is more important than the destination. Beyond the record itself, what did Kajsa get out of a year in the saddle? A lot.

“I have learnt to accept others more. There’s so many people I’ve ridden with who have been amazing; in another life, we would never have met or spoken to each other because we are just so different. That has made me look at myself and think I need to be a different person in some respects. I’ve learnt a lot about cycling… I’ve done it for nearly 2,800 hours. Pacing, how to climb when your legs are tired… I’ve become very good at not letting my legs cramp up! And I’ve relearnt how much I love animals. I’ve saved frogs from the road, baby birds… one day I rescued a horse in a field who had his rug over his head. I’ve also made some lifestyle changes. I’m only eating food now from free ranging animals. You hardly see any chickens or turkeys when you ride. They are all locked away somewhere in barns and it breaks my heart when I see these things.”

“I have something in mind but I need to recover first… My knees are not happy. Anyway, I’m launching www.sweatpledge.com… and of course work gets in the way of all that.”

Enjoy the recovery, Kajsa. We’re looking forward to following your next adventure.