Laurence McJannet; Rising Out Of The Shropshire Plains

Laurence McJannet, author of ‘Bikepacking’, guides us through a bikepacking trip to the Shropshire Plains. 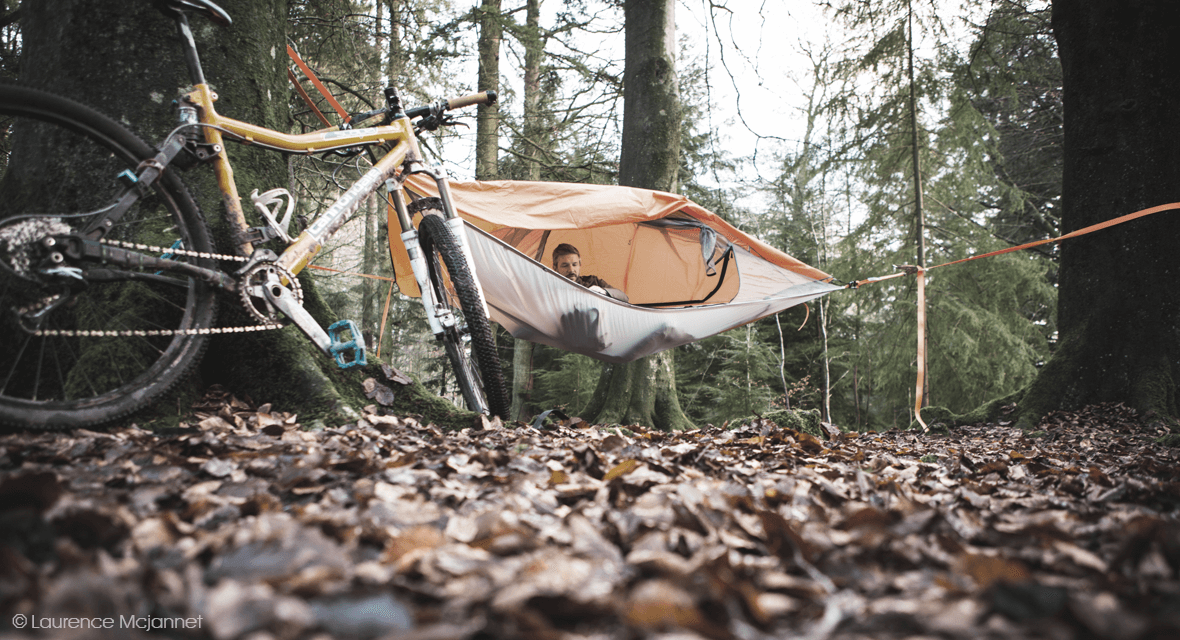 As a Shropshire lad, I’ve always had a soft spot for the Long Mynd’s ‘windy wealds’ and ‘valley guarded granges’ that inspired the poetry of A E Housman. Rising out of the Shropshire Plains, Wenlock Edge and the Mynd tower over the market town of Church Stretton, where my train rolls in after many years away, eagerly anticipating reacquainting myself with the network of trails that skirt close to the Welsh border. Steep banks (locally known as ‘batches’) radiate from the Long Mynd’s moor tops, some 500m up, and technical trails spill down the valleys on all sides.

Each time I arrive at the station here I’m reminded of the town’s well-earned epithet – that of ‘Little Switzerland’. Set amidst the silent sentinels of the Shropshire Hills, it is almost defined by them, this quaint little town that lies on one of Europe’s largest natural faults.

Over the years I must have ridden most of the miles of natural trails here, but my long overdue return heralds a different experience – my first wild camp amid these hills that were once my home. Lugging my laden bike off the train, I spin out on familiar roads, albeit briefly; the hills loom so closely over Church Stretton, you can be on their lower slopes within minutes of alighting from the train.

It’s for this reason I chose to return to the Long Mynd – its proximity to the station and the wealth of hilly, technical trails are the perfect recipe for a bikepacking microadventure. You can tailor your loop to match your fitness or energy levels, though it’s nigh on impossible to ride in these parts without at least one lung-busting climb or tooth-loosening descent. Rest assured you’ll be rewarded for those efforts though – it doesn’t take long on the Mynd before you shake off the day trippers and have the hills to yourself, such is the remote, solitary feeling these high gorse-scattered hills create. I choose the easy fire road climb to the south and before long am deep in the heart of the Mynd, rediscovering the paths near Minton and Yaspel Bank. I revel in my reunion with them, even unfazed by a burst tyre wall and ripped inner tube after attacking one particular descent with gusto. For once I’ve come prepared with a spare foldable tyre and plenty of tubes (though in the past I have improvised with cut-up milk cartons and folded five pound notes).

There is plenty of cover on all but the highest reaches of the hills, though the trees tend to be scattered in small copses between swathes of heather and occasional rocky outcrops. The trail pitches and yaws as I make my way north along the rolling Jack Mytton Way. As the skies clear and the light fades I decide to find the remotest place I know up here to make camp – the aptly named Wild Moor. As I ride past the viewpoint at Pole Bank, some 516m up, I realise I haven’t seen a soul in a couple of hours, and with the Marches Way now leading me out onto the purple heath of Wild Moor at dusk, I’m unlikely to now. At last, with the setting sun casting an eerie glow over the mythical Stiperstones to the west (legend has it the quartzite ridge is the seat of the Devil himself), I hunker down beneath a small cairn which shelters me from the stiff evening breeze and begin to rustle up a refuelling pasta supper on my stove. My legs feel the pleasant ache of an afternoon’s climbing. Time seems to unravel up here; I must have ridden 40km in something of a beatific daze, only realising my efforts when a sinking sun shook me from my reverie.

Out here now, as the first stars begin to blink in a sky unfettered by light pollution, I can think of nowhere I’d rather be. The simple pleasures of an exhilarating ride, a wild bivvy camp, the slowly disappearing view of a wonderfully wild landscape, a nip of whisky and fond reminiscences – these are the things that help recalibrate the senses once in a while and allow you to take stock of things. And as the rising sun wakes me tomorrow I’ll set off again, unburdened by agendas or timetables. If I’ve slept well and feel restored I might head west, to Hope Bowdler, Willstone and the Lawley hills, in search of an epic ride; I could linger a while and soak up the landscape from my 500m vantage point before dropping down the Devil’s Mouth or Carding Mill, passing the crowds that will have begun encroaching the Mynd’s lower slopes. Or I might continue along the Marches Way, to see if I remember riding along the Batch as a kid, before seeing what the old pub at All Stretton is like now and leisurely returning to the station.

But for now, I stretch out my weary legs, pull my hat down against the chill night air and savour the last glimpse of the Welsh hills to the west before all that’s left is a vivid canvas of stars and a thin sliver of moon.

For more stories like this, check out Bikepacking: Mountain Bike Camping Adventures on the Wild Trails of Britain by Laurence McJannet (£16.99, Wild Things Publishing). Available from all good bookshops.

Scotti Lechuga takes us on a bikerafting adventure on the Buffalo River.