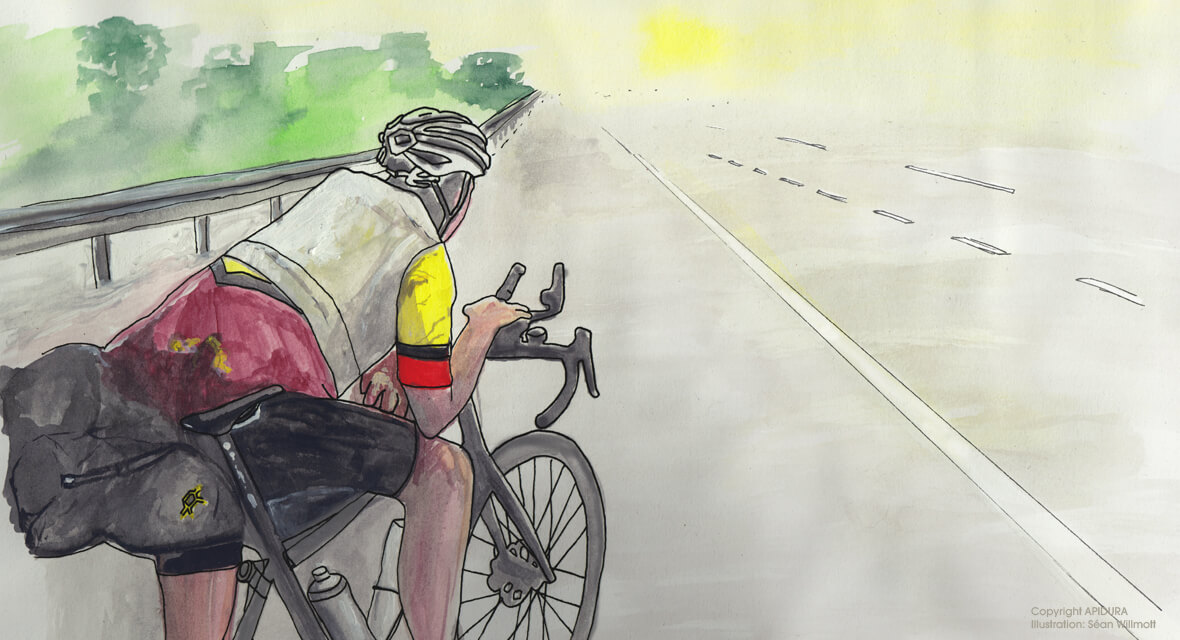 In July 2015, Gareth Baines took part in the third edition of the Transcontinental Bike Race, racing from Flanders to Istanbul in a single stage. During the race, riders were required to pass through four checkpoints before the checkered flag at Istanbul; how they got through was a matter of rider strategy. Here, Gareth recounts his unconventional journey to Istanbul.

Have you competed in any other ultra long distance cycling events before?

I’m relatively new to long distance cycling; I’ve club cycled for about 10 years, the Sunday ‘bun run’ became a bit short, so I started to extend it regularly to 100 miles and eventually camping trips on free weekends.

I had been following Mike Hall’s racing and Transcontinental 2013 caught my eye but, at the time, I didn’t feel experienced enough in self-sufficiency. I talked with my club mate Graham Gordon who is a seasoned audaxer, especially the longer x-rated events, he recommended a series of local events which would get me my Super Randonneur for the season and develop my skills in multi day self-sufficient cycling. It turned out to be my gateway drug! I lapped up the 2,3,4, and 600 events, and having committed to TCR 2014 I continued on to do the ‘Mille Cymru’ (1000km 16’000m Wales, UK). I entered TCR 2014 with two goals, to finish before the finishers’ party and gain enough experience to race the following year. I rolled in at 43rdposition with a few days to spare.

This year I rode 1300km solo unsupported around ‘The Highlands, Glens & Western Isles’ audax route over Easter, I was able to test all my new Apidura luggage and test my fitness. The weather and terrain turned it into the toughest ride I’ve done to date, great prep.

When did you decide you were going to enter TCR 2015 and why?

Somewhere between Albania and Istanbul during TCR 2014. The experience had been all that I had imagined, I knew I was capable of racing the event properly and felt a top-10 position wouldn’t be beyond me if everything fell in to place.

What made you decide to hit the checkpoints in a different sequence to the pack?

Maths! I plotted both routes, the advertised 1, 2, 3, 4 came out at 4400km, but there was a subtle rule that allowed for the use of the Ankona-Split ferry and that the checkpoints didn’t have to be visited in sequence. 1, 2, 4, 3 came in at 4000km, I was familiar with the ferry terminal and the coastal road through Croatia on to checkpoint 3 in Montenegro having ridden the same route last year. I figured the familiarity would serve as a mental boost midway through the ride.

How did this affect your race?

Unfortunately, it all unraveled, my plan was to catch the Wednesday ferry, but crossing Strada d’ell Assietta took a lot longer than expected. Fellow racer, Lee Pearce also had planned to take the ‘shortcut’, we were within 10 miles of each other and so the challenge was set. A race within a race, 370miles in 25 hours to catch the Wednesday evening ferry.

The ever increasing required average speed, heat exhaustion and finally dipping in and out of consciousness became too much for me. I booked a hotel, missed the Wednesday ferry and caught the Thursday ferry. At the time it was a real blow, the 400km I had cut off the route cost me a day, I figured I was out of the race. After a good feed and sleep I was reset, it turned the race in to two. I really benefitted from the rest and was able to ride the second half harder than the first.

Were there any interesting places you ended up sleeping along your route?

I generally just rolled my bivi out on the roadside. The strangest place, I guess, was a vehicle escape route on a steep climb on the border of Montenegro. I only slept for 20 minutes in fear of an out of control car crushing me.

We heard that Turkish soldiers shot at you! What happened?

I had met a cyclo-tourist on the Turkish border, we cycled together for a while sharing stories. I eventually needed a 20-minute power-nap to see me through the final 200 mile run in to Istanbul. We settled on a quiet spot at the side of the road, set an alarm and dozed off. We awoke and were aware we were being watched as flashlights lit the pair of us from afar. As we stood wondering who was at the other end, a rifle fired, the round ripping through the surrounding foliage. Both of us frightened, we made as much noise as we could, high vis’ tops on and bravely rode along my route towards the source of the gun fire. From the darkness, a barbed wire fenced military barracks appeared, the flashlights follow us until we’re out of site.

What was your favourite moment of the race?

I think, although stressful, being at the pointy end of the race. It was a different experience to the previous year. I was constantly racing, whether it was buying food, sleeping, or simply riding, knowing the execution of my training and preparation was paying off as the finish line got closer.

What was the hardest part of the race for you?

Crossing Montenegro heading North to CP3 (4th for me), I had a 30 mile route that took me through some very remote rough roads, I lost my food supplies somewhere along the route and suffered a very slow plod in the 40°C heat, forest fires were burning in the distance, the road side shrubbery scorched black. I sat on the gravel road in total despair, I felt like I had survived the apocalypse. I really did wonder if I was going to survive to the end of the day.

What recommendations would you give to anybody thinking of entering the TCR 2016 or any other ultra-long distance events?

Pack little and pack light; the fewer things you have, the fewer distractions you have. Reduce your non-cycling time, which in turn will increase your available cycling and sleeping time.

What’s next? TCR next year maybe? Any future independent adventures?

I’m going to wait until the TCR 2016 checkpoints are released before committing. 8th position is going to be tough to improve on but I’m up for the challenge. I’ve been reading ‘Journey to the Centre of the Earth’ (Crane Brothers), perhaps a Himalayan cycle adventure in the near future?

Jesse Carlsson explains the importance of the 'early overlanders' to modern day bikepacking races in Australia.

Kajsa Tylen; A Year in the Saddle - Part 2