In his latest film, Markus Stitz takes on an alternative version of the  NC500 and adds his own twist. Choosing exploration over speed, he hired a bike and stayed in a mixture of hostels and B&B’s along the way, mixing in some gravel roads alongside the regular NC500 route. Watch the film below and read on to find out why Markus wants to show how accessible bikepacking can be.

The whole idea around my recent journey was to make it as accessible as possible, especially for people new to bikepacking. Hiring a bike in Inverness saved me from bringing my own bike this time, which can be tricky on trains to Scotland, especially on the journey from Edinburgh, where I live, to Inverness. Hiring a bike is also a good idea for people who don’t own a bike, and want to get a taste of bikepacking first.

I stayed in a hostel in Inverness on the first night, and used B&Bs and hotels as accommodation, which meant I could reduce the kit I carry to a minimum, and enjoy a bit of extra comfort. I had to carry extra warm gear as the temperatures were below or just above zero on the first two days. It would be possible to replace the cold weather gear with a lightweight bivvy, mat and sleeping bag for those who want to sleep under the stars instead. 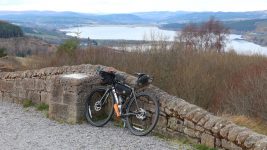 My journey also took me past two bothies on the route from Ullapool to Oykel Bridge, and combining with hostels in Torridon, Kinlochewe, Lael and Ullapool, you can do the 200-mile trip on a budget too, while not having to bivvy or camp in the company of midges in summer.

On the first day of cycling I took a train from Inverness to Strathcarron and followed the NC500 route up and down the iconic Bealach na Bà and along an equally scenic road to the small village of Shieldaig.

On the second day I set off from Shieldaig, admired the fishy mural on the public toilet, and combined the NC500 route with gravel tracks along Upper Loch Torridon, then continuing through the picturesque Glen Torridon. From Kinlochewe I ventured off the NC500 route towards Achnasheen and on to Lochluichart. After a stiff climb I was rewarded with fast gravel tracks and amazing views from Lochluichart Wind Farm, and met A835 at Loch Glascarnoch, joined the North Coast 500 again at Corrieshalloch Gorge, continuing on the road and an alternative route on the opposite side of the River Broom to Ullapool. 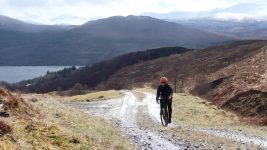 Day three took me from Ullapool on a well-known coast-to-coast route to Oykel Bridge, having already ridden this section during my inaugural bikepacking trip in 2006 and also during the Highland Trail 550. I chose the road option to Culrain, but there is also the opportunity to take the Highland Trail to Croik and continue from there to Ardgay. I stayed at White Rose Tower B&B in the countryside near Invergordon.

On my last day I followed Sustrans Route 1 first, with some detours on paths, passed the Clootie Well near Munlochy and cycled back to Inverness.

More information about the route can be found at bikepackingscotland.com/nc500

Never Scratch; How to Deal With Race-Ending Mechanicals

Ulrich Bartholmoes tells us how he went from race-ending mechanical to winning Transiberica.

In this beautifully shot film, Apidura Ambassador Marc Maurer sets off on a bikepacking trip in Central Asia.