Emmanuel Bastian and Guillaume Schaeffer are the creative and inquisitive minds behind The Japanese Odyssey; an annual bikepacking event in the Land of the Rising Sun that puts exploration and adventure at the heart of its ambition. Although The Japanese Odyssey is not a race, riders are given checkpoints and an ambitious time limit to complete their ride. However, this event is about spirituality and wilderness first and foremost – a curated voyage of discovery through less known parts of Japan. We asked Emmanuel to share some of his favourite memories from past editions of the Odyssey.

It was a cold September morning and Guillaume and I had met Brian from Hong-Kong, Gareth from Australia, Soon Aik from Singapour and Stuart from Tasmania the day before for a short ride together and dinner. They were the pioneers; the four entrants of the first edition of the Japanese Odyssey in 2015. And now, the six of us were gathering at five in the morning in Ōdōri Park in central Sapporo.

It was only a few minutes before the start. A few minutes until we would go off on a 3,000 km long adventure, crossing Japan from North to South. That unique instant just before the start wrapped up an exciting and exhilarating 10 month period dedicated to dreaming up the event – while living more than 9000 km away from Japan.

We started off. Cold rain was pouring down. Gloves were wet, bodies soaked and hands frozen. Guillaume and I stopped in the middle of nowhere for a hot beverage where we encountered Soon Aik. We hadn’t even cycled 40 km, but we were already physically affected. The route ahead was still long.

Since then, every departure is always both a relief, marking the end of the preparation and the logistics for the event but also a period of excitement. It is always fantastic to see how the common passion of cycling, shared by people coming from different parts of the world, creates a bond without compare and of uncertainty by leaving the entrants riding into the unknown.

We keep a lasting memory of every departure, as they all have a special taste. Whether it was starting in the Big City from Nihonbashi bridge in Tokyo, or from the Sakurajima Peninsula on Kyūshū Island, as last year, when the volcano erupted just a few minutes before the start and sent plumes of ash into the sky and on the road. Locals told us it was a “farewell” eruption.

The Year of the Typhoon

The 2016 Odyssey was one for the climbers. Entrants had a 14-day time limit to ride from Tokyo to Osaka – a quick look at a map will show you that the distance between the 2 cities is only 500 km but we added some difficulty by selecting 11 mandatory high-altitude passes. With a total distance of 2,800 km and an insane 35,000 m of vertical ascent, we thought we found the right degree of difficulty. But we didn’t count on Akisame, the Japanese word for the fall rainy season, which is considered the main typhoon season from the end of August to early-October. On the second day, incessant torrential rain fell on riders and kept falling for five days. It was a tough edition indeed. 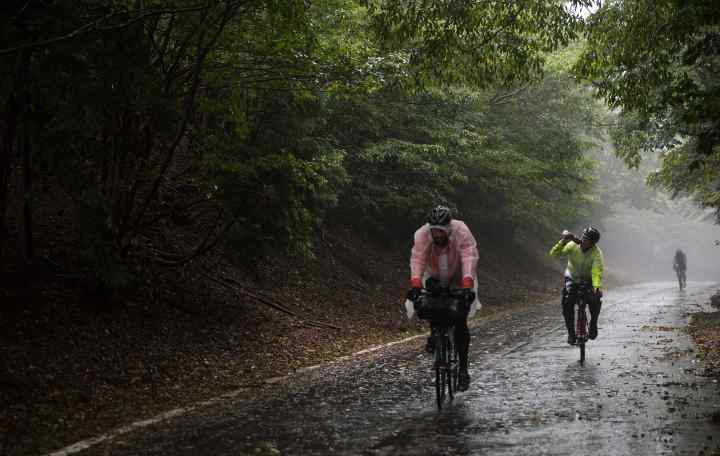 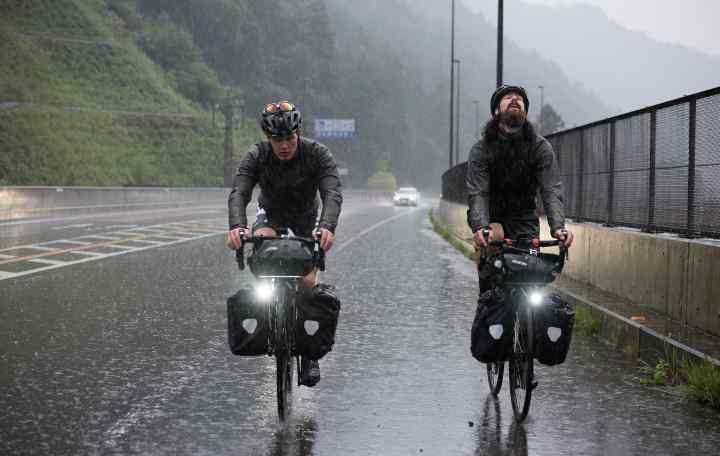 Falling off the Radar

Rider Duncan Lloyd started his 20 km ascent of Mt Ontake at nightfall on day three of the second edition of the Odyssey. Three hours later, his tracker indicated that he had reached the control point and then stopped on top of the mountain. We found it odd that he would spend the night at 2,200m of elevation but thought that maybe he didn’t want to undertake the descent at night, with the fatigue and the cold weather.

In the morning, we checked his position hoping to see a moving dot. But, no, his position hadn’t changed. We tried to contact him via social channels but didn’t receive any answer. A few hours later, a friend of Duncan contacted us wondering what happened to him, as he couldn’t reach him on the phone. We started to get anxious.

After some discussion on the entrants’ private group, a rider decided to climb Mt Ontake to the tracker position but couldn’t find Duncan or the device. We finally received news from Duncan the next day. He actually had lost his tracker on top of the mountain – by kicking it at night while straddling over the bike.  And he had no way of contacting us as his phone was dead after two days of non-stop rain. But he was fine and “en route” to reach Osaka before the 14-day time limit.

Yusuke Ochiai is 36 years old. He lives near Nara and works as a social worker.  It is an understatement to say that he is obsessed with cycling. Have a look at him, at his slender body, sitting on his De Rosa frame, spinning the legs and clocking the kilometres. It seems easy.

Two months after having completed the 2019 edition of Paris Brest Paris in just over 48 hours, he took part in his third Odyssey. On his first attempt in 2017, he was the first to reach KitaKyūshū. The following year, in 2018, he was again the first to reach Tokyo after a 2,700 km effort and more than 33,000m of elevation in about eight days. In 2019, with 53 entrants, the competition was going to be tough. Despite the 27-degree heat in Kagoshima, the event was off to a fast start. Yusuke had to wait until day two to take the lead. After four days on the bike, he was still under the threat of a bunch of four riders:  Stepan Aubrecht, Tomoyuki Maruta, Sacha Mutel, and Grégoire Peuvion – just a few km behind, trying to fill in the gap.

But the checkpoint climbs, the accumulative elevation added with the distance required to be ticked off every day and the lack of sleep, would start to break riders, causing them to slow down or to scratch and pull out of the event. Yusuke’s dot on the tracking map seems to never stop moving. He reached Tokyo first, followed by Stepan one day later. He couldn’t even attend the finishers’ party on day 10, as he had no more vacation credits and was already back at work!

The Japanese Odyssey is not only about going fast. We like to take the entrants into a secluded, less known Japan. The country has a lot to offer, even if for westerners it can be difficult to get a grasp of the country’s traditions or its people. But when it happens it is magical.

Guillaume and I were sitting on the floor on the parking lot of a Konbini (convenience store) in a small village. Mountains were looming in the distance. A car parked about 30 meters from us. Its driver got out and walked smoothly towards us. He looked about 65 years old, a slender body, his trousers were the same colour as his car and he wore immaculate white sneakers. He came towards us, and then sat on the pavement next to us, crossed his legs, and started to speak to us in English.

He was puzzled to meet non-Japanese people in that part of the country and wanted to know where we were heading to. We explained to him that we were on our Odyssey and had been riding our bikes for five days. We were aiming for the Alps and gave him a rough overview of our planned route. He stood up, walked towards his car and opened the trunk. He then came back to us with two big red shiny Fuji apples in his hands and offered them to us. “Personal harvest” he said. He bowed, left us and entered the shop. 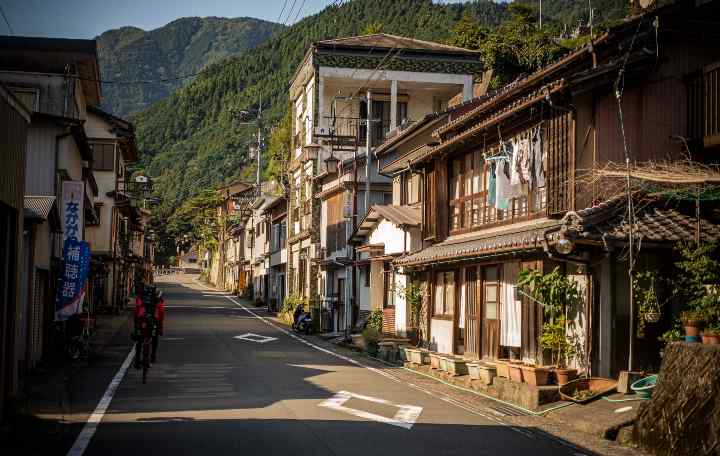 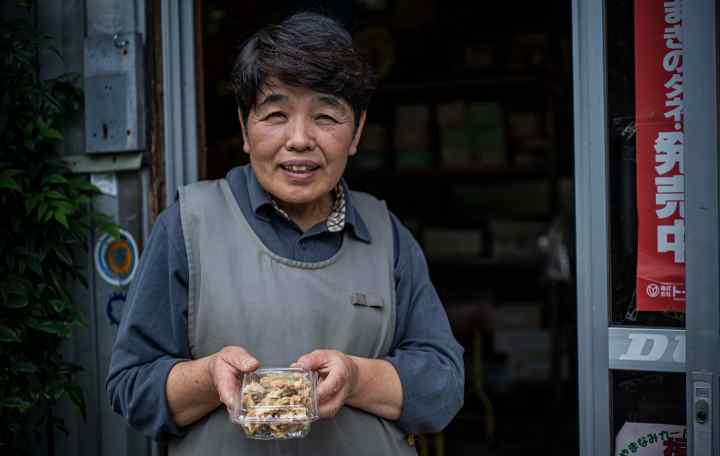 Samnium Bikepacking Story; A Journey Through Ancient History and the Flavours of Times Gone By

A behind-the-scenes look at how we created the world's first Full Frame Pack for e-Bikepacking.