Naresh Kumar has travelled more than 10,000km on a tandem bicycle, inviting strangers to join him in 13 countries, while raising awareness and funds to combat human trafficking. Here, we learn more about the extended tours Naresh has undertaken and the individuals that have joined him along the way.

Many of the most significant experiences in Naresh’s life have come by chance.

A few years ago, Naresh was invited to be the best man at a friend’s wedding in Alaska. On the day, he struck up a conversation with Brian Wall, uncle of the bride, who had a project called The Empty Seat. “He would take his tandem bicycle and rig it up with GoPros in various positions. He’d pick up strangers, like the local milkman or baker, and he’d ask them: ‘So, what’s your story? Who are you?’ He’d record this and compile the meetings into short video segments”.

After hearing about the enthusiasm with which total strangers jumped on the tandem, and how they’d open up while riding with someone they’d only just met, Naresh’s imagination was captured. A few months later, while taking part in a Tennessee brevet, he had the chance to try one himself. A couple had completed the brevet on a tandem and Naresh asked if he could join as a passenger for a quick jaunt around the block. “That was a pretty scary experience as you can’t see anything in front! I was trying to steer from the back, but quickly realised that you have no say over direction or when to stop.”

In 2015, Naresh ran/hiked the Te Araroa trail – a 3,000km route the length of New Zealand in sandals which he completed in 87 days. While undertaking the mammoth unsupported journey, Naresh took the opportunity to raise awareness and funds to combat human trafficking, a cause that he has campaigned for over recent years. When he tried riding the tandem, he found a metaphor between the feeling of relinquished control and with those who are victims in this trade.

Naresh returned to New Zealand, ready to travel the length of the country once again, but this time on a new method of transport: a tandem bicycle. “The feeling of letting a total stranger take control makes a big impact on you. It seemed like a great way to raise awareness for human trafficking, but in a fun and adventurous way”.

He nicknamed the project Freedom Seat, and began his ride in early 2017. “I had no plans at all! I bought a cheap tandem that was certainly not meant for long-distance adventures, but everything worked out amazing”. He did end up with around 36 broken spokes during the ride but fortunately had far more guests on the journey. “140 people jumped on the bicycle and pedalled with me. The youngest was 5 and the oldest was 84”.

“The first guy that I picked up was a British tourist taking pictures at Cape Reinga at the very Northern tip of New Zealand. He’d never seen a tandem before, so he asked if he could get a photo with the bike. He and his wife stood next to my tandem and I took the photo. As I started pushing the bike to get to the highway, he asked me ‘So, you look pretty loaded up for an expedition. Where are you heading?’ I just pointed south and said ‘I’m going 3,000km that way!’”

Confused about the empty seat on the tandem, the tourist asked where Naresh’s partner was. Naresh explained he was doing the ride to raise money for charity. “I told him that I’d really appreciate it if he could spare some muscle power for a while. And then, to my surprise, he gave the van keys to his wife, hopped onto the bike and rode 25 miles with me. I felt sorry for him because it was a pretty hilly start! I was in my cycling clothes, but he was in cargo shorts and a cotton shirt, huffing and puffing. He was really pushing his limits, and when he got off the tandem, he filled up my packs with bananas and extra water before limping away. Five minutes after saying goodbye I had a notification on GoFundMe. His was the first donation we received for the mission.”

The trip was a success. Naresh cycled more than 3,000km over the next 35 days and raised over $50,000 NZD. Just a few months later, yet another chance encounter led to a second chapter in the Freedom Seat story. 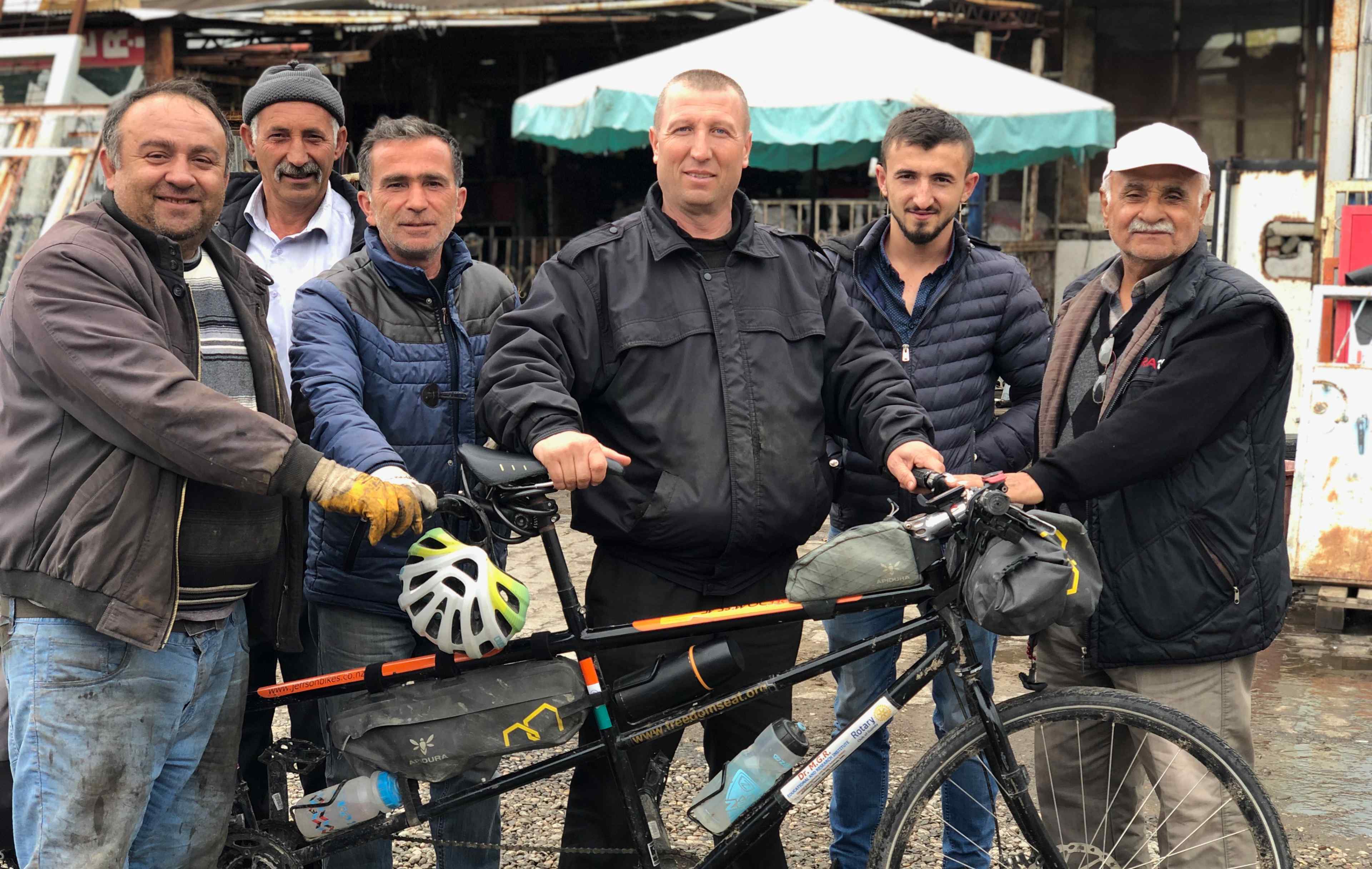 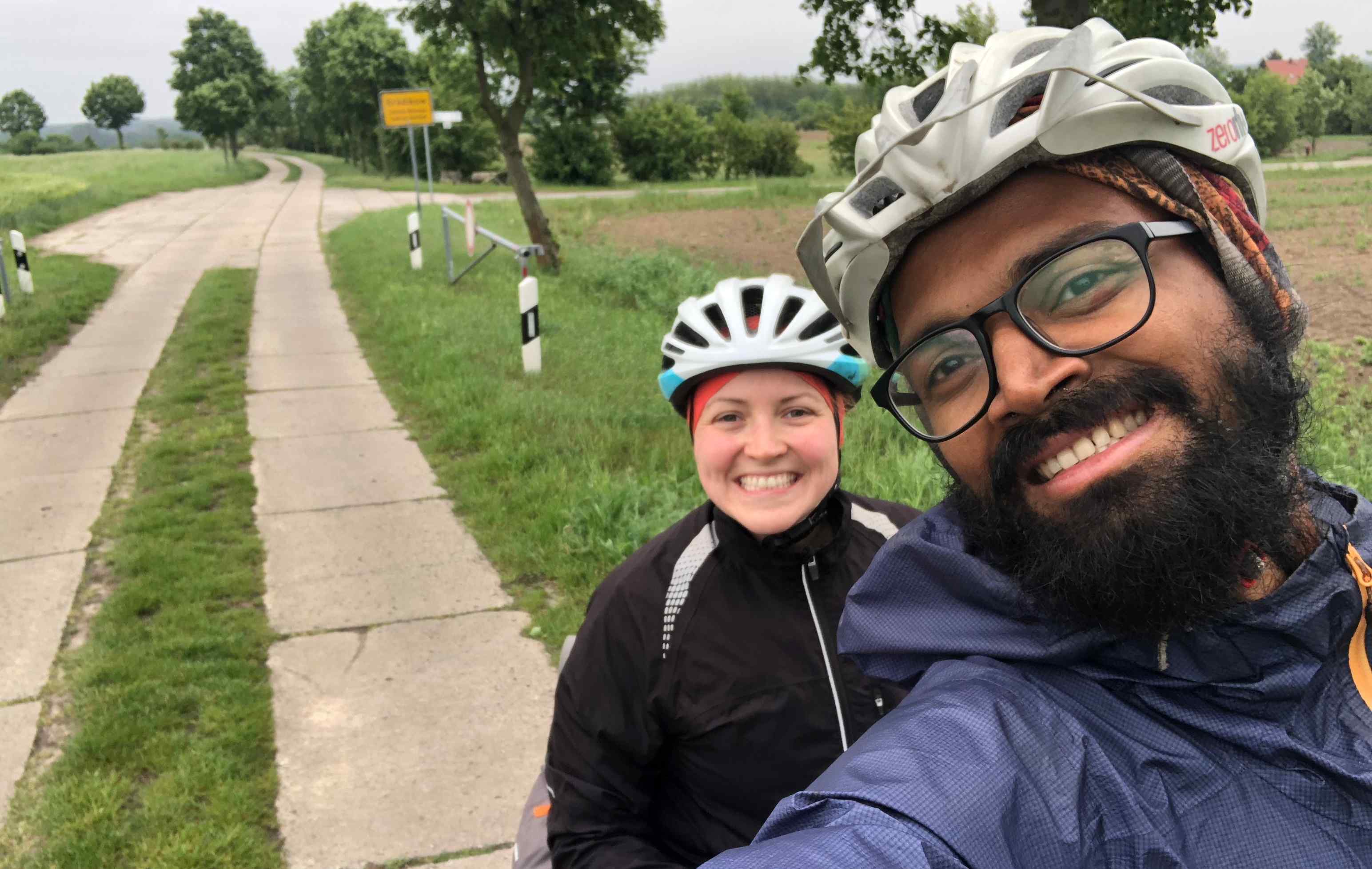 Two days before Naresh was about to take part in the 5,500km Indian Pacific Wheel Race across Australia, he received a phone call from one of the Rotary club presidents at a venue he had spoken at in India. “He asked if I would consider riding a tandem from India to Germany and time my arrival with the start of a conference with 40,000 attendees from all over the world. I didn’t even think for a second – ‘yeah, let’s do it’!”

Naresh had to plan timings, visas and travel logistics, but otherwise, the project was the same as the ride in New Zealand. He’d pick up strangers whenever he could over the following 3 months and they’d join him for a short while. Some would sit on the bike for a short spin around the area, but others would pedal for a few hours. In 74 days of riding, Naresh spent only 3 days without any guests.

After crossing the Strait of Hormuz, Naresh rode through Iran and crossed Turkey before entering Europe for the final leg to Germany – inviting strangers to join him wherever he passed. “A guy in Iran even got down from his camel so that he could get on the bike. Lots of people in cars would be curious to see this random guy riding a tandem by himself. They’d usually stop in pity, thinking that my girlfriend had broken up with me and that was the reason that I was riding alone. But then I’d tell them what I was doing and they would take turns cycling with me. I had a customs officer on his way home from the harbour, the CTO of an airline and road-side fruit traders. People from every walk of life.”

After cycling 8,646km Naresh finally reached Hamburg, having had 180 strangers and friends help him pedal the distance. Since then, he’s competed in another iconic race in the ultra-distance calendar – the Silk Road Mountain Race – an entirely different bikepacking experience. “In a race, you’re like ‘go, go, go!’ That’s not bad in any way, it’s still valuable to dig deep and push your limits, but they are two polar opposites.”

“I like both ends of the spectrum. With Freedom Seat, time is not really a factor, but you have to step out of your comfort zone in different ways. Approaching a stranger and asking ‘do you want to go on a ride with me?’ is really hard because you have to be OK with the rejection that may follow. Are they going to say no and give you a doubtful look? Are they gonna call the cops on him or are they going to hop on and pedal with you? The feeling of approaching a random stranger and asking this will always be daunting. They’re like two extremes, the racing and Freedom Seat – but given the chance, I’d always rather do a tandem ride over a competition.”

The incredible journey of Maria Leijerstam, the first person to cycle to the South Pole.