Nelson Trees;
This is The Silk Road Mountain Race 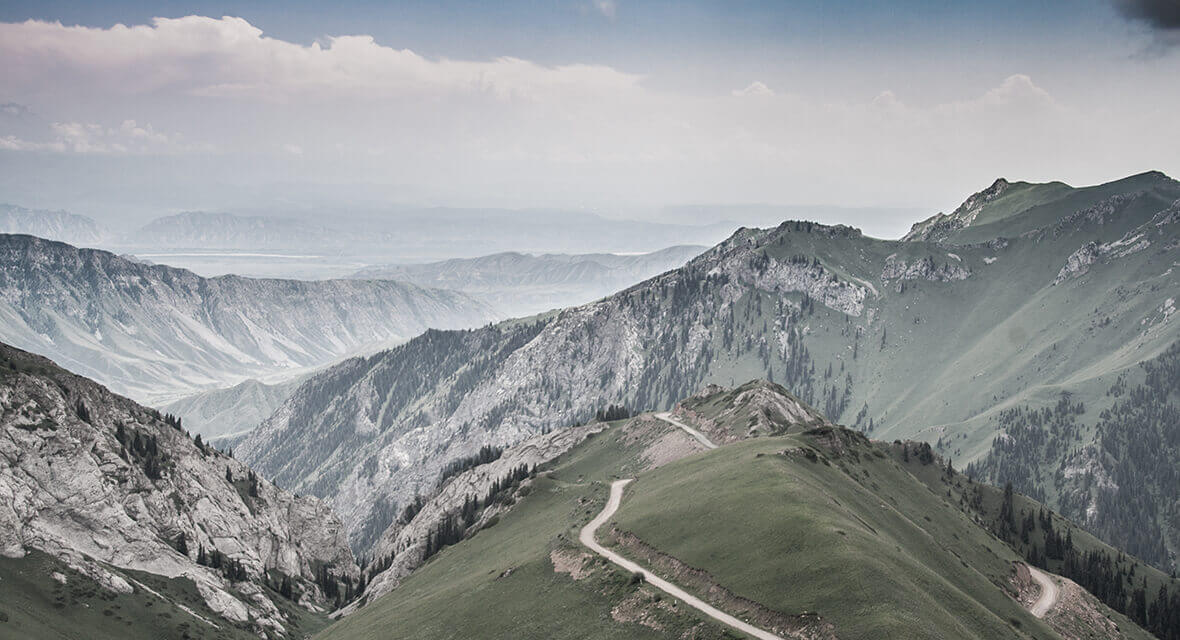 Nelson, what made you want to create a new unsupported bikepacking race?

It’s something I’ve been thinking about for a while. Ever since racing the Transcontinental, I’ve been wanting to get more involved with the unsupported racing scene, take it beyond just participating in these events, and contribute something to the community.

I first discovered Kyrgyzstan back in 2013 when I was cycling from Shanghai to Paris, and although I wasn’t there for long, it left a lasting impression. The biggest attraction is the natural setting, and what hits you first – especially if you come from Europe – is how untouched the natural habitat is. There are these vast expanses of wilderness with very few marks of civilization. No buildings, barely a road – nothing.

It’s a place that has been isolated by its geography, despite being on the ancient Silk Road, and as such the way of life its inhabitants in the high pastures follow has changed little over the centuries. The semi-nomadic lifestyle that enables the Kyrgyz people to survive in this harsh environment endures to this day, as does the deeply entrenched culture of hospitality. You’ll most likely come back with lasting memories of encounters with locals.

From a practical perspective too, it also helps that you don’t need a visa to get into Kyrgyzstan, return flights from Europe are pretty reasonable, and the country is really quite safe.

Was making it an off-road event a conscious decision?

There wasn’t really a conscious decision to go off-road, as it is kind of dictated by the setting. I had originally thought of doing something similar to the Transcontinental, giving riders checkpoints and their own choice of route between them. Kyrgyzstan isn’t really ideal for that though, as there are so few roads, with very little information on them, so riders would most likely all end up on the same roads anyway.

The fixed route will hopefully make the country more accessible by reducing the necessary research that riders will have to do, while taking none of the challenge out of the race. It’s fully unsupported, and while riders will have a fair bit of information on possible resupply points, it won’t be enough so that they know exactly what to expect.

What aspects of the Silk Road Mountian Race are going to make it a challenge?

The route itself will probably be the biggest challenge. It’s long, hard, and crosses a number of high passes close to 4,000m in altitude. The weather can change very quickly too, and riders will likely face rain or snow, as well as late summer heat down in the valleys.

Resupply is probably the second biggest challenge. We will be providing information on where resupply is available, and what kind of nutrition options there are, but it won’t be easy. At times there’s literally nothing on route for a couple of hundred kilometers, meaning riders will have to think very carefully about their nutritional needs before they start these long sections of wilderness.

In many races, not receiving outside assistance is largely a conscious choice: Help is there, at the touch of a button on your phone, or from a passing stranger, but you choose not take it. In the Silk Road Mountain Race, when things get tough you generally won’t have phone coverage and there might not be anybody around for miles. Riders will have to be fully self-reliant.

Just how remote does it get?

I’ll be putting detailed route information in the race manual, which will become accessible to riders during registration [which opens on November 24th]. The toughest section in terms of resupply will be around Checkpoint 2, at Kel Suu, a remote lake near the Chinese border. There are roughly 250 kilometers without resupply to get there, and another 140 kilometers afterwards to reach the next town. I’m currently working on solutions to ensure that there are supplies available at the yurt camp as riders come through, but riders will certainly need to carry more supplies for sections like this.

Has it been difficult to bring together?

It’s been a lot of work getting the different aspects of the race together and figuring out if we could even make it work at all. It’s a very wild place, and a serious responsibility bringing people out there in the context of a race. We’ve put a lot of effort into making sure it’s done right though, and that requires a fair amount of logistical thought and race infrastructure.

The single biggest task was physically going to Kyrgyzstan and scouting the route for the race, and I took six weeks to do this by myself this summer. There was a lot of hike-a-biking and dead ends involved in that trip, as what looks like a potential route on a map can be very different in reality.Then, after the Transcontinental [in which Nelson finished 6th], a group of us went back out to finalise a few sections and check out some alternate routes, which gave us the chance to gauge the difficulty and also how different bike setups held up.

After scouting the route there are countless other things to think about too: tracking solutions, control vehicles, emergency procedures in case of an accident, checkpoints, volunteers, satellite phones. The list goes on…

What experience do you think riders should be arriving at the start line with?

Riders will definitely need to know what they’re doing before coming out, as the Silk Road Mountain Race will be a pretty serious undertaking. Ideally, they should have experience with multi-day bikepacking trips – preferably off-road, in remote areas. Experience with unsupported racing would also be a big help. Basically, riders need to understand how to look after themselves in a harsh environment, when they’re exhausted and near their limits.

However, I also don’t want the race to seem like something that is completely off-limits to anyone except the most hardcore bikepacking racers. When I first raced the Transcontinental it was the first race I had ever taken part in, and I want to give people that chance too.

It will be a tough race. Quite a few will drop out, and others won’t make the finishers party in time, but it is an achievable objective for a fit, well-prepared rider. We are still finalising the entry procedure that riders will need to complete at registration, but we’re not going to shut out inexperienced, but seriously motivated riders. At worst we’ll ask you to prove yourself in some way, which could be asking you to complete a ride or trip to show us you’re capable.

What kind of bike would best suit the conditions riders will face?

I think that there are a number of different setups that could work well. A lot of the route follows pretty good gravel roads, but there are quite a few rougher sections too. The ideal bike is probably a rigid 29″ mountain bike with at least 2.0″ tyres, but you would also be OK on a modern gravel bike with 650b and 2.0″ tyres. To be comfortable on rough roads for long periods of time will be asking a lot of any bike with tyres skinnier than that, but it’s not necessarily impossible. It’s going to be interesting seeing what kind of bikes people turn up on.

You’ve been competing in ultra-races for a few years now. How has the sport changed in that time?

I’ve definitely seen rapid growth in the unsupported racing scene, and there are more and more races appearing all the time. From a racer’s perspective, it’s also definitely more competitive, as races are attracting stronger riders, people have more experience, and train harder. There’s also less variation in the equipment used by racers as the best solutions are becoming more universally adopted, and there’s generally more information on how to prepare for events.

How do you see self-supported, ultra-distance bike races evolving in the future?

I think we’re at the beginning of the evolution of this scene. I hope that the grassroots growth that we’ve seen so far continues, but I feel that it’s inevitable that it will become more commercial. That’s not necessarily a bad thing, as it’ll mean more events, and in some cases better-organised events, but there’s a real risk that as this happens it’ll lose much of the appeal that these races had in their original simplicity.

The idea that all you need for a race is a group of people, an idea, and a sense of fairness and equal opportunity, is at the heart of bikepacking. I hope that the Silk Road Mountain Race will be a move in the right direction, following in the footsteps of races like the Transcontinental, which were built to bring adventure back to cycling and share it with the community.

Finally, why should people sign up for the Silk Road Mountain Race?

The race will be a different experience for a few reasons, mainly because of where it takes place. Kyrgyzstan is a destination that is slowly starting to gain attention in the adventure travel and bikepacking world, but its potential is essentially untapped, and participation in the race is going to be a journey of discovery for most riders. There are few places where adventure on this scale is still possible, and it will take the meaning of ‘unsupported’ to a new level.

It’ll be two weeks of your life where you leave behind modern life and experience something that will be difficult and unforgiving, but at the same time incredibly simple and rewarding, reducing life to the few tasks required for forward movement.

Registration details can be found on the website for the Silk Road Mountain Race opens on 24th November 2017. The race itself starts near Bishkek, the capital of Kyrgyzstan, each August.

The greatest female cyclist the world has ever ignored