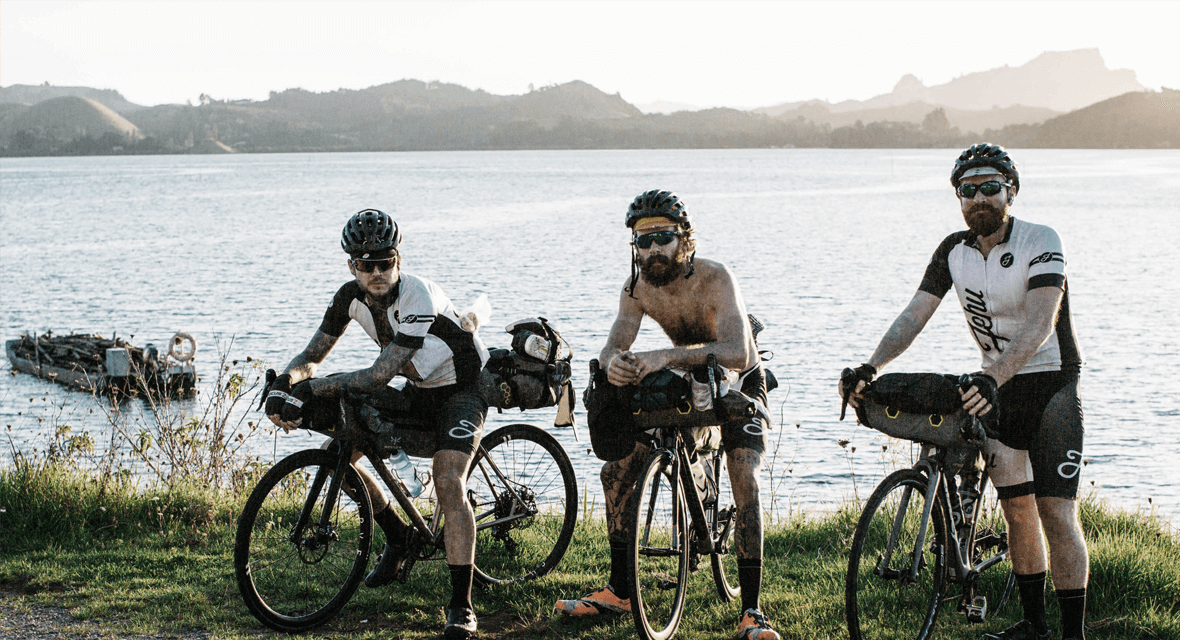 I knew things had turned serious when I found myself travelling from Manchester to Milton Keynes to collect a bike Ridley Bikes had generously offered me for the trip. When you’re handed brand new wheels from a top cycling company, you know you’re about to undertake an epic journey.

The truth is, I was nervous. But, as I arrived in Melbourne and hugged my best mate, whom I hadn’t seen for nearly two years, the enormity of what we were about to undertake kicked in. While we were heading to New Zealand to take on some of the toughest terrain together, I think most cyclists would agree that a long distance trek is all about the personal challenge.

I’m not a cyclist. I discovered bikes about two years ago after a series of ‘life moments’ saw me seeking something new to get me out of the house and inhaling fresh air. Cycling changed everything for me – it gave me time to think and reflect and it brought my smile back. I got into watching documentaries and feature films like Long Way Round and Inspired to Ride; people facing the world and their own mental blocks head-on and coming out the end with a new perspective. They captured my imagination and made me think. Here I was, a freelance photographer with a new-found passion for cycling. Maybe it was time for my own road adventure.

New Zealand seemed like an obvious location – returning to my roots and rediscovering the country I left 20 years prior. I had never been back and was curious to see my home through adult eyes. As the idea grew in my head, so too did the support and encouragement from people around me. This was no longer just a simple dream – soon I had signed up to raise money for Claire House, a children’s charity on the Wirral where I grew up after the move from New Zealand, and had received amazing sponsorship from a host of organizations. Everything from my bike, bike luggage and right through to my socks was given to me by sponsors who believed in my ability to ride across both the north and south islands of New Zealand. The pressure was on.

Half way up the first mountain of my 25-day trek through New Zealand, I was kicking myself for having packed my drone. Those potential aerial shots were not worth the pain that was ripping through my legs and tearing out my lungs. When you’re pushing yourself up a mountain and you’re sleeping in a tent that night, you realize how little you really need (or want) attached to your bike to get yourself up a hill. A quick visit to the Post Office the next day saw half of the weight stripped from my bike and it was back on the road.

Despite months of training, extra leg sessions at the gym and a seriously healthy eating plan (including going vegan and no alcohol), nothing could have prepared me for the intensity of those inclines. Even my initial warm-up rides through the Dandenong Ranges outside of Melbourne resulted in a serious case of sunburn. Nothing about this ride was going to be easy. The landscape is merciless as around every corner another mountain laughs in your face. And while the mountains seem tough, it is the long flat straights of nothingness where all you can do is listen to the sound of your own thoughts questioning your ability to make it to the end. Podcasts and a well chosen playlist helped drown them out but the first couple of days were the true acid test as I watched other riders disappear off in front of me, my confidence in my self declining faster than my bike could roll.

But, you push on and find yourself climbing mountains. You grit your teeth and push the thoughts to the back of your head and keep going because that’s all you can do.

Of course, it wasn’t all knuckle grinding pain – there were many shining lights. Arriving at Cape Reinga on the third day, after a 150 km ride arriving with no food and water due to a huge oversight that we were in the middle of nowhere with no supermarkets, some kind souls at the campsite saw our plight and handed us pasta and beers which we hungrily accepted. Those killer mountains on route to the northern-most point were instantly forgotten as I lay out on the sandy beach and watched the stars. You could literally see everything – the entire universe spread out in front of me and it was there to be enjoyed in that moment. I didn’t get my camera out – I just drank it in and smiled.

From then on, my attitude shifted a gear – as hard as it is to climb those mountains and defeat the long stretches, when you get to the top or the bend in the road, it’ll be worth it.

Like many things in life, it is the people you meet along the way who really make things shine. From old friends, Ian and Vicki, collecting me at the Auckland airport and keeping tabs throughout every leg of the journey, to complete strangers who offered up meals and support without expecting anything in return. So often I was helped by kind, generous folk who welcomed us into their homes, giving us the use of their washing machines and showers. Perhaps most glorious was being surprised with homemade vegetarian pasta at the top of a long climb somewhere on the South Island by a couple who I had met the night before at a camp site. It was the genuine human generosity that showed that, no matter how much my muscles hurt or how alone I felt on the open road, someone would be there to pick me up and push me on.

There were moments when my fitness and ability to complete the ride were questioned and other riders powered ahead, leaving me to take on the day’s challenge solo. But, as I crossed over to the south island, I knew I was fitter and stronger and more capable to completing this adventure that I had ever been.

Finishing my journey took awhile to sink in – it wasn’t until I had dumped my bike and caught the gondola to the top of Queenstown Hill that it dawned on me that, Yeah, I have made it.

When you spend that much time on a bike, you have a lot of time to think. And those mountains and long flat roads taught me more about myself than I expected. The journey took me through some glorious landscapes and showed me the true beauty of human kindness – something that, when I see a bike packer or a fellow wanderer, I will always offer help or support.

Pana Mogren tells us about bikepacking Jotunheimen in winter, type 2 fun and leaving the noise in the mountains.