Created in 2021 by Raphael Albrecht, the mastermind behind Orbit 360, Ride for A Reason gives riders the chance to make their own routes based on their preferences of surface and riding location, whilst competing with other individuals around the world.

2022 sees the addition of a 90km option and the opportunity to ride in a peloton, all scheduled to take place between 5 March and 3 April 2022. The distances, tackled as loops (or ‘orbits’), are ridden unsupported and non-stop. Riders can rest but once the clock starts it doesn’t stop. Riders will be able to register for a small charitable donation and will then need to plan and ride their own route to race individually and compete worldwide. There will be time-focused rankings, but Orbit360 will also feature the most fun stories behind the routes ridden. To be listed on the leader board or featured in a collection of the most inspiring adventures, riders need to upload the tour to Komoot and tag Orbit360 as a participant.

If you’re thinking of entering, we asked Raphael for some tips on getting the most from the event.

“I think the 180 km category is possible for many riders. If it’s still a scary number for others, I would suggest starting early in the morning. Take some warm clothes with you and then ride slow and eat fast!.

The original Orbits are based around off-road riding. For #rideFAR the surface is up to the rider. Use the different map layers to get a good understanding about the different roads, ways, or paths.”

The fastest rides in 2021 feature two close friends of Apidura, so we thought we’d take the opportunity to look back at their rides for some inspiration for 2022: 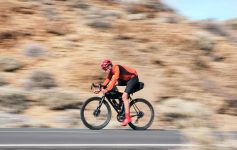 Ulrich is no stranger to riding fast and pushing his own limits tackled both the 180km and 360km categories in 2021. Based in Munich at the time, Ulrich rode a 360km loop that took him northeast before turning south into the foothills of the alps. It was snowy and cold, but he still managed an impressive average speed of 34.6km/h for 10 hours and 24 mins whilst climbing 1,730 meters. Upon finishing this ride, he found that Marius Karteusch had set the Orbit speed record on the 180km ride.  Feeling encouraged by his 360km ride, Ulrich adjusted his originally planned 180km route to take advantage of warmer weather, with no hills, to see if he could beat the record. It went to plan and he covered the distance in 4.44 hours with an average speed of 35km/h.

Ulrich told Raphael at the time, “reaching my personal best, speed-wise was more than enough of a challenge for me. And I was inspired to see the different approaches to the challenge, from “going as fast as you can,” to “having an adventure with camping overnight in the cold and early spring”.” 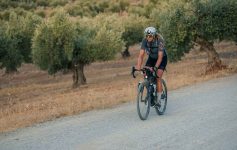 Marion is no stranger to long-distance riding, having competed in the sixth edition of the Transcontinental Race as a pair and then winning the women’s race at Badlands in 2021. She told us shortly after winning the race that she used the Orbit360 Gravel Series to help condition her body and mind for mental strength when dealing with the more challenging parts of that race. Her 2021 season kicked off with the Ride for a Reason challenge where she set herself a challenge of riding 360km in under 13 hours.

Worried about her fitness, she planned a flat route from Hamburg to Wittenberg hoping that she wouldn’t face a headwind on the Elbe dyke on the return loop. Describing her ride afterwards, Marion “With the aim of being as fast as possible, I planned a boring flat loop along the Elbe over a bridge and back. When I realized that the bridge was closed and I didn’t want to lose any time replanning, I quickly decided to take the same route back. That was even more boring”. That said, she found her rhythm and completed the 360kms in 12 hours and 10 minutes, well ahead of her plan.