Last summer we challenged the community to take part in our global cycling event, Parallels. Over 200 riders took part, covering huge distances within 24 hours and plotting creative routes across the map. This year, Parallels returns over the Northern Hemisphere’s Summer Solstice weekend, 19-20th June. Here, we explore some of the varying routes and tactics that participants have planned for the event.

Apidura team member Jonathan isn’t quite up to 24-hours non-stop. Instead of a record-breaking ride, he’d rather use Parallels as an opportunity to do some creative route planning and explore new places. Fortunately for him, last year’s Parallels ride has an obvious ‘part B’ for 2021. 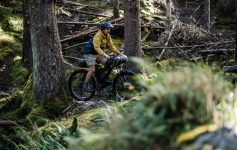 “Early last year I discovered a website that lists all meridian markers across the UK, and it captured my imagination. Despite living near Greenwich, and being familiar with its significance as a prime meridian marker, I had no idea the longitude was marked in so many other places, often with remarkably low-key monuments.

For the inaugural Parallels, I decided to cycle south from where the prime meridian crosses the river Thames, visiting as many meridian markers as possible between London and Brighton. I’d planned on cycling home from the coast, making it a 200km+ round trip, but searching for all the markers made it a stop-start day, and in the end I caught the train back to London.

This year, I’m doing a similar ride, but cycling the meridian line from Grimsby (near the northernmost marker on mainland UK) back to London. It’s a much bigger challenge than last year, with a total distance of around 280km, but I’ve not been able to stop thinking about it since last summer. Once again, I’ll be trying to spot as many of the meridian markers as possible!”

Raphael is an accomplished ultra-endurance rider, having raced numerous bikepacking races around the world from Kyrgyzstan to Morocco. As the organiser of the Orbit 360 series, Raphael is no stranger to route plotting, especially when it comes to long and challenging rides. In 2020, he managed a huge ride in 24 hours, and this year he has a similar distance planned. 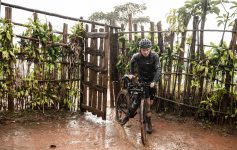 “Last year, I cycled from the German-Dutch border to Frankfurt Oder, which is on the German-Polish border. I liked the idea of crossing the entire country in 24 hours, and I managed to finish the 600km ride just in time!

This year, I’m riding South to North Germany, once again attempting to cross a large chunk of the country in 24 hours. It’ll be a tougher challenge than last year: the distance is slightly further at 613km, there’s more climbing involved and the wind conditions are likely to be tough. The first half of the route will be quite hilly, with the biggest climb around the halfway mark, but the second half will be flatter through wide-open landscapes.

There’s a practical side to this challenge, too. I’ll start in Stuttgart, where Votec’s HQ is, so I can catch up with the team there who I haven’t seen in a while. They’ll soon provide me with a new bike, which means this will be my final ride on the current VRC. What better way for a final ride, than a 600km+ ride back to home in Berlin.”

Rory is another Apidura team taking a unique approach to the challenge. Over the last 18 months he’s shifted his focus away from the road towards gravel, and he’s hoping to compete in the off-road Atlas Mountain Race towards the end of the year. Rory has plenty experience with route planning and riding long distances, so it was a surprise when he told us that he’s aiming for an individual time trial on the well-established off-road ‘Norths Downs Way’. 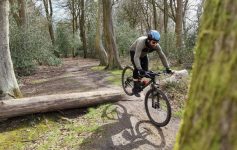 “After spending so much of the past year riding off-road I really wanted to test myself on the MTB in a race format, with limited stops while riding as hard as possible. I am comfortable sat on the road bike for hours on end, but this is something of an unknown for me with most of my off-road riding topping out at less than 100km. Parallels is an opportunity for me to take advantage of the longest day in the year and see if I can ride the full 240km North Downs Way in daylight.

When exploring my local trails, I often touched on the North Downs Way, with some parts providing outstanding views across two areas of outstanding natural beauty: the Surrey Hills and Kent Downs. It was like an oasis from the urban sprawl and when I discovered that Cycling UK had published a rideable route it was placed on the list as ‘one to complete’.

The bonus of having such an accessible long-distance trail so close to home, is that I can catch the first train out of London and arrive at the start in around an hour. From a Parallels perspective you’ll hopefully see a rather ordinary 170km diagonal line cross the South East of England which won’t really tell the true story of a hard day spent traversing the ridgeline in the hope that I make the last train back home.”

Mario Casmirro loves tracing history throughout his rides. His recent project ‘Samnium’ journeys through his local region in Italy, exploring how Samnite history is still visible today. For Parallels he’s combing a desire for a deeper understanding of the area, with a route that goes across the country from coast-to-coast. 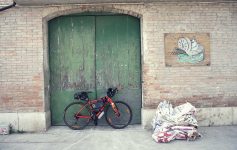 “I have been cycling a lot around my region this year, so for Parallels I want to take on a ride that will continue this theme. I’ll start from Termoli on the Adriatic Coast and ride across Italy, finishing in Naples on the Tyrrhenian Sea. I’ll pedal along the ancient Bourbon road of 1800 that connected the Kingdom of the two Sicilies.

I often cycle 80km of this route for my long commute to work, but the rest will all be new to me. I expect the first 150km to be quite challenging, with 3,000m climbing. Hopefully the second half will be easier, but it will still be very hot at this time of year.

I’m attracted to the idea of seeing the sun rise from the east over one sea, and then seeing it set in the west over another sea. It doesn’t hurt to be finishing in Naples, one of my favourite Italian cities, for a meal at the finish!

Lee Craigie and Rickie Cotter's journey - as racers, friends, and individuals, at the Tour Divide.