Every Summer, we challenge our community to take part in our global cycling event, Parallels and ride the longest straight line possible. Hundreds of riders have taken part over the years, covering huge distances and plotting creative routes across the map, which can be viewed on the Parallels homepage.

Here, we explore what some of the most creative plans we have seen for Parallels 2022 so far. Read on to find inspiration for your own Parallels 2022 route.

Taro Okamoto is a keen adventurer in Japan who loves to share his enthusiasm for bikepacking. Taro plans to explore one of Japan’s famous national cycle routes, Shimanami Kaido, and ride 24 islands in 24 hours. 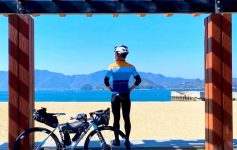 ‘My local Shimanami Kaido covers over 100 islands. It is a dream destination to ride for many cyclists all over the world. As a local cyclist, I have always wondered if it is possible to visit 24 islands in 24 hours by bike!

I have tried to plot the most efficient route possible, however, there are only 20 bridges. I contemplated swimming the 5km across the water to the other islands, but this is definitely not achievable with a bike! The alternative option is for me to catch a ferry but there are only 3 ferries a day. This presents large time pressures that may make or break my plans.’

Ibai Fradejas, an experienced Basque cyclist and founder of Dieadar Gravel, plans to ride 320.8 km from Luchon to Bayonne, in France. He has decided to use Parallels as an opportunity to come together with members of his local community and enjoy a shared love of cycling. 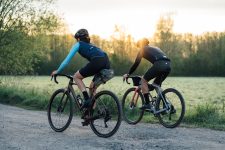 ‘The reason I chose to do this particular route is because it is a yearly tradition of ours to ride the first Pyrenean stage that took place in the Tour de France on July 21, 1910. The route climbs the passes of Peyresourde, Aspin, Tourmalet, Soulour, Col D’Aubisque and Col d’Osquich.

For me, this is a great way to spend Parallels, exploring a beautiful part of the world, with good friends and many hours of daylight. It is incredible to be able to ride the route that the tour rode for the first time in 1910. It is a great feeling to pay a tribute to an event that is such a large part of cycling today and do it whilst enjoying everything I like most about cycling.

My plan for Parallels is to take the opportunity to enjoy a day on the bike with members of my local cycling club. Many members of this club are seasoned long-distance riders, whilst others are just starting out. We will all come together to enjoy a shared passion that is cycling. I believe that this group of people inspired me to become the ultra-distance cyclist I am today.’

Josh Murphy considers himself a country mouse in the bustling city of London. His Cumbrian outlook in a Hackney Postcode breeds an inherent craving for the freedom of the fells. His route was motivated by his drive to explore and inspire. 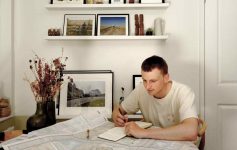 ‘I owe a lot to Brigadier Martin Hotine, without whom I would probably have frozen to death many years ago during a typically ill-fated Lake District expedition that characterised my childhood. That day, it was decided suitably ‘character building’ to set off into a snowstorm armed only with the best 2-piece waterproof ten pounds could buy, a map, a compass and a navigational knowledge that owed a lot to the Blue Peter special watched a few days prior.

For on the 18th of April 1936, Brigadier Martin Hotine assembled his cronies of map geeks and mathematicians around a concrete pillar in a field in Cold Ashby, Northampton and began a project to unify the local maps and county projections under a single national grid, datum and reference system. The pillar they duly gathered around was of Brigadier Hotine’s design, it was 4 feet high and trapezoid in profile and had a triangular brass plate set into the top designed to fit a measuring device known as a Theodolite. The ‘trig point’ as the pillar became known was rolled out across the country and quickly became a symbol for the halfway sandwich stop amongst the hill walking community. According to the Ordnance Survey, there are well over 6,500 of these points and without them, the system of parallel grid lines we rely on for navigation in the UK wouldn’t exist.

Arguably the three most famous of these trig points are found at the highest peaks in Wales, England, and Scotland.  For the Parallels challenge, I will doff my casquette to the Brigadier by attempting to reach all three by biking and hiking-a-bike throughout the solstice weekend.

There is a unique and beautiful contrast between the objective and seemingly banal world of a map and drawing a rational line upon it compared to the wealth of experiences, mishap and misadventure involved in following it. It is this juxtaposition that lies at the heart of the Parallels challenge. I can’t wait.’

Searching for Treasure: Bikepacking Through the Eyes of our Children

Onboard the Transcontinental Race