Paris to Taipei; Lightweight and Long-haul

Apidura rider Sofiane Sehili is currently riding across China, in the midst of a long-haul bikepacking trip along the fabled Silk Road. We caught up with the Tour Divide and TransAm Bike Race veteran to talk about his journey to date, and discover his unique perspective on long-distance, ultra-lightweight cycle touring. 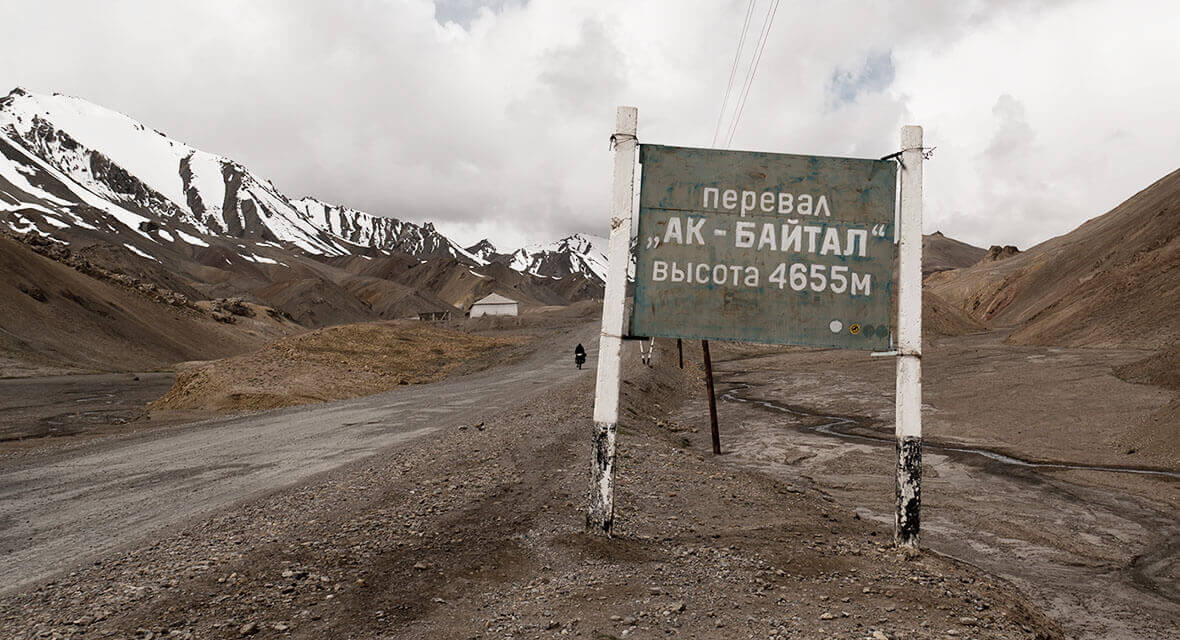 Like so many other touring cyclists, Parisian bikepacker Sofiane Sehili once dreamed of riding around the world.

After first discovering the joys of bike touring on a five-month journey around South East Asia in 2011, he developed a thirst for adventure and life on the road that would shape his life for years to come, and while cycling has indeed taken him around the world since then, it has not been in the singular journey he first imagined.

Sofiane has ridden throughout Asia, Europe, Australia, New Zealand, and the US on long-distance, meandering tours, and as a result has discovered a talent for ultra-distance racing too, finishing third in the Tour Divide in 2016 and eighth in the TransAm Bike Race this year. But as the riding locales have begun to stack up, so too have the kilometres, with his average daily distances steadily increasing from 100km per day in earlier tours, to 150km and 200km the latter ones, and upwards of 500km during the competitive racing adventures of recent years.

In somewhat of an amalgamation between his two passions – travel, and riding bicycles for extremely long distances – Sofiane’s latest adventure is perhaps his most ambitious yet. No sooner had he completed the 2017 TransAm Bike Race did he set about planning a trip that would take him across the biggest landmass on Planet Earth, from Paris to the Pacific Ocean, in a near unbroken trail of pedaling. Following the legendary Silk Road for much of the way, Sofiane’s journey follows trails that have been popular with cycle tourists for decades, from pioneering trailblazers like Full Tilt author Dervla Murphy, to the groups of riders that can now be found on roads between Istanbul, Samarkand, Xi’an, and beyond.

However, rather than the pannier-laden bikes, steady pace-setting and desire for cultural immersion that is the norm for most traveling cyclists, Sofiane’s approach is, while largely fueled by the same motivations, also completely different. With just an Apidura Saddle Pack, Frame Pack, and Top Tube Pack, his setup is incredibly minimal for such a long journey, and his daily target of 200km will strike an incredulous chord with many traditional cycle tourists. But with his combined experiences of travel and ultra-distance racing, Sofiane’s approach is remarkably unique, and in many ways also refreshing. It is a style of bike touring that will not be for everyone, but for Sofiane it is all about time in the saddle, and the experiences afforded by that time. “There is no other place I’d rather be,” he tells us.

You’ve covered a lot of ground in a very short space of time, and no doubt experienced a lot as a result, but what have been the highlights of the journey so far?

This trip has been a series of highlights, to be honest, all the way from the banks of the Danube to the Tibetan Plateau. I’ve ridden along the shores of the Black Sea, the mountains of the Caucasus, the steppes of Kazakhstan, the deserts of Uzbekistan and the snow-capped peaks of Kyrgyzstan, but without a doubt the crown jewel of the Silk Road has been the mythical Pamir Highway in Tajikistan.

On one 450km stretch, between Jelondy and Sary Tash, which are both set well above 3,000m, there were only three resupply points. What I experienced there was absolute solitude, as if I had some of the most beautiful mountains in the world all to myself. It was a level of peace and tranquility that is hard to describe.

Are the huge daily distances difficult to keep up?

Since I left Paris, I’ve been averaging 200km per day. It’s not been too difficult to keep up physically, but it has been mentally. Riding so far every day isn’t easy to do, even on smooth, flat roads, and doing it in Central Asia, where the roads are often very broken and rarely flat, requires dedication and perseverance. Riding beyond 10 o’clock at night is not uncommon as a result, nor are ten-hour rides with less than an hour’s break in between.

On top of this there is traveler’s fatigue. When you spend months on end moving every day, the whole process of packing, traveling and unpacking becomes tiring. The enthusiasm kind of withers away, so sometimes the hardest thing for me is getting going, but once I’m on the bike, there’s no other place I’d rather be. That’s one pleasure that doesn’t go away.

How has your experience changed between different countries and conditions?

Things can change quite quickly when you ride 200km a day, and every time I get to a new country I have to adapt and adjust to the specific challenges it offers. When I entered Eastern Europe there was a notable decrease in the quality of the road surface, then in Turkey I had to deal a lot of heavy traffic on big, dangerous roads. In Georgia I was worried about drunk drivers; in Kazakhstan the heat and the lack of resupply points led to dehydration; in Uzbekistan it was the sheer distances I had to cover in order to find a place to stay. Tajikistan’s main challenge was the altitude, with a lot of time spent above 4,000m, before the rain and cold of an autumnal Kyrgyzstan. Now I’m in China, where on top of the cold, the altitude and the distances between towns, I have to deal with travel restrictions and frequent police controls.

So far I’ve managed to adapt and my progress is steady. There’s just one thing I absolutely can’t stand, and that’s the pointless honking that seems to be a trait of drivers in every country I travel through.

What setup are you running?

For this trip I went with an Omnium CXC bike, which is a sturdy steel frame with disc brakes. I have 35mm tires and I use a single chain ring with a nine-speed rear derailleur, so I shouldn’t have to worry about replacing my drive train any point. As far as packs go, I use an Apidura Expedition Saddle Pack (17L) , a Backcountry Top Tube Pack (1L) and a Expedition Frame Pack (4.5L).

I’m very happy with my setup. I’ve done a lot of touring, so I know what I need and what can be left at home. I’ve used every single item I’ve packed several times, and really don’t think I could carry any less. I could certainly carry more, but there have only been a few occasions where I’ve found myself saying “Oh I wish I had this or that”.

What has travelling so light enabled you to achieve?

I climb faster and I’m more agile on rough roads, which means I can cover more ground every day, and that makes everything easier. For example, I arranged my Chinese visa in Paris, and then had three months in which to enter the country. With a traditional, heavier touring set-up it would have been hard to get there in time, and obviously the bike behaves very differently than a touring rig with front and rear panniers. That feeling, to have a lively bike between your legs, might just be the most important thing for me.

How do you think your experience has been different to riders who choose a more traditional, heavier touring setup?

Most cyclists I’ve met have initially thought that I was only out for a day or two, which kind of says it all, and we do have a wildly different approach to bike touring. They carry a lot because they need a lot. They camp, they cook, they change clothes, they make coffee; things I never do. If I don’t reach some accommodation, I just crash somewhere in my sleeping bag, and since I don’t cook, my dinner will usually consist of a couple of candy bars or a bag of chips. I sleep in my dirty clothes, wake up, dream of having a nice cup of coffee, and get back on my bike.

I think for most traveling cyclists, their trips are as much about the experiences of camping, being close to nature, people, and their cultures, as well as the cycling, whereas for me it’s first and foremost about the cycling. I like nature, but I don’t like it enough to enjoy sleeping in the woods. I like people, but it’s not in my nature to get close to them. I’d rather watch how they live from afar. I like to see the workers in the fields and the shepherds on the road, but I’m much more comfortable being a spectator from my bike than trying to play a part in their lives. As for the culture, there is no ruin, temple, mosque or museum that will match the beauty of what you see from the saddle. This is why I ride so much. It’s what I enjoy the most, it’s what I want to do, and it’s where I want to be.

So yes, our experiences vary greatly. Most people on the Silk Road travel for longer periods of time than me, and perhaps they experience more, or have a better understanding of the countries they visit, but that’s not what I am after. Of course I love that feeling of being in a foreign land, feeling lost and confused because everything is so different from what I’m used to, but ultimately what I’m after is the feeling I get at the end of hard days – days that are so ridiculously tough that when I start them, I doubt if I’m going to make it.

Then I make it, and little things like a hot shower, a cold drink, a meal, or a bed; things that we take so much for granted in our everyday lives that we don’t even pay attention to them, feel so blissful. All it takes to discover that the simplest pleasures are also the purest is one epic, long, seemingly unfeasible ride.

Seb Jarrot follows in Hannibal's footsteps and shares three gravel rides in the Haute Maurienne with us.

Ride The Japanese Odyssey This October

DETOUR – Calling all artists and creatives