Paul Spencer is an adventurer, world record holder and a fan of doing things first, so it’s no surprise that after Lachlan Morton rode his Alt Tour, Paul decided to supersize his plans to do the same and ride all three Grand Tours in preparation for cycling around the world. Read on to discover, in his own words, how this never-before-attempted feat played out and discover why Paul believes bikes are the ultimate adventure machines.

I’m always looking for something different. I’m not a fan of the big races, where you pay a lot of money to go do them. I’d rather do something a little underground, like the roots of bikepacking races, where you just pay a spot tracker fee and off you go.

I’d always thought it would be cool to ride the Tour de France and ride the stages in between. So when Lachlan did that last year, I was a little disappointed. I love doing things that nobody’s done before, proving that challenges are possible, and Lachlan bikepacking the Tour meant I’d no longer be first. But one night, chatting to friends after watching the Tour, one said “well you could just do all three tours” and I immediately thought that would be cool.

I’ve done the Tour Divide, TransAm and races in that four-to-five-thousand-kilometre zone – both my world records across Europe are roughly 4,500 miles – but I’ve never done anything in the 14,000-mile zone. It piqued my interest. Could I push that hard? Could I go that long? It just seemed like such a cool adventure. I really like pro bike racing, so I knew it would be a great experience.

I decided I’d start the whole thing the same day as the pros for the Giro in Budapest and I wanted to finish before the pros in Madrid. I wanted to do each ride, each tour in the same window as the pros. But as I looked at the numbers it became a little crazy, especially with the Giro starting in Budapest, then going to Sicily and the Vuelta starting in Utrecht before heading to Spain.

This meant I rode most of the Giro after the tour had passed through. I was so far behind that there were no fans, and all my interactions were with random people in restaurants and petrol stations. The Tour de France was fantastic, however, because I actually saw the race around ten times and the supporters and race caravan were never far away. I’d stop and chat to fans of the race and never felt lonely. In fact, there were several people I met multiple times, including a guy on a cargo bike visiting the stages.

Spain and La Vuelta were similar. When I was around the race, there were plenty of people to talk to. Unlike the Tour de France, which was very international, most of the fans at the Vuelta were Spanish. The Tour de France was great for finding English-speaking fans, but it was nice to have that social aspect across the two tours. The distances at La Vuelta were crazy though, so I had to change my mindset from socialising to grinding out the miles at points.

While Spain was home to some really tough climbs, they were generally short and the hardest climbing was at the Giro, with plenty of steep, sustained climbs. The Tour De France climbs were much steadier grades. It probably helped that I felt like I was in much better shape for the Tour de France and La Vuelta, but my Garmin says the biggest climb I did on the whole thing was in Italy.

One of the perks of following the routes of the tours was that you knew the roads would be good and that you were going the right way. But there was also a challenge around roads that were closed for the professionals to ride versus what I could ride as a solo cyclist outside of the race.

The Netherlands was really challenging. There are so many bike paths that if you’re not on a bike path, you literally get yelled at by every single car. But there’s nothing you can do. The road is the only route into the next town and there is no bike path. It was mentally tough on those days.

On the other hand, some of the transfers between stages were let down by my mapping. I ended up on dirt roads, closed roads and stuff like that, particularly in Spain. In Spain, it felt like the only options were highways or dirt roads. A lot of times between stages I really struggled to find a decent road to get me to where I needed to be.

On the second-to-last day, I rode the highway all the way into Madrid. There were no signs saying I couldn’t, so I was fairly confident I was allowed on the road, but I was still being beeped constantly by drivers. It was extremely frustrating because the more I rode it and realised there were no signs anywhere, the most confident I was that I was allowed to be there. Finally, I saw a sign for cyclists and knew I was right, but every single car driver seemed to know better and decided I wasn’t, so beeped me like crazy. That stuff is just so mentally hard. 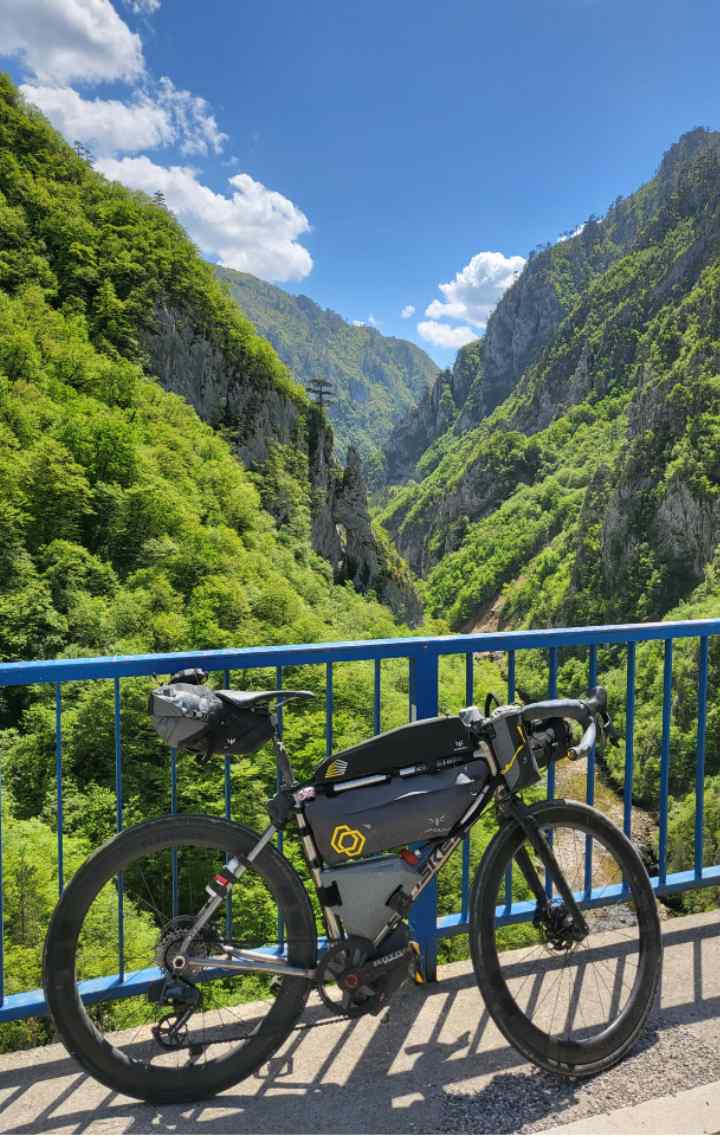 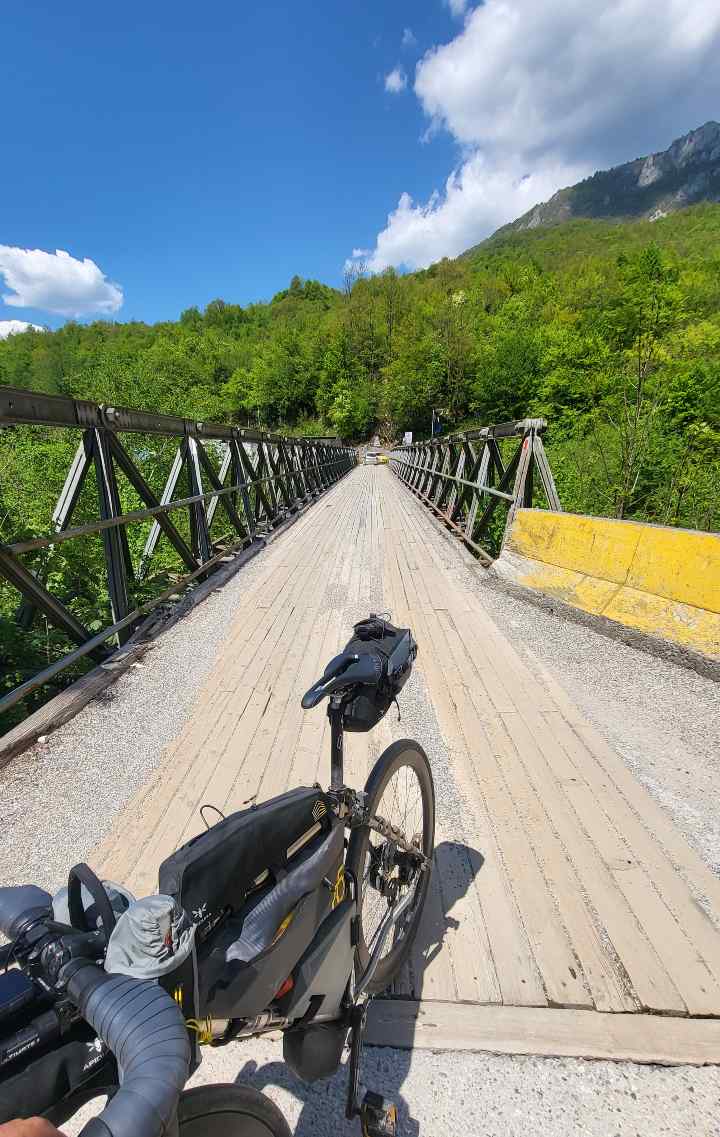 Each tour had such a different atmosphere. The Tour de France was my favourite for sure but Italy was incredible for the people and the culture, with so many friendly strangers. Spain was so relaxed. At the Tour de France, the convoy would appear, and the roads would be cleared, whereas at La Vuelta, they didn’t pull you off the road. At the Tour de France, I was losing three to four hours a day around the race, whereas in Spain you could end up almost literally at the head of the race and you’d ride through towns where the crowd would go crazy as if you were really in the race.

In Italy, I was so far behind the race because of that huge transfer at the beginning that I only saw stage one, stage three and the final stage. Italy, in general, was so friendly though and even when I was riding late into the night to make up distance to keep up with the race, they were always happy to help. Even at one o’clock in the morning, people would offer food or re-open to get you a coke or a sandwich.

Of course, it’s not all trouble-free and there were challenges along the way. I had an awful ten days toward the end of La Vuelta. Ten days of hell. I got news that my trailer that was parked at my house in America got stolen, and then my shifting stopped working in a rainstorm while I stopped to fix a puncture. Next, my credit card got cancelled when I bought a replacement bike when mine cracked. My phone carrier cancelled my phone because they decided I’d been out of the country too long. I cracked the screen. It was all stuff that in a normal world might not be world-ending, but coming one after another when I was so fatigued, it was just brutal. There were crazy headwinds in that part of Spain and I remember riding down the road thinking “well, what else are you gonna throw at me, cos it doesn’t matter. I’m going to finish this stupid ride” and yelling into the headwind.

The cracked frame was probably the biggest drama of the ride, but I wasn’t going to let that stop me. I caught a train to the end of the stage and looked around bike shops in Madrid. There were no frames available, so I ended up buying a complete bike but got the store to switch all my components onto the bike and then rented a bike from them to use to finish the day’s stage while they worked on the new bike.

It was this $600 basic road bike and I got the train back to where I’d left the route, to finish stage 20 of La Vuelta under my own power. But this bike had the scariest handlebars ever that rolled in on the drops and made descending really unstable. I can’t understand how an entry-level bike designed to get people into riding could have such an awful bar! Other than that, I loved the bike and was able to ride back to Madrid to pick up the replacement… although the brakes then failed the following day and I had to ride the next three, thankfully flat, stages with no real brakes! 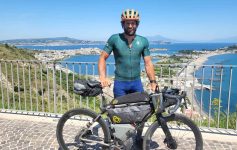 Between the tours, I was able to have a bit more freedom and make my rides more social and enjoyable. After the Giro, I met my mum and dad in Germany. We were going to ride the Elbe River, which was roughly diagonal to where I should be going and I was able to slow the pace down and take easier days. At one point, I just felt like riding to Prague, so I did. After riding to Magdeburg with my parents, I thought I’d ride to Potsdam, so almost doubled back on myself to enjoy more touristy stuff before heading to Copenhagen for the next tour.

For the next transfer, from Paris to Amsterdam, my friend Leo joined me and we went from big city to big city, before heading along the coast to the Hague. We even went round a Formula One track, which was very cool. The transfers were about having fun, taking it easy and trying to recover between each race.

My biggest takeaway though, and the one I hope comes across when I talk about the three tours, is that bike adventures are amazing and just believing in yourself and giving it a go is all it takes. Anyone can do it. It’s not about the bike and even if you only cover ten miles a day, you’re going to have an adventure.

Bikes are amazing. You can do anything on a bike, it’s the freedom to go incredible places and see incredible things, as long as you have the confidence in yourself and the will to have an adventure. As much as I do these challenges to be the first, set a record, or prove something is possible, I also do them to prove the point of just how incredible bikes are.

Guillaume and Emmanuel, organisers of the Japanese Odyssey, tell us about the spirit burning inside this unique event.