We speak to Melissa Pritchard and Nelson Trees, two experienced TCR riders, about how to plan a route and navigate on the Transcontinental Race. 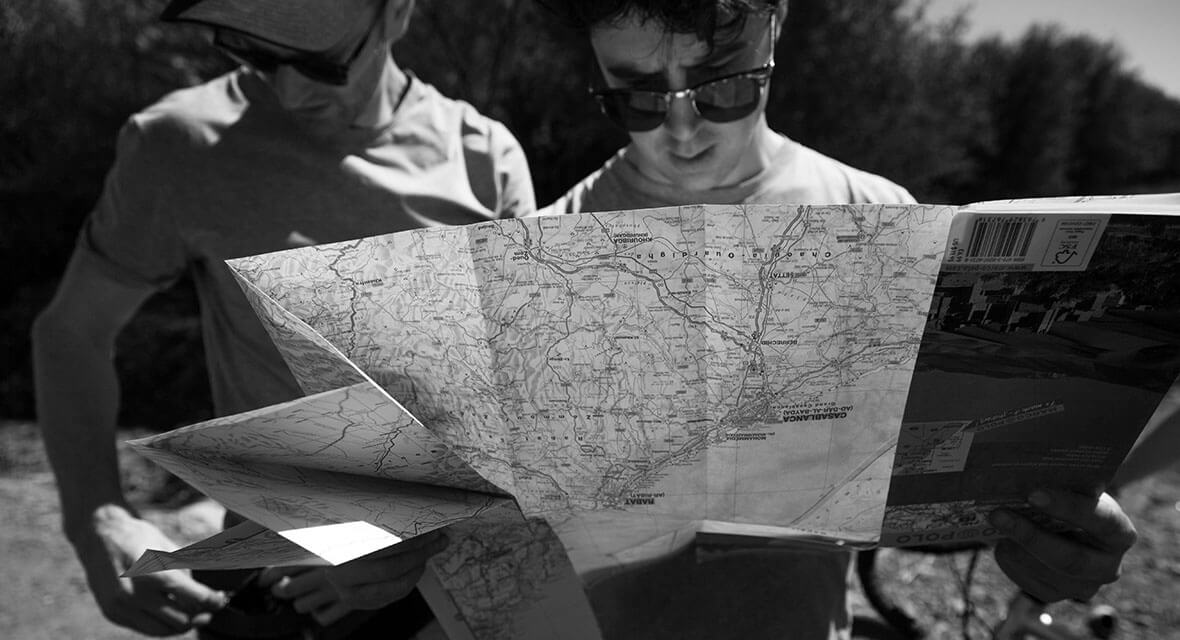 The Transcontinental Race is a 4,000km, self-supported bike race across Europe. Participants have to pass four obligatory checkpoints along the way, but the route they choose to take between each is up to them. We spoke to two Transcontinental Race veterans to discover how to plan a route for such a ride: American rider Melissa Pritchard, who was the first woman in the 2017 edition of the race, and Frenchman Nelson Trees, who has twice finished in the top ten.

Here, they explain how to plan a route for the Transcontinental Race, give tips for how to negotiate travel restrictions, and what they use to navigate on the road.

Where do you even start when planning a route for a 4,000km bike race?

Melissa Pritchard: At the start I was quite intimidated by the route planning. I’ve done lots of route planning before in my travels, but there is a difference between a regular bike tour and the Transcontinental.

I started out with a paper map, an overview of Europe, looking at where the start and finish line were, as well as the four checkpoints. My European geography is good, but not that great, so I wanted to get a good idea of where these countries were, as well as their surroundings. I also got a European Atlas to look at specific countries in more detail, and then worked checkpoint by checkpoint, dividing it into the five different sections.

Nelson Trees: The first step for me is to get an overview of the route, the obligatory checkpoints, and the general outline of where the race will go from a distance perspective. Then I split the route into sections between the checkpoints and look at those individually, and for details I’ll use a few different tools to find the best route – usually following the main roads where bikes are allowed.

How did you go about getting the balance between route directness and altitude gain?

MP: Of course you want to look for the flattest route possible, but if a detour to find a flat alternative is too long or too complicated, I’m not interested. I know myself, and I know I can handle some altitude gain, so I’m not completely deterred by more elevation. Frequently with my route planning, I was forced to answer the question of whether I wanted to take on one or two big climbs, or go for an “up and down” roller coaster option, but I will have both routes stored on my Garmin. As a rule of thumb, I look for flatter options – as long as it doesn’t mean too many more kilometres.

NT: This can be a tricky one. It basically comes down to comparing different routing options and asking yourself which you would prefer. For example, would you prefer to do an extra 300m of climbing or an extra 10km in distance?

I generally lean towards a longer, flatter route. It may actually end up taking a little longer but you also need to think of how much energy you’re using. Cruising on the flat at thirty kilometres per hour doesn’t cause anywhere near as much fatigue as moderate, rolling hills.

Are you able to add on any extra loops for sight-seeing, or is it strictly the fastest way possible?

MP: I didn’t even consider any extra loops for sightseeing. Just being on the bike in a new place is enough sight-seeing for me, especially with 4,000 kilometres of open road in Europe. I’ve never been to Slovakia, and I am curious to see the Tatras mountains; nor have I ever been to Romania. For me, a huge part of riding my bike is being present in the moment, and enjoying everything you are doing at that place and time. That’s all I need.

That said, the fastest route possible can take you on a lot of main roads and through big cities. Main routes are direct, but also have heavier traffic. Even if it is legal to ride your bike on these major freeways, it isn’t always the safest option, so I try to look for more minor alternatives that run parallel.

NT: For me, the Transcontinental is a straight-up race, so I always choose the fastest way possible. If you’re going to sign up, I think it’s important that you give it your all. You don’t necessarily need to be competitive for the win, it’s more about surpassing yourself and pushing your own limits.

I know that this is one of the things Mike loved about these races. Wherever you end up in the rankings, you’ll have lived an incredible adventure and learned a lot about yourself.

Are there any roads or carriageways that you’re not allowed to use? How do you navigate around them?

MP: You have to make sure that all of the roads you choose are legal for cyclists to ride on, including tunnels and huge intersections. You can do this on Google, Strava, or any route planning program by simply dragging your route over a specific road. The program usually won’t let you trace a riding route there, but it is important to double-check your route by using Google Street view, dropping the little guy down and looking around for ‘No cycling’ signs.

In many countries, such as Germany, Austria, Macedonia, and Serbia, the street view option isn’t allowed or isn’t very complete, so you have to rely on other sources. I’ve found myself watching Youtube videos, looking at cyclist’s blogs, and calling local hotels and tourist offices to ask about the roads. I know it sounds crazy, but you want to scout out your route as much as possible before you ride it. The fewer surprises the better!

NT: You need to follow all the local laws and regulations, so you can only take roads that are legal for bikes. In addition to this, the organizers may also ban a few more roads that are actually legal but that they consider dangerous and unsuitable for cycling.

There’s always a way around these roads thought – there’s a huge number of options when it comes to a ride across Europe.

What resources did you use to plan your route?

MP: I used a combination of resources, from reading blogs of past TCR participants, to paper maps, Google Maps, Google street view, and Youtube.

I had never used a routing program like RideWithGPS or Strava before, but in January, curious to record all my mileage, I signed up for Strava, and started using it as a route planner. For me, that was hard, because I like to zone out on the bike and just enjoy pedalling, but with a GPS you also have to pay attention to directions and where you have to turn.

Getting used to navigating with a GPS was a huge learning experience in itself: Knowing when to zoom in and out, balancing looking at your GPS and the road, ignoring a little bit of the route that you made a mistake with. It all takes time getting used to.

NT: I use RidewithGPS as the main tool for planning my route, and generally don’t look at any paper maps.

I like to use the cycling-optimised auto-routing first (in countries where it’s available), which will give you the flattest route possible. Then I’ll re-route using ‘driving’ auto-routes closely following the cycling route. This will get rid of all the annoying gravel, cycle paths and other potential diversions that – although possibly more scenic – are rarely the quickest means of getting from A to B.

Planning your route is actually only the first step, as checking for mistakes and problems is just as important. I’ll re-check the entire route using Strava heatmaps, satellite imagery and to see if Google Streetview is available along the whole route. The chances are that if a Google car has been through there, you’ll be OK on a bike too.

What navigation aids do you plan on using when out on the road?

MP: On the road I often find myself using Google Maps on my phone to check distances quickly and to get oriented, as I prefer the bigger screen and the more detailed map. I might take a quick glance at Google Maps on my phone when I stop, just to keep in mind the big picture of my route, or to search for something specific like a bike store, restaurant, or hotel.

I’ve also made a little ‘cheat sheet’ for each stage that I created. It has the names of towns I pass through, and I’ve taken note of bigger towns with services, and where the climbs are coming. It is probably not necessary, but I have it to keep me motivated and to know what is coming up. I can refer to that rather than my phone too, so it could save me time.

NT: ‘I’ll use a Garmin Edge 810 as my main navigation tool, with another Garmin as a backup, and I’ll also have the route on my phone as a second backup. I don’t plan on bringing paper maps, as I think it would be very difficult to be competitive without a pre-loaded GPS track to follow. My phone will also have a number of potentially useful extra points of interest saved, like bike shops, hotels, checkpoints, and so on.

MP: I think the majority of riders are EU citizens and won’t have problems at the borders, but I only have an EU residence card and an American passport, so for me, I have to be careful with the border crossings.

You don’t have time to deal with complicated border crossings, so I have tried to get any information I can. They usually don’t post anything special for cyclists, and it is also hard to tell sometimes if they are a ‘locals only’ or ‘foreigner’ crossing. I have also used Google Street view to see if there are any special signs, but as security sensitive zones, many border crossings aren’t on there.

NT: In the case of the Transcontinental there are no visa requirements for most passport holders but you may need to think about border crossings as not all borders are open to international traffic – some are for locals only.

Last year a lot of riders snuck across an unofficial border crossing and were able to cut out almost a hundred kilometres, but some others were turned back, so it was a risk. It’s a good idea to do a little research on every border crossing that you’ll be using.

Usually, in the EU there are no issues nowadays, but there are still a few countries that you need to be careful with.

Cartographer of the Mind

Racing bikes for very long distances can take your mind to some remote places. And Jill Homer has explored many of them.