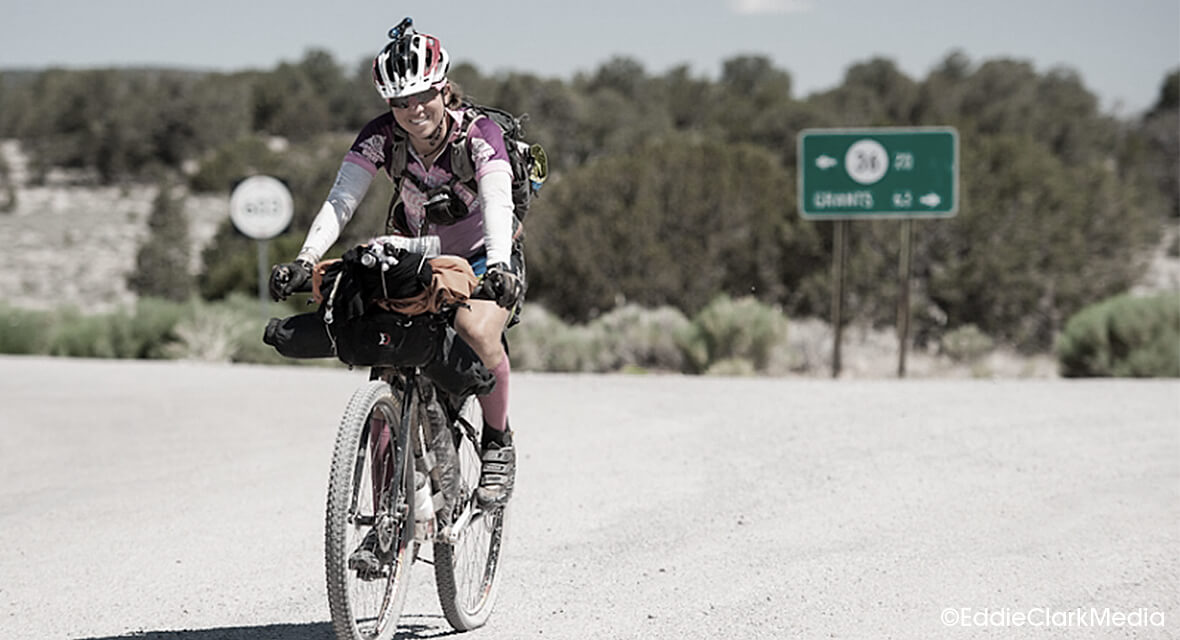 “Setting out from Banff to say ‘I’m going to ride to Antelope Wells’ was like sitting down to eat a moose.”

So says Eszter Horanyi at the beginning of her surprisingly entertaining write-up of the 2012 Tour Divide Mountain Bike Race, which she won with a time of 19 days, 3 hours and 35 minutes, setting a new women’s record, and finishing in 7th place overall. But these numbers, impressive though they are, don’t begin to express what Ezster Horanyi went through over the 2,745 miles that make up North America’s notorious Great Divide bike route, which follows the Rocky Mountains from Banff in Canada to Antelope Wells on the border with Mexico, mostly on unpaved roads and trails.

The Tour Divide tests riders in every possible way. Stumbling across the first few snowy passes, before she’d even left Canada, Horanyi felt her body starting to fall apart; an old ankle injury had to be splinted with duct tape, and a bruised tendon in her forearm (from shouldering the bike) meant that changing gear. Even holding the bars was excruciatingly painful. Further south, riders must contend with scorching desert heat, evil headwinds, and long stretches without water. But, for Horanyi – as for everyone else – the main challenges were the mental ones. Where many riders would admit that the route is difficult, and then gruffly mutter something about putting their head down and getting on with it, Horanyi is refreshingly honest about the emotional ups and downs she experienced alongside the physical ones (the Tour Divide has over 200,000 feet of elevation gain and loss), and goes into a gratifying amount of detail about how they affected her, and how she managed to cope with them.

On the threshold of New Mexico, trembling with fear of the heat, and packs of wild dogs she expects to encounter, she sits down by the side of the road and reminds herself of a passage from Cheryl Strayed’s Wild: ‘Fear, to a great extent, is born of a story we tell ourselves and so I chose to tell myself a different story from the one women are told. I decided I was safe. I was strong. I was brave. Nothing could vanquish me. Fear begets fear. Power begets power. I willed myself to beget power. And it wasn’t long before I actually wasn’t afraid.’

Elsewhere, Horanyi’s coping strategies often take on an edge of absurdity. Pedalling through bear country, she sings at the top of her voice, as much to keep her spirits up as to warn potential bears of her presence. When this fails, she hurls insults at them. Just into New Mexico, she makes a bargain with a giant thundercloud, promising to ride as fast as she can if it doesn’t rain on her. “It upheld its end of the bargain, but every time I eased off the pedals it would emit a roar of thunder, reminding me that it could soak me anytime it wanted.” The mind games worked; Eszter Horanyi rolled up to the Mexican border less than 20 days after sitting down to eat the moose in Banff. The following winter she set a new women’s record of 3 days, 16 hours and 20 minutes for the formidable Iditarod Invitational, the world’s longest – and toughest – winter race, across 350 miles of the Alaskan wilderness.