The incredible journey of Maria Leijerstam, the first person to cycle to the South Pole. 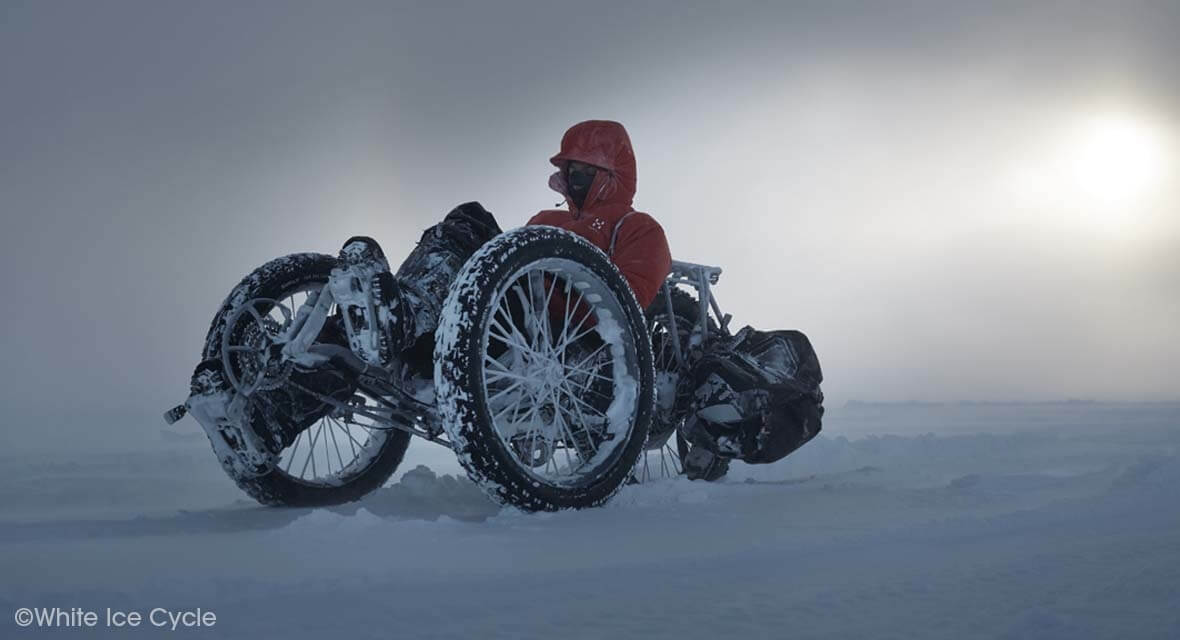 Just when we started to think that everything had been done, that every fold of the earth had been discovered, explored and traversed by every means possible, that all by the most absurd and obscure records had been broken (first thirty-something to climb Everest wearing a gorilla outfit, anyone?), on December 27, 2013, it was announced that Maria Leijerstam had become the first person to cycle to the South Pole, and suddenly we all got excited again.

And the closer you look at Leijerstam’s achievement, the more exciting it is. Her journey from the edge of the Antarctic continent to the Amundsen-Scott South Pole Station at the southernmost point of the planet was several years in the making. Coming from a background of adventure racing, Leijerstam had already completed the Marathon des Sables, enduring temperatures higher than 40°C, and the Siberian Black Ice Race across Lake Baikal, which took her as low as -40°C.

But cycling to the South Pole was no run-of-the-mill mass-participation adventure. On the contrary, it was an unprecedented solo achievement, using an entirely unique apparatus. Leijerstam collaborated with British firm Inspired Cycle Engineering to develop the PolarCycle, a one-of-a-kind recumbent trike with monstrous 4.5-inch snow tyres, specifically designed to withstand the rigours of Antarctica.

She also made substantial changes to her own body, in order to adapt it to the hostile conditions of the polar ice cap. When I met her in London, three months after her triumphant return, she told me how she had managed to alter her metabolism, training it to burn fat rather than carbohydrate by getting up at 6:00am every morning for a year, and doing a three-hour workout on an empty stomach. I gasped in admiration.

“I don’t think I could ever do that! Especially not riding in and out of traffic in central London.”

“That’s why I did most of my training in Iceland and Siberia” she replied. “There’s not much to bump into.”

This wasn’t strictly true for Antarctica. Before she reached the relatively stable interior, Leijerstam had to cross the 2900m Trans-Arctic mountain range via the Leverett Glacier, battling up gradients as steep as 25% in complete white-out, and then making a significant detour to avoid crevasses. After repeated nightmares about reaching the top of the glacier, only to watch her precious tricycle roll all the way back to the bottom, she kept herself strapped in throughout, and barely stopped until she was over the top, sacrificing her left knee forever in the process. “I don’t believe it will ever be the same again”, she admittedly mournfully on her return to the UK.

The last five days of her 10-day expedition were “an exercise in pain management”, and she arrived at the South Pole having lost 8.2% of her body weight, despite having consumed around 4,000 calories per day.

On her way back to the coast (this time as a passenger in a truck), she passed two other cyclists attempting to reach the pole, stopping to give Juan Menendez Granados a hug and wish him luck, even though his hopes of being the first to the pole were now dashed. And then she continued, looking forward to her first shower in a month, and to the hero’s welcome that awaited her on her return home.

You can find more information about Maria’s polar adventure, including the documentary about the journey at www.whiteicecycle.com.

Adrian Schmith has spent years dreaming of Yellowstone. Here he tells us about finally fulfilling his dream ride.