A profile of mountain biker, author, and National Geographic ‘Adventurer of the Year’, Shannon Galpin. 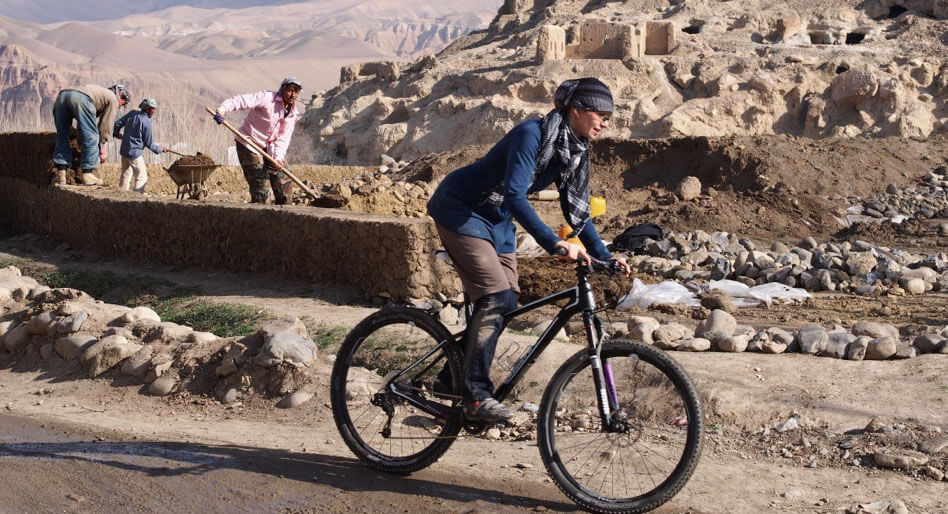 “Do you see an adventurer? An athlete? An activist, a fighter, a mother, a daughter – or do you see a victim?”

When I was discussing this project with Tori, we sat down with a beer and found ourselves rattling off long lists of all the female cyclists who’ve inspired us to become what we are – and to aspire towards what we have yet to become.

“It’s interesting,” Tori remarked, “that a lot of them are also excellent writers.”

We thought about this a bit more. Perhaps, I mused, there are after all some advantages to the lack of recognition given to female cyclists – in that the additional challenges they have to overcome to succeed in their chosen field make them multi-talented. Olympic silver medallist Emma Pooley, for instance, has a PhD in geotechnical engineering, and recently retired from cycling to focus on long-distance running – perhaps realizing that woman cannot live on a bicycle alone.

It’s well known that male pro cyclists, when they finally hang up their cleats, often have as much trouble reacclimatizing to ‘real life’ as veterans do on leaving the army. Women, on the other hand, rarely get the opportunity to leave their real life behind – and, in fact, it is often hard to tell where life ends and sport begins.

Shannon Galpin is one such woman. In 2009 she became the first person to mountain bike in Afghanistan, and in 2010 made a perilous crossing of the Panjshir Valley – despite the fact that women in Afghanistan are forbidden from cycling. Galpin is a single mother who survived a horrific rape in her teens, both of which have helped to make her the person she is today – tough, determined, and passionately dedicated to making the world a better place for all women.

Her cycling is intimately tied up with her activism – as she told National Geographic, when she was named an Adventurer Of The Year in 2013, “there is something very different about embracing a sport that you know wholeheartedly is going to make you bloody. You know you are going to crash when you mountain bike. There is no way to get better if you don’t crash.”

And this resilience is visible throughout Galpin’s life. She has always eschewed the label of ‘victim’, and founded the organisation Mountain2Mountain to help “create voice and opportunity for women and children in conflict zones”, in order that they can forge their own way to prosperity and safety, very much the way she has done herself.

Galpin’s latest project is the creation of the Afghan Women’s National Cycling Team, a project which aims to showcase the strength and energy she sees in the country’s women on an international stage, and to make them a source of pride, rather than shame, for their compatriots.

Life has not always been easy for Shannon Galpin. But, like all the best mountain bikers, she has learned from her crashes, bears her scars with pride. What truly sets her apart is her determination not only to take control of her own life, but to empower other women to take control of theirs. And what better way to do this that on a bicycle?

Mountain To Mountain: A Journey of Adventure and Activism for the Women of Afghanistan, by Shannon Galpin, is published by St. Martin’s Press.

Celebrating The Hystory Of Distance Cycling In Australia

We talk to Jesse Carlsson, organiser of the Indian Pacific Wheel Race, ahead of the inaugural edition

Bivvy Tales; Balconies, Backyards and a Break From Reality

We explore how bikepackers can get their adventure fix whilst obeying lockdown and social distancing restrictions.