Race to the Rock; Escape and Endure, with Sarah Hammond

Before the start of the Race to the Rock, we caught up with current race leader and Apidura Ambassador Sarah Hammond to learn more about her motivations for participating in such a difficult event. For her, it’s all about the escape, the challenge, and feeling alive. 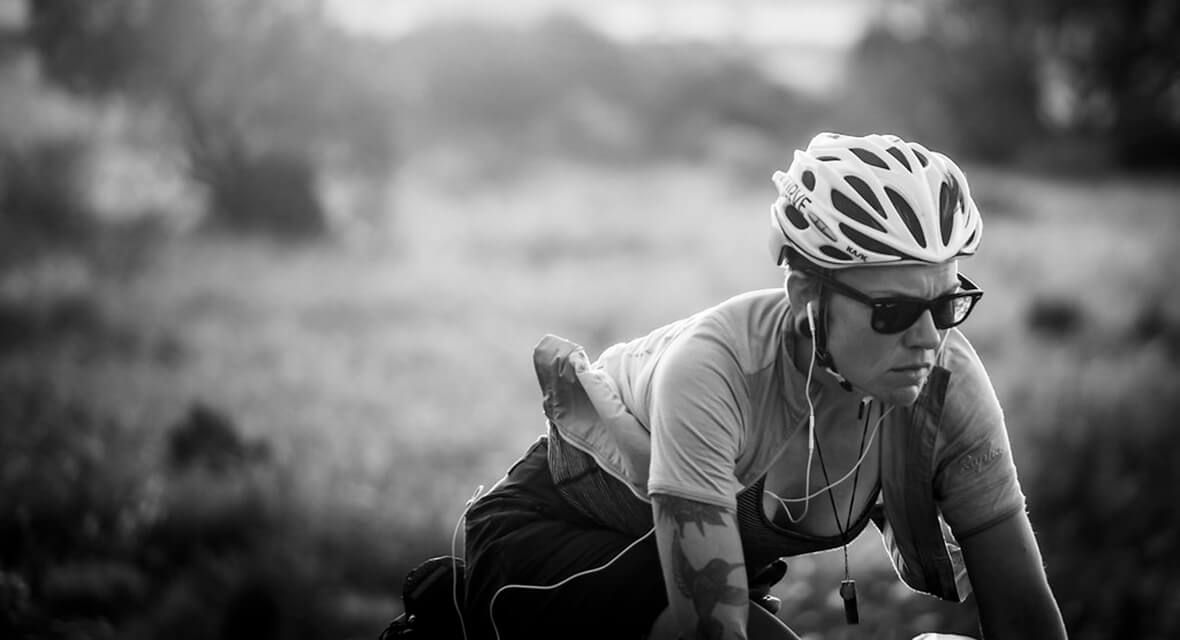 Sarah, what is it about cycling that keeps you turning the pedals?

Cycling is so much of my everyday life. I work as an instructor so it’s my income; I commute everywhere so it’s my main mode of transport, and my chosen sport is bike racing. The long-distance stuff I do is fueled mainly by a need to disconnect and just ride. I’ve also done a lot of bikepacking and touring around Australia this year, and seeing so much of my own country has been a huge highlight of 2017 to date. The scenery, landscapes, adventure, isolation, companionship, travel. It’s everything.

How long does it take to recover from an ultra race?

The recovery process changes with every race, and has many different levels. Physically, I think it takes about three months before I feel like my body starts performing well again, but this time period is of course dependent on how hard the race in question has been ridden.

It’s the mental recovery I feel can be a harder process. Along with the massive high that comes as a result of completing a race is the resulting downer; the ‘What now?’ thoughts, and general post-race blues. When you have spent so long preparing for an event, training for it, and then pushing your body hard through it, I guess it’s to be expected that things will be difficult to adjust to after it’s finished. That said, after a race I’ll always start riding again straight away – just not very fast or for very long distances.

How do you prepare for something like the Race to the Rock?

I’m excited just to have the opportunity to take off for a number of days and get away from everything. That’s the best form of motivation there is. However, as we all know it’s been a bumpy year for endurance racing, and trying to block out some of the negativity surrounding this has been a challenge, so it’s required a bit more mental preparation this time. The physical training miles haven’t been such a priority.

Of course, some caution is needed when planning the logistics of a race when you’re going so far from home urban areas, into real Australia. This year’s race is far more remote than last year’s, so riders will need to have done their homework and be prepared to ride some long distances with no resupply.

What makes this event so difficult?

It’s tougher than anything else out there. We are in the middle of nowhere, managing changing temperatures and weather conditions, wildlife, swarms of insects, rough terrain such as sand and mud, and finally the possibility of no resupply points for up to two days of riding. No phone reception out there in the bush means no outside world too, which in turn means making decisions entirely by yourself. Mentally, the Race to the Rock is harder than any of the big ultra-distance races.

Why, when you know its going to be so difficult, do you still want to participate?

For me it serves as a bit of a release, as participating in an event like this does have some appeal in the way that it makes you feel alive. It’s about getting away from the day to day box ticking; a job, chores, family, social media.

Doing something like the Race to the Rock makes you realise that we aren’t invincible, but also that we are capable of enduring hardship.

What keeps you going through the dark moments?

The highs and lows are just part of the race. The physical lows are probably easier to manage than the mental ones, and when it gets to a certain point in the race, my body simply feels better if I stay on the bike, rather than climb off. Mental lows are harder, but when I’m at the lowest of lows mentally, I just hang on to the knowledge that it will pass, eventually.

Finishing is a constant motivation. Keeping it in my thoughts from the start is something that keeps me moving at all times, and actually assists in blocking out the cries to quit that my body and head send me.

Is it only enjoyable in retrospect, or are you able to enjoy racing at the time as well?

Always. People struggle to understand that despite the day to day hurdles, it’s actually pretty amazing to be out there doing what we do. There is no better way to see the world than by bike. Time seems to slow down, and you see every part of the day, from sunrise to sunset. I always say that seeing the sky at night while you’re riding beneath the stars is a good reward for being put through the wringer in the heat and dirt of the day.

What are you hoping to get out of this year’s race?

I’m hoping to come out of the race with some new stories to tell, and with more experience of exploring of my backyard. Simple.

After being the only finisher last year, how do you expect to do in 2017?

Who knows? Every race is unique, and comes with its own set of challenges. I could win or come dead last, but all that matters is that I do the best I can and have no regrets on decisions I make.

There was an application process in place this year, which was designed to ensure that anyone who entered was genuinely willing to invest in the event and was serious about riding. As a result, we only have a small group racing, and they all want to finish. It should make for a great race.