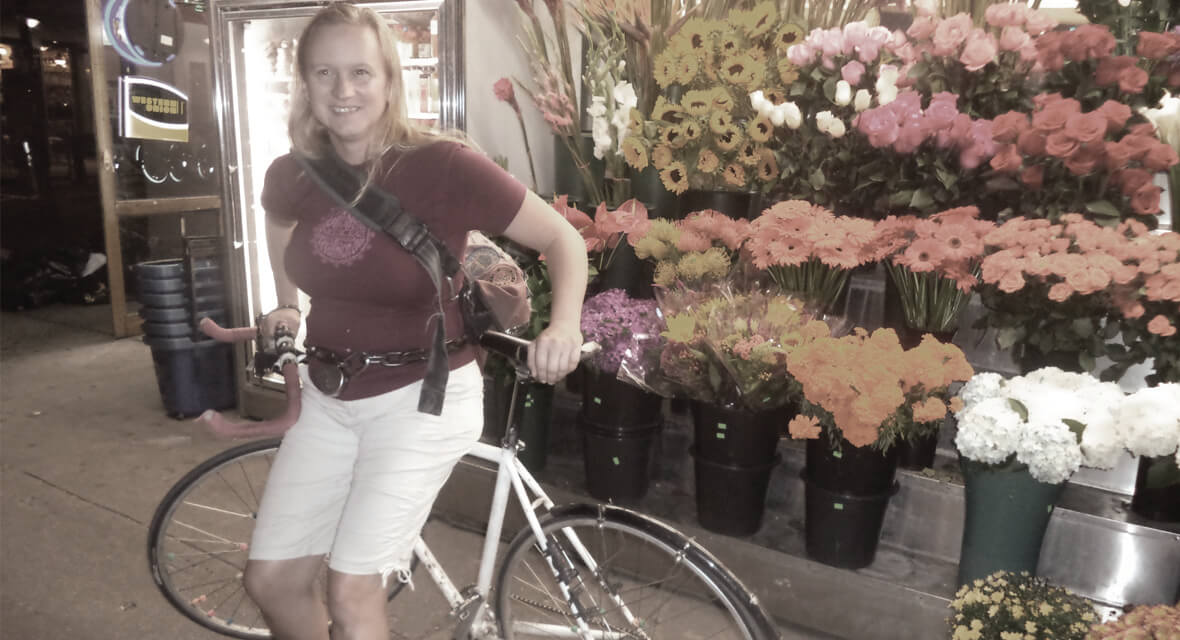 Ask most people to picture a cycle courier and they’ll imagine a skinny white guy on a brakeless fixie, probably with at least one tattoo, emptying a can of Red Stripe down his throat as he careers through a busy pedestrian crossing. I’d been a courier for several years before I realized that, while this stereotype does exist, it is by no means the dominant force in the courier world.

Women have always been part of the courier industry, as controllers, as riders, as community leaders and as chroniclers. One of the first courier companies in London was founded by two women. The London Courier Emergency Fund is the brainchild of veteran messenger Stephanie Bartczak. And perhaps the most influential courier of all is Rebecca Reilly, whose book Nerves Of Steel stands as the most comprehensive account of the industry and its people that will ever be written.

Reilly spent the 1990s travelling around the US, working in every city where there were couriers, collecting their experiences for her book and, along the way, helping to create the vibrant international messenger community that exists today. In the days before the internet, few couriers even realized that they had brothers and sisters in other cities. As Buffalo Bill, the godfather of the London courier scene puts it, Reilly “brought the international messenger community onto the streets of every city, large or small, she visited … she was its messenger.”[3]

Reilly was known for being hard and fast – she won numerous messenger championships, and wasn’t afraid to stand up to drivers who threatened and assaulted her. She was uncompromising in her insistence that women should be absolutely equal to men in the courier scene, even arguing at one point that there should not be separate prizes for men and women at the championships.

She also credits the pioneering women of the courier industry with helping to change people’s perceptions of female strength and fitness, simply through their visibility:

“We were little specks in the universe, but we were noticeable. We had sex appeal. We were fast, we were bitchy, we raised hell. We got in fights – well, not all of us. Mostly me. But you know, we didn’t back down.”

Despite her (quite reasonable) pride in all she achieved during her messenger career, Reilly has never let her ego run away with her, always recognizing that the messenger community is effectively a joint enterprise, only as strong as the people who make it. The acknowledgements in Nerves Of Steel run to hundreds of names, and she laments the fact that she couldn’t make the book three times as long, so as to include everyone’s stories.

She describes Nerves Of Steel as “a beginning”, happy to accept that, although hers is certainly the original messenger chronicle, it won’t be the last. We became friends when I sought her blessing for my own book, and in a recent email she told me: “I like to think I provided the foundation from which you could reach higher.”

She went on to tell me of the time she came second in the track skids competition in the Cycle Messenger World Championships in 2000, losing out to a girl who had worked all year to beat her:

“It made me feel great. How flattering that I was the benchmark to be surpassed. Also, how awesome that my dominance of the track events for females didn’t discourage them from trying to beat me. So instead of being alone, now I had company. For all the years I fought for fairness, it was nice to have company.”

Nerves Of Steel is nearing the end of its original print run. To get your hands on one of the remaining copies, contact Emily Chappell.

Draw Your Tour; The Adventure Artist

Tom Napper tells us about combining endurance cycling with being a travel artist to become an ‘adventure artist'.