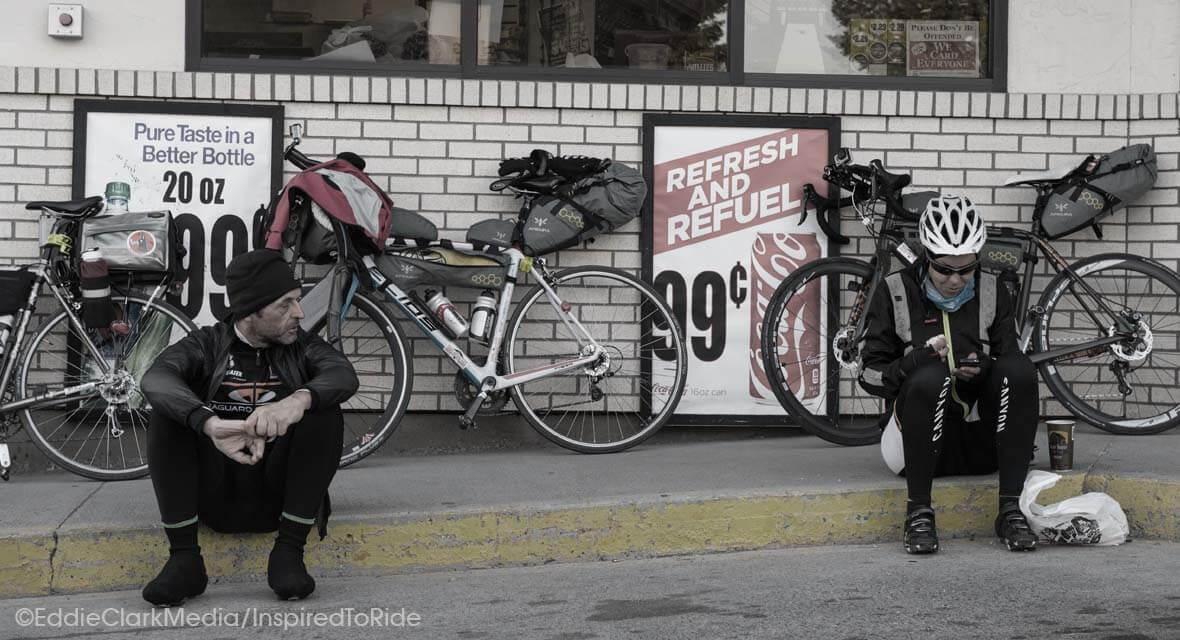 We rested under the roof of somebody’s porch while the storm rolled over and he called around for a mechanic. On the third number, he got lucky. “Awesome!” Jesse said, hanging up. “He’s driving out here with his tools and a new derailleur. Don’t worry about me, I’ll catch you up down the road.” The cold tiled porch looked so inviting, I was half tempted to bunker down with him and have a nap while he waited for the mechanic. “See you in a bit.” I told him instead, and pedalled off into the light rain.

A thick fog rolled in that night and without a GPS, I kept missing signs, getting lost and having to backtrack. It was around 3:30 am by the time by time I got to the foot of the last big climb over the Blue Ridge parkway. I had no idea whether Jesse was ahead or behind me at this point. I sat down with my head in my knees and dozed for about 10 minutes, mentally recharging for the final ascent. Then I stuffed down my last two chocolate bars, picked up the bike, clipped in and started up the mountain.

That mountain range seemed to go on and on and on. It had no real summit, only an endless series of climbs and descents. Just keep pedaling. As dawn broke, the view became clearer, and what a view! Climbing mountains without a view is truly senseless. I smiled, breathed in the fresh morning air, and said thank you. When the days were long, when the pain got too much, when I felt too tired to keep pedaling, I would take my mind outside of my physical sphere of suffering and meditate on the beauty around me, the beauty I have experienced, of where I was and what it was I was doing. “Thank you for the flat ground I sleep on. Thank you for the peace I feel. Thank you for the chance to live my dreams.” It was the mantra I had learned from a friend and often repeated. How much you suffer or how much you enjoy a race like this one is all in the mind. I think the same is true of life.

Crank, crank, crank. Jesse pedaled up. “Well there you are! Good morning!” I said.

“Stopped for a couple of hours’ sleep at the bottom of the mountain. I fell asleep on my bike again and almost crashed,” he said. “Took Mike Hall’s advice and slept in the post office. It was great.” He’d already fallen off his bike twice sleeping. I’d almost collided with an oncoming truck while dozing on my bike and veering into the opposite lane. We decided it would be a good idea to stick together till the end to keep each other awake. This sleep deprivation thing was dangerous.

We finished the last climb together. “I’m starving. Let’s get down this mountain and have us a big American breakfast.”

We got to the bottom only to find it was another 50 miles to the next town and when you’re as tired and hungry as I was, it’s enough to make you want to throw down your bike and cry like a big, filthy baby. I threw down my bike, sat on the tarmac and dozed instead while Jesse munched on something from his bag of supplies. He always seemed to have food. I estimated 80% of his bike weight was probably food reserves. When I opened my eyes, he was sprawled on the road next to me sleeping.

“C’mon man. Let’s haul ass to the next town. I need food and water. If we sit here any longer, I won’t get up again.” We were just over 200 miles from the finish line. I wanted to get there that night. I had a flight out the next day that I had to make. Every five years my family from my mum’s side met for a reunion. I’d promised to be there. Having a deadline had helped keep me from dallying too long anywhere. It had also gotten me further faster than I had imagined, all the way into the top five.

Until I moved into 7th place, nobody had paid much attention, but the moment I began passing the men, a general uproar kicked in. Women everywhere started cheering me on. Blue dot watchers were waiting by the roadside in almost every town I passed, holding signs or shouting, “Go Juliana!”

The support across the continent was incredible.

Then came the accusations. Apparently women were not supposed to be able to ride as hard and fast as men, therefore the most obvious explanation must be that I was cheating. I heard it all, from drafting to cutting corners, doping and even having camper van support secretly following me. At first the insults hit me like a blow. I was stunned and so disheartened I almost cried. Finally, I got angry. I was not there to race men, ruffle feathers or bruise egos. I was there to ride hard and push my personal limits. I was doing this for me and nobody else. What anyone else said meant nothing and would not change that. Just keep pedalling.

“Just think,” Jesse said as we downed yet another service station breakfast a couple hours later, “this will be the last shitty breakfast we eat.”

You can endure anything when there is a foreseeable end.