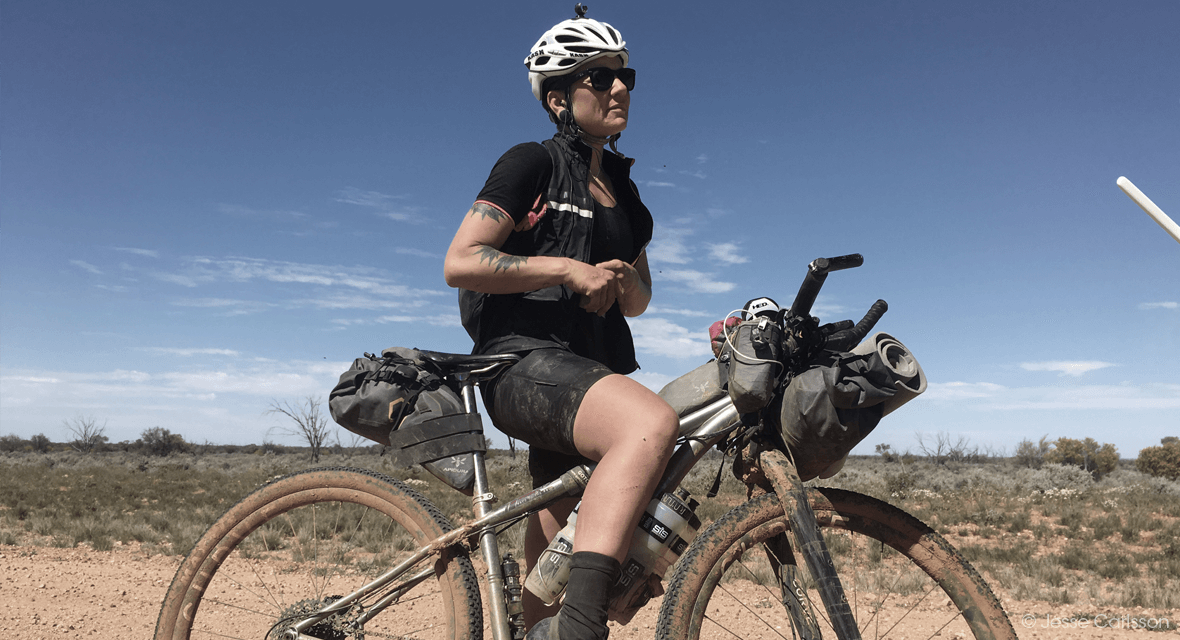 On June 3, 2016, a virtually unknown Australian rider, Sarah Hammond, readied herself on the start line of the Trans Am Bike Race. Covering 6,900km across America, from the Pacific coast to the Atlantic, the Trans Am is one of the toughest endurance races on the long distance calendar.

After leading the field for a week – the first woman ever to do so – a simple wrong turn and a bout of altitude sickness lost Sarah her spot at the front of the race. However, she finished in an incredible sixth place. Perhaps more incredible is the fact that the Trans Am was Sarah’s first ever race.

Born and raised in Melbourne, Sarah’s first foray into long distance riding began with a local cycling group named Hells 500, who she credits with sparking her interest in longer rides. Hells 500 are the creators of the popular ‘Everesting’ challenge, in which you must amass 8,848m (the height of Mount Everest) in one ride by doing repeats of a climb. “I’ve tried road racing, crit racing; it all bored me. I never knew where to place myself, but I soon realised I enjoyed giving myself a bit of a push,” says Sarah. “I was the first female to take on the ‘Everesting’ challenge, and that’s when I started to feel like I was moving towards bigger things.”

At this point, Sarah had never ridden over multiple days. Her friend and fellow Melbourne-based cyclist Jesse Carlsson (the winner of the 2015 Trans Am) first noticed her potential as a long distance rider and suggested that she try competing. Before long, her name was on the starting list for the Trans Am.

“As much as it was a crazy idea, the Trans Am was about me letting a lot of stuff go. I haven’t travelled much, and I’ve spent the majority of my life on the cautious side, often backing out of things because I’m scared of failure. So heading overseas alone and throwing myself into absolute chaos – having to figure everything out, find food, find shelter – was terrifying, but I knew most of that would disappear once I started riding.”

Disappear, it did. Her display of strength in the race, especially during the first week, has drawn a great deal of deserved attention. When she arrived home and re-engaged with social media, she soon realised that a support network had formed around her, and two and a half months after returning from the Trans Am, Sarah packed up and set off for Race to the Rock.

“I thought: ‘bugger it – you only get so many chances to do great things and have adventures.’ I’ve got this support network now, and people that are willing to look after my dog, and it was in Australia, too – so I took off.

“I had the knowledge from the Trans Am, and I had a score to settle with myself. I was happy with the first seven or eight days of that race, then a lot happened in the space of 24 hours – altitude sickness, mental wellbeing, injury – the stuff you don’t learn until you’re in the position of racing.

“With Race to the Rock, I wanted to finish stronger and not have the same setbacks. I slept a bit more, I had more of a routine, I listened to my body a bit more, and I made better decisions, and it meant I got the result I wanted. It’s my nature not to be satisfied – I could win every single race and it wouldn’t be good enough – but I need to let that go.”

Sarah’s modesty belies her seemingly natural ability as a competitive endurance cyclist. She led Race to the Rock, a 2,300km unsupported ride from Adelaide to Uluru in Australia’s centre, by 200km – and was the only person to complete the entire route.

The break-neck speed of Sarah’s emergence onto the ultra-distance cycling scene doesn’t appear to be slowing, with two of the other biggest long distance races – the Tour Divide and the Transcontinental – both on her radar for 2018. Unsurprisingly, the fact that these events are separated by three weeks doesn’t faze her. “I’ve never been to Europe, so I’d love to race the Transcontinental. I know they want more women to compete, too. I’ve been speaking to Emily Chappell [two-time entrant into the race] and she’s been really supportive.” Together with Jesse Carlsson, Sarah has also been busy planning a new race, and in March 2017, the inaugural ‘Indian Pacific Wheel Race’ will take place, bringing the southern hemisphere its own trans-continental challenge.

“It’s been amazing to see so many women starting to compete in these races over the last couple of years,” says Sarah. “There’s no definition between male and female in these races, and women are proving that we’re strong enough to compete against blokes, and win. Whether it’s because we naturally have a better pain threshold [laughs], I don’t know. I think there are a lot of women out there that could do these things, they just need motivating to take it on. Getting to the start line is half the battle, but there’s a real support network developing.”

“For me, next year’s going to be really big. There’s a lot on the agenda, and I’ve got some more support, I just need to keep riding my bike. And riding it faster.”

The Anatomy of a Scratch