Apidura Ambassadors Ed Shoote and Marion Shoote recently embarked on an ambitious ‘Six Countries in Six Days’ tour through the Balkans. As Marion writes, in a region filled with such incredible scenery and the appeal of the unknown, it was inevitable that a true bikepacking adventure was the result. 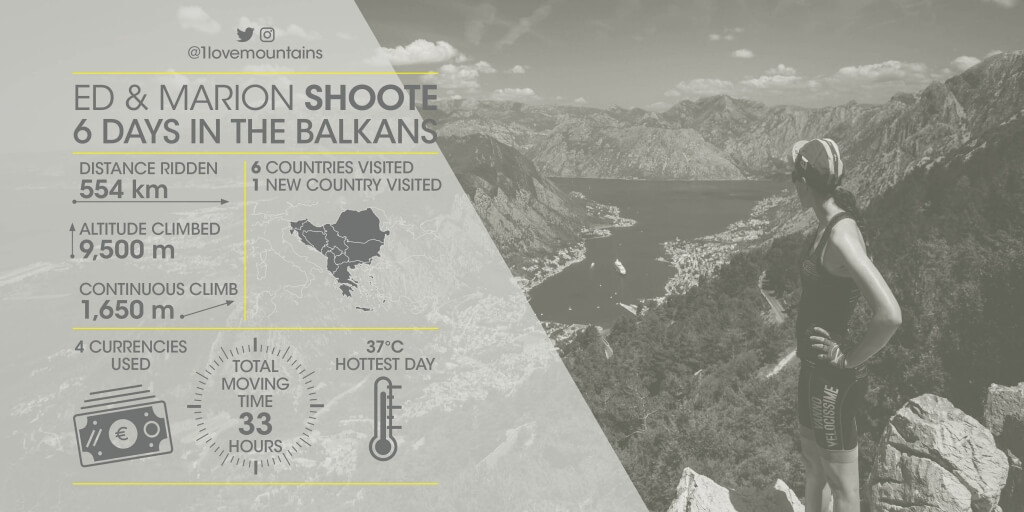 ‘Six countries in six days’. From the start, the idea felt like it had the potential to offer a true bikepacking adventure. And if we were to ride from our starting point in Croatia to make our flight home from Bulgaria a week later, riding via Montenegro, Albania, Kosovo and Macedonia, we knew that our trip would live up to its ambitious billing.

We didn’t have a firm route, just an idea of a few places on the way that looked kind of cool on Google maps, and so pedalled out of Dubrovnik airport into the hot Mediterranean sunshine with a blissfully clear agenda.

In our keenness to leave the main roads heading south, we soon dove off down a side track, which eventually faded into a quiet footpath above the sea: A good start, and a brief flirtation with Croatia to kick things off. After crossing into Montenegro and taking a ferry over the Bay of Kotor in the afternoon, we rode a quaint waterside road, past fig trees and little terracotta churches, until the fading light drew a close to day one. We camped up in one of the villages and went for an evening dip in the sea to cool off.

Day two was dedicated to a climb in Montenegro’s Lovcen National Park, which headed up to the mausoleum of Njegos, a former prince, atop a 1,550m peak. The road wound its way up above the ancient walled city of Kotor, with spectacular views of the water inlets below, and despite being long and hot, it was a magnificent climb to undertake.

After riding into the Montenegrin capital of Podgorica the previous night, day three led us into our third country of the trip: Albania. We crossed into the country through expansive vineyards and towns filled with bar-dwelling men and roadwork confusion, before starting a climb up into the mountains – towards the village of Theth, and the Valbone Valley National Park beyond.

The summer heat felt intense as we pedalled through fragrant fields of lavender towards the limestone peaks crowding the horizon, and while the climb started gently through a series of villages, it soon steepened as we approached the main pass between Boge and Theth. The views, comprised of forested slopes leading up to limestone towers on each side of the valley, were nothing short of spectacular.

After endless hairpins and a beautiful sunset on the unpaved, gravel descent, we finally rolled into Theth as darkness fell, both utterly exhausted and ravenous. There, we were thoughtfully – and fortunately – adopted by a friendly teenager, who led us to his parents’ guesthouse, showed us where we could camp in their garden, and quickly produced an amazing spread of local dishes for us to eat for dinner. Perfect.

In order to continue our bearing east, towards Kosovo, we had to navigate a 1,850m pass connecting the beautiful valley we had just cycled up with the adjacent one. But there was no road over it – not even a track. There was, however, a rocky hiking trail, so we spent a day hike-a-biking up the ascent, over a vertiginous mountain pass, and down the other side. Type two fun at its best.

The next day we crossed the border into Kosovo and made for the town of Gjakova, home to some beautiful traditional wooden houses, and then on to Prizren with its cobbled streets, old mosques and riverside hammam. The riding was lovely, along narrow gorges bathed in glorious shade, but we were unlucky in finding a sleeping option and ended up doing another 1,500m climb as the light faded. We finally got to the pass as complete darkness fell, and luckily managed to find a hotel still serving dinner at 22:30, so proceeded to eat ourselves silly on omelettes made with deliciously salty local sheep’s cheese.

Another climb the following day took us to the Macedonian border, and country number five. However, by this time we had realised that after our mountain detours we wouldn’t have enough time to make it to Sofia for our flight home without some serious night riding involved. As this was a holiday after all, we opted for some strategic bus-catching instead. Our plan was nearly thwarted when it transpired that the only option was a minibus, but the friendly driver proceeded to wedge the luggage in around our bikes somehow, and crammed us in along with the rest of the local passengers. As such, we must make our apologies to the Bulgarians who now have chain ring marks on the side of their suitcases.

We arrived in Sofia in the middle of our final night, and after a short while spent wandering the streets, eating ice-cream and looking for a hostel not totally full of stag parties, we brought our trip to an end. 525 kilometres of riding, 9,500 metres of climbing; six countries, and six days.

Conquest of Europe: A World Record

Ambassador Paul Spencer broke the World Record for cycling across Europe. We caught up with him to find out more.

It Won't Take Long to Pack

Laurence McJannet, author of 'Bikepacking', guides us through a bikepacking trip to the Shropshire Plains.