We spoke to our community of riders about the recently announced checkpoints for TCRNo9 to find out more about what riders can expect from this edition. Here, TCRNo7 winner Fiona Kolbinger, multiple TCR winner Kristof Allegaert and race veterans Bjorn Lenhard and Matt Falconer, along with our own Rory Kemper, share their thoughts on the checkpoints and likely route.

The placement of the controls seems to indicate that this year will be a straight race across Europe. This straightforward approach is something Kristof appreciates, telling us “It’s just awesome because now it’s a more or less like a straight line through Europe, instead of crisscrossing. It’s something I love a lot.”

The flip side of that directness is that it seems likely TCRNo9 will be one of the shortest editions we have seen in a while. For Fiona, a break from the longer distances we’ve seen recently is a welcome change. “The 4000km route in TCRNo7 and 4500km route in TCRNo8 were super long. By being shorter, the race has become more accessible as more people would have time to do it.”

However, there’s a good chance the checkpoints alone don’t tell the whole story. As a veteran of several Transcontinental races, Matt is sceptical. “The race is shorter on paper with 3,100km to cover according to Komoot, but I expect that some parcours or route restrictions will add a significant distance.”. It’s a sentiment our own Rory agrees with, having worked behind the scenes at Lost Dot for several years before joining Apidura. “I would expect to see some challenging parcours and restrictions, particularly in the Alps to keep riders out of the Po Valley as long as possible. The route might be under 4,000km by the time you arrive at the finish, but it seems likely several Everests will need to be ridden on the way.”

Bjorn was the only rider to express disappointment at a route that doesn’t change the TCR formula. “I hoped we’d see a start in Spain or Andorra, going first over the Pyrenees and then crossing the central massif in France. Additionally having the finish in the Asian part of Turkey would have me signing up again in a flash”. 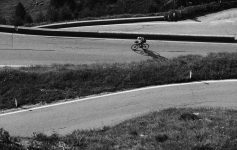 Geraardsbergen to Splügen Pass (and into Italy)

We asked Kristof to delve deeper into the first section of the race for us. “For the first section, route planning will be crucial – and there are a few options, so we should see some interesting rides. Riders could look to minimize the distance or the vertical climbing metres, but they are cycling through the alps and the shortest route will be a killer.”

There are a few options in determining the best way to approach Splügen Pass, all of which will mean spending some time in Switzerland, which for thrifty bike packers can be an ordeal in itself.

With this in mind, Kristof thinks route planning will be crucial, telling us “It is possible to take a pretty flat route to the Splügen Pass on the edge of the Alps. With some careful planning, some of the higher passes should be easily avoided.”

Rory thinks we’ll likely see restrictions set by Lost Dot that shape the race in this section. “Not knowing what restrictions will be in place or the placement of the parcours, the riders could face over 400km in the Italian Po Valley with its heavy traffic and big cities. Whilst on paper avoiding the alps might sound appealing, you will be exposed to the prevailing wind blowing from the East which picks up speed over the flat terrain and tries to push you back into the Alps. 400km of gale force headwinds, no thanks!”. 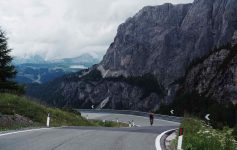 Bjorn spent some time looking at the possible route choices for this very scenic section of the route. As an area the race and Bjorn know well, he had plenty of valuable insights to share.

“The fastest route will probably head toward Sankt Moritz, followed by the Berninapass. It’s around 100km with way more than 2000m elevation. From Livigno to Slovenia, there are two main options: crossing the alps and riding through Austria or going down to Italy in the hot, flat Po valley area. Looking quickly at the options, they have roughly the same distance and elevation.”

Bjorn suggests planning for both and then deciding which to take during the race, taking the weather into consideration. However, he was quick to emphasise that there’s not much between the routes and even the fastest route will be hilly. While there are plenty of roads racers could take, the location of the control point and start of the parcour will dictate the likeliest routes. 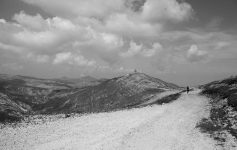 Fiona focused on analysing this, the longest section of the race at around 1,000km. “I love that the route heads through the Balkans. Bosnia and Montenegro are both beautiful countries, whilst I haven’t cycled in Albania, I have only heard good things. The most exciting part is that this will feel the most foreign to people, it’s more adventurous. A classical TCR”.

From a quick look at routing options, Fiona believes there will be a couple of pinch points in this section. “There are potentially two options, either going along the coastal route or through the mainland. A lot of riders in TCRno8 preferred the coastal option and went through Mostar. Staying more inland may provide additional challenges and climbing.”

Rory echoes this sentiment, pointing out that weather will likely have a strong role to play in the race. “The wind continues to be a theme! The Bora on the coastline of Croatia played havoc on the field in 2016, with storm-strength winds blowing riders all over the road”. But avoiding the wind means embracing challenges specific to Kosovo and Serbia. As Fiona points out, there is no Streetview in Kosovo or Bosnia, and route planning will be more challenging.

Fiona was pretty clear that she thinks this is going to be one of the best sections of the race. “The best bit is Slovenia; I love that part of the country and it was in the first edition of the TCR that I rode, with the Mangart Saddle. In my 2019 TCR, I remember that section through Austria; most riders will pass that way to control point two. The mountains in Albania will be completely different to the rest of the race and heat might be a challenge.” 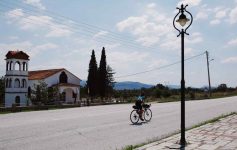 Matt suspects that control point three, in Peshkopi, will involve some challenging gravel. “It will take riders away from the coast and busy E roads allowing riders to experience some of the best of rural Albania”.

Having previously ridden to the finish at Meteora in TCRNo5 and TCRNo6, Matt who came in second at TCRNo6, knows what the riders will face. “The route down to Meteora is not straightforward. It will be quite hilly and will favour the climbers and those who have looked after their legs.” He believes that the race will likely use the same parcours from the previous edition but potentially look to reverse it to take the riders east towards the finish taking in more gravel roads and climbs on the way. He did say “Inevitably there will be a few more climbs before descending down to Thessaloniki and a well-earned beverage at the finish.“

The route between control point three and the finish will bring several challenges, including finding a way through Albania without too many border crossings, dealing with the notorious early August heat and whatever gravel parcours Lost Dot throws into the mix.

For Matt, the best parts of the TCRNo9 route are the final sections, “Albania will be a bit special. Meteora holds a special place in my heart. It’s beautiful and I have a lot of memories post-race there. The route to Thessaloniki looks very pretty. A seaside finish will be very welcoming even if it isn’t another summer heatwave. Enjoy the Gyros/Souvlaki and beer by the Aegean!”

A return to the classic formula… and the return of a TCR legend?

In the end, everyone agreed that TCRNo9 will be a classic edition of the race and that the numbers won’t tell the full story. We’re all eager to hear more about the mandatory parcours, control points and restrictions as soon as Lost Dot is ready to share them!

Finally, we don’t like to start rumours, but it should be noted that Kristof signed off our chat as follows:

“I look forward to it and I’m triggered myself, which says a lot…”

Jana and Björn embarked on a bikepacking trip to visit their families, taking the slow option to reconnect with the world

Event history, insight from riders, and key information on how to enter Paris-Brest-Paris.