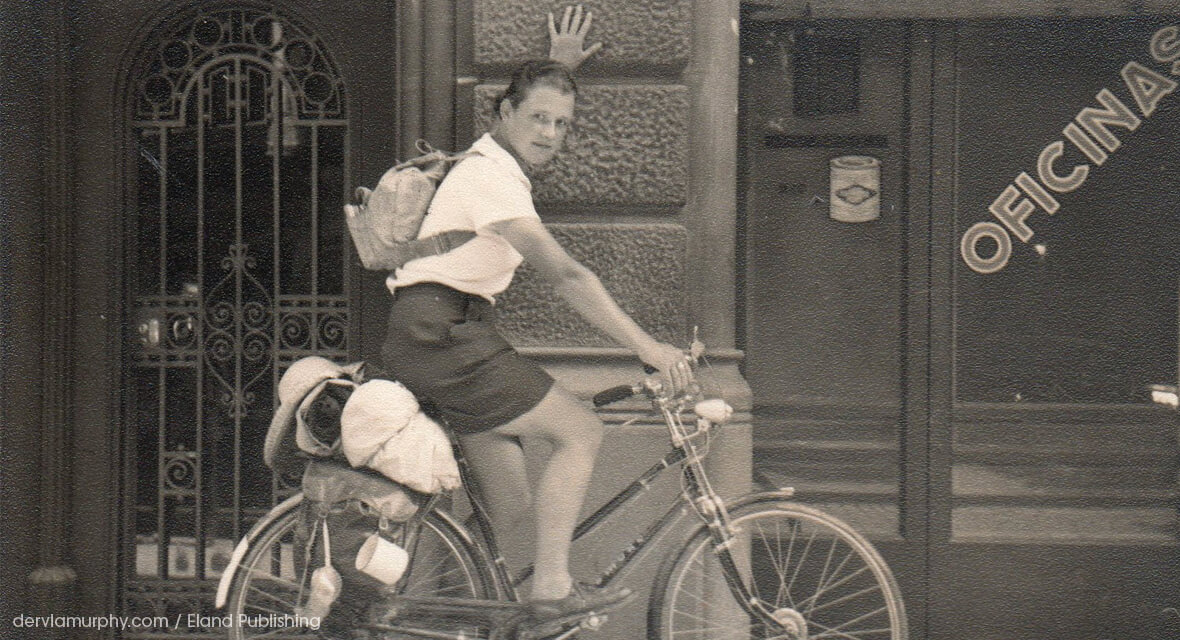 “On my tenth birthday a bicycle and an atlas coincided as presents and a few days later I decided to cycle to India.”

So begins Dervla Murphy’s magical and pioneering account of her journey from Ireland to India (or, as she sometimes puts it, Dunkirk to Delhi) alone, on a bicycle, via Iran, Afghanistan and Pakistan, and through the coldest winter Europe had seen for a century.

With all the hundreds of cyclists now making similarly alliterative journeys from Bewdley to Beijing, or Tooting to Turkmenistan, it’s worth reminding ourselves that when Murphy set off in 1963, few people had attempted such a journey, and since none of those who had had written books or blogs (the internet wouldn’t exist for another thirty years, after all), their achievements are almost entirely forgotten.

For a good forty years, Murphy’s books, along with those of Anne Mustoe and Josie Dew, dominated the world of long-distance cycling. Then, in 2001, a young man called Alastair Humphreys left his parents’ house in Yorkshire to cycle round the world, and a new genre was born – that of the intrepid young man, who grows a beard, gets diarrhoea, survives various amusing encounters with foreign policemen, and usually returns home with (or to) the woman of his dreams.

Humphreys and his tribe have inspired hundreds of people to cycle round the world – myself among them. But when I revisited Dervla Murphy’s Full Tilt on my return, I realized that it was she who had formed the true bedrock of my ambition, long before I even considered myself a cyclist.

Rereading Murphy’s experiences in the light of my own, I found that – at least in some respects – little has changed in fifty years. Just as I was, Murphy professes to being repeatedly “astonished and humbled” by the tolerance of Iranians and Pakistanis towards her own very different lifestyle and beliefs, and offers countless tales of their friendliness, hospitality and overwhelming generosity.

But another thing that hasn’t changed in half a century is the constant scaremongering. As I cycled across Asia, I became grudgingly accustomed to people’s assumptions that such an undertaking was far more perilous for a woman than for a man, and that I was either extremely foolish or exceptionally brave to attempt it. I quickly became fed up with compliments on my strength and courage, since in many cases I was being praised for achievements far below those of my male peers.

Rereading Murphy’s masterpiece showed me not only that this attitude has remained fairly constant for fifty years (and probably much longer), but also that it is completely unfounded. Dervla Murphy proved once and for all that gender was no encumbrance to long-distance cycling. As well as amorous suitors, she fought off packs of wolves and bandits with her .25 pistol, suffered heatstroke, dysentery and broken ribs, was bitten by scorpions, smoked, drank and swore like a trooper, and covered greater daily distances than I often do, riding a singlespeed bicycle and wearing woollen underpants (by which I assume she does not mean the latest advances in technical merino). It is only our prevailing belief that women are weaker, less resourceful, and more vulnerable, that continues to stand in our way.

Full Tilt: Ireland to India with a Bicycle, by Dervla Murphy, is published by Eland.

Searching for Treasure: Bikepacking Through the Eyes of our Children