The West Kernow Way: Chase the Moments That Last a Lifetime

Brewing their small-batch beer in Cornwall, the announcement of a new off-road long-distance bikepacking route not far from the brewery gate had co-founder and long-distance cyclist Aled and his wife Jo (a first-time bikepacker) itching to explore it. Having secured a sneak preview of the route they dropped everything to ride it on the inaugural launch weekend before anyone else. Aled recounts the story here.

The Stohk founders and I grew up in the South-West of England, and whilst we have since drifted all over the place, it made complete sense that Stohk would be rooted here. Before beer and cycling, we spent our formative student years exploring Devon and Cornwall searching out new surfing breaks on epic road trips. Adventure-packed days were usually followed by long nights spent around the fire, telling stories and knocking back beers – and occasionally ones I brewed myself.

But we lost touch with that in recent years as our careers and brewing took us far from home. Gareth was at the centre of the craft beer revolution and we’ve increasingly switched riding waves for riding trails. But I guess we’re still surfers at heart and have a deep affinity for the sea. Cornwall has to be one of the best places in the world for mixing up land and sea, so was the obvious place to base our brand.

We founded Stohk purely because we wanted to spend more time doing the things we loved, and in the places we loved. A single idea became the first of our Stohk ‘Rules’ … Chase the moments that last a lifetime. Whilst those moments include making great beer, we get all our inspiration from our outdoor adventures. And that’s why cycling features so heavily in our business. It’s the thing that inspires and unites us. 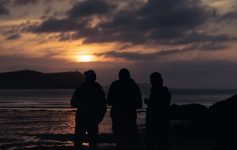 Although we managed to launch the business and the beer in Cornwall during the pandemic, the founders have been strung out across Europe, trapped by travel restrictions. Our plans for a founder’s ride from the brewery kept slipping but I was keen to come up with a route from the brewery linking up some of our favourite places and beaches. But it’s not easy plotting a long off-road route in Cornwall.

All the amazing places I wanted to link up involved super-tough riding and a voice in the back of my head kept reminding me there are no gravel bikes in Cornwall for a good reason. If you’re going off-road in Cornwall, you’re probably better off with a pony than a gravel bike. But then I started to hear rumours of the West Kernow Way – a new long-distance off-road route. Cycling UK had found an interesting way to tackle the rugged terrain…

By reclaiming old lost lanes and rights of way, they had set about trying to create a route that showcases the best of the region alongside some lesser-known gems. A few calls later and Cycling UK gave us a sneak preview of the route and invited us to ride it before anyone else. Stoked didn’t come close. And although we knew some of the beaches and landmarks, the route itself was way off the beaten track to the west of the brewery, and it was pretty much unknown territory for us. Passing through settlements that have not been inhabited for hundreds, even thousands of years the rugged mix of pony tracks, mining trails, lost lanes, byways and footpaths stacking up 4,000 metres of climbing in 236km was going to be interesting on fully loaded gravel bikes. 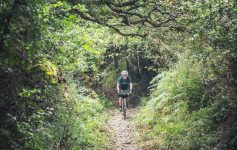 We would soon learn that the West Kernow Way, more than just a great route through interesting terrain, is a journey through time and offers a glimpse of what it must have been like to live off the land and elements in different eras. As you pass old mines and engine houses, the remains of settlements and old fishing communities you’re reminded that this is a place where people have always drawn on nature and the elements to live off the land.

Just like the Cornish tins mines that have been abandoned, so too have the famous breweries. Mentioning no names, one of the most well-known Cornish beers is now mass-produced hundreds of miles away. But small-batch local brewing thrives amongst the small craft brewers who are making unique beers inspired by their surroundings. When Stohk wanted to start brewing at a bigger scale than our home kit would allow, we reached out to the Cornish brewing community for help. In a way, it’s how business has always worked around here.

Our first night, arriving in Porthleven (an old fishing port) just after dusk, that rich cultural and industrial heritage called out to us through time. The first few stars were out, and the festoon lights were twinkling around the harbourside, lighting up the fishing boats. Having just ridden (and in places pushed) our way across the ancient Tinners Way, I could almost feel the glow of the lights soothing my aching legs. I can only imagine how great it must have looked to tired fishermen coming in from days at sea. With the Ship Inn perched on the harbour wall, I imagine them going straight to the pub for a pint of Cornish pale ale and the warmth of the open fire.

Over the course of that first day, we covered 100km over the most diverse single day of cycling I have ever experienced. Every effort paid back with incredible riding, landscapes and views. Breathtaking cliff-top gravel tracks through the Botallack tin mines, perfect gravel riding along the way to the Bronze Age sites and prehistoric settlements scattered across the uplands of West Penwith. But to experience these amazing places you first have to navigate Kernow’s untamed terrain. Constantly sloping and occasionally too steep or rugged to ride, this route is visceral and ‘out there’.

It’s no surprise to learn that the settlements along the Tinners Way were abandoned in Bronze Age times – it’s completely isolated and we joke people must have abandoned it because it was so difficult to get to the pub! 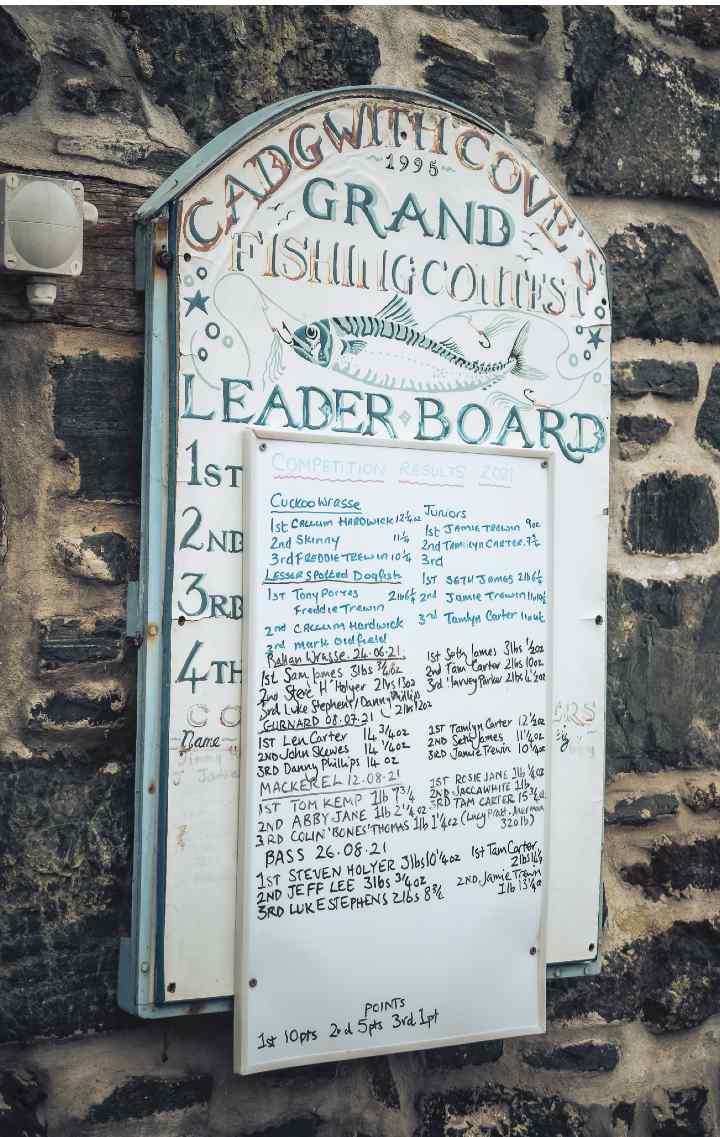 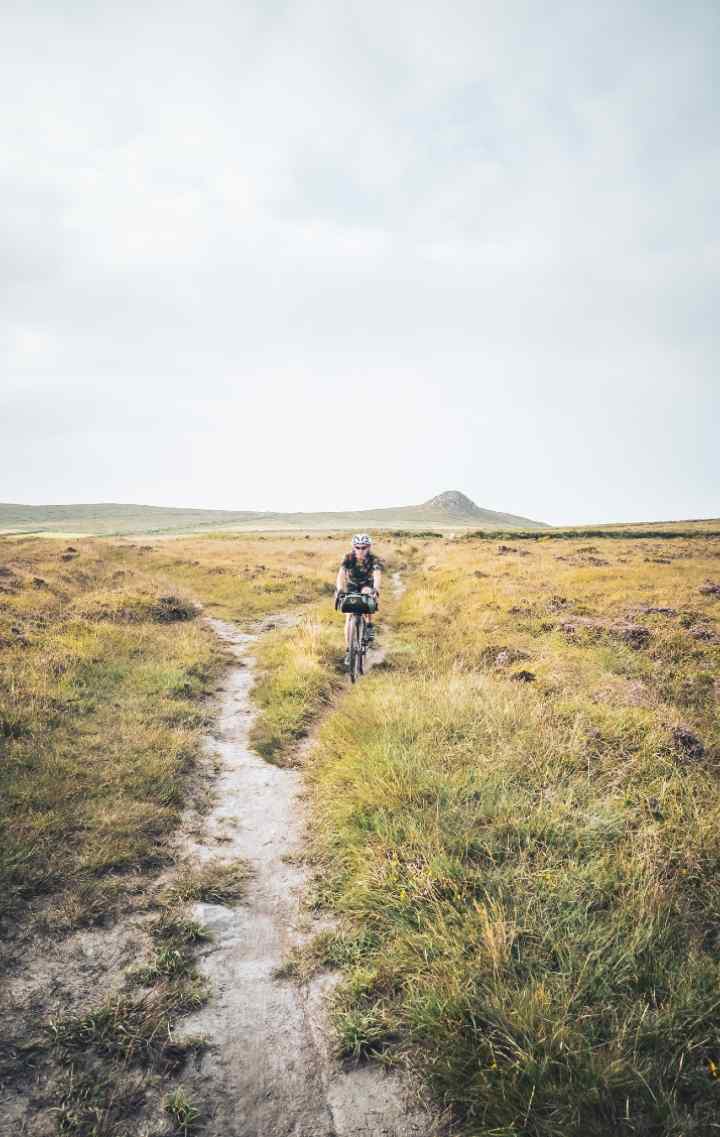 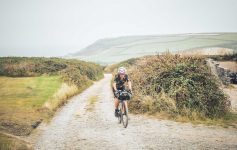 The second day seemed like it would be easier when I planned it – another 100km off-road, but with more time to explore. Another coast-to-coast ending in another beautiful fishing port, Portreath. But first, the route takes a scenic detour via the most Southern point on the UK mainland. High-up on a gravel path that rides like a magic carpet, I almost need to pinch myself. After the jutted and jagged rocks of the Tinners Way, we had found the opposite end of the gravel spectrum – pure fine grit and then a short while later a new one on me – pure white gravel. If there is a gravel path to heaven, I am pretty sure it would look like this. After pushing across the soft gravel of The Loe Bar, more punchy and rocky climbs take you slowly south. Navigation is tricky and mileage slow

But it’s another slice of amazing Kernow time travel. First up, we had to push our bikes across The Loe Bar – a gravel bar that separates the sea from a brackish lake that is steeped in legend. Then after the clifftop ride to the Lizard you reach Cadgwith – an olde world fishing cove surrounded by shipwrecks where gig racing remains the main sport just as it has been for hundreds of years.

Over the days of riding, we learned that there’s no such thing as a predictable average speed down here and planning an ETA is pure guesswork. Riding up the insanely steep old railway track out of Portreath, we found ourselves wondering what surprises the West Kernow Way still had in store. But as we coasted along pristine gravel through the old mining settlements before a tough climb up to Carn Brea (an imposing 18th-century castle built on an old Neolithic and Iron Age fortifications), we started to realise that the more you ride this place, the better it gets.

Yet we continued to be surprised by the isolation and complete absence of any other people. This must be how it always was. It’s hard not to forge a deep connection with the land and elements as you cycle through them. The West Kernow Way takes you on an amazing journey where you’re never far from the sea. Riding through the landscape you are constantly reminded of how the elements and people have shaped the land over the generations.

Time happens slowly down here, and time spent offers rewards way beyond the miles pedalled.  To ride a bike through this landscape is to challenge your body, but it stimulates your senses to leave you invigorated and wanting to go deeper. It’s no surprise this place is so rich in stories, myths and legends. Cycling through this place does not feel like you are passing through a moment in time, it feels like you are passing through all of time. In the space of just 3 days, I can sense something has been etched in my memory that will last a lifetime.

If you are going to ride the West Kernow Way, the charity suggests you download the latest GPX file from their website as it will be the most up to date file and should give the best experience of the wonders of Cornwall: https://www.cyclinguk.org/route/west-kernow-way-gpx-and-map

Bivvy Tales; Balconies, Backyards and a Break From Reality

We explore how bikepackers can get their adventure fix whilst obeying lockdown and social distancing restrictions.