4,233 miles across USA on the Trans America Trail 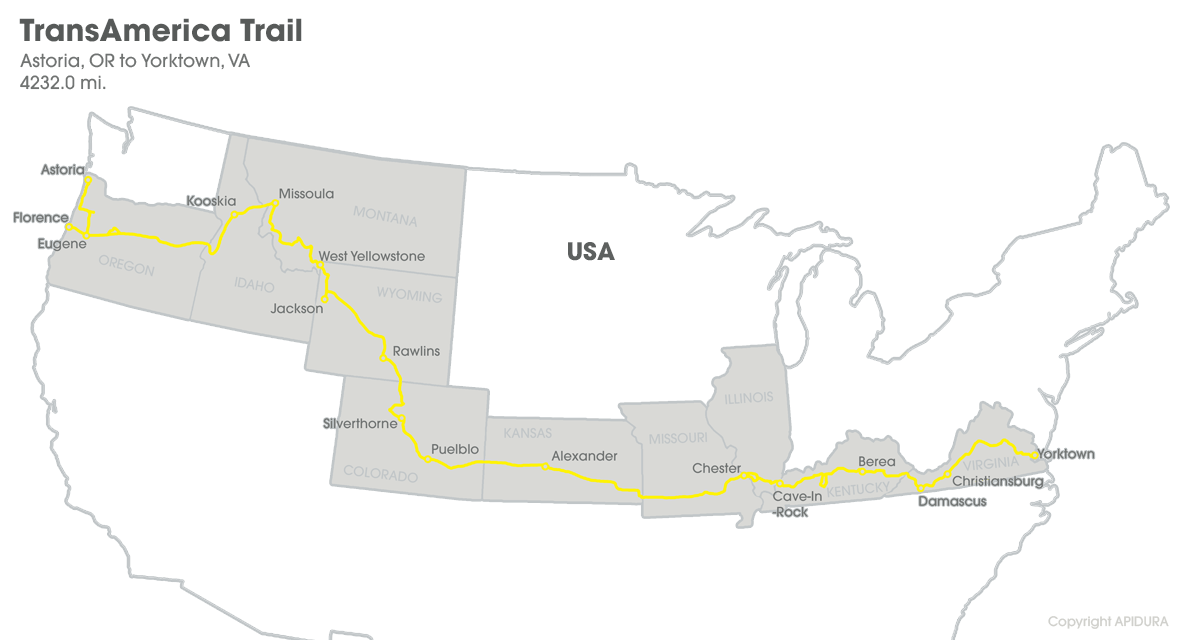 On June 7, 2014 at 5:00am PST, the inaugural Trans Am Bike Race commenced, spanning 4,233 miles from the Pacific coast of Astoria, Oregon to the Atlantic coast of Yorktown, Virginia.

The Race follows the Adventure Cycling Association’s TransAmerica Trail, rolling through 10 states as riders traverse the country in this self-supported, single-stage time trial. In keeping with the tradition of bikepacking ultra-events, this is an honour race. That means no prize money, no course marshalls; just a wholesome challenge to get from one end of the country to the other on two wheels and without outside support. There are no designated rest periods or set distances that a racer must travel each day. The clock runs non-stop until the wheels reach the Atlantic Coast; whatever time of day that might be! The race is tracked via spot satellite trackers on Track Leaders and, as with many of the leading bikepacking ultra-events, you can keep up with the action each year at dotwatcher.cc.

The inaugural race was won by Mike Hall in 17 days, 16 hours and 17 minutes. Mike’s record stood until 2017, when Evan Deutsch completed the route nearly 6 hours faster. In 2018, Peter Andersen then further reduced the record to 16 days, 20 hours and 41 minutes. The full results of the Trans Am Bike Race can be viewed here.

More about the Route (from www.transambikerace.com):

The Transamerica Trail was ridden by thousands of cyclists in the summer of 1976. Called “Bikecentennial”, these riders made there way from the Pacific ocean of Western Oregon to the Atlantic ocean of Yorktown, VA. This route is now the most widely used touring route in the United States. Known for it’s hospitality in towns along the route, the route sees thousands of cyclists each year as it is mostly navigable year round. Some might ask, why race a touring route? A simple answer is, because it’s there. A more complex answer is this. The “organizer” of this race has planned for years to do a solo run of this route in a similar manner to most bikepacking ultra-endurance racing and wants to bring it to a larger audience. In keeping with the open format of most of these races, anyone is free to race. Ultra-racers, randonneurs, tour riders, gravel grinders, speed-tourists, and anyone who has a passion for taking on the open road in a speedy manner. No entry fees, no prize money. You win by taking what you can from it. The route is estimated to be at 4,233 miles covering 10 states. A good racing time could be any where from 15 days to 40 days depending on the racer’s goals and experience. This route has considerably more re-supply points than your average bikepacking race. That said there are still a few hundred mile gaps of no services, food will have to be packed and water will have to be treated in certain parts of the country.

We're sponsoring Checkpoint 4 at the 2017 Transcontinental Race, and we couldn't be more excited about it

A closer look at your Parallels rides over the summer solstice weekend.

For such a small change in wording, the difference between self-supported and self-sufficient has far-reaching implications.