It was about the time the saddle sores started bleeding, the dull ache in my knees got sharper, the sun burned some crazy degrees too many and headwinds slammed into me at 60 km/h, that I began to think participating in the Transcontinental Race had been a really bad idea.

When Mike Hall originally told me about the toughest unsupported race across Europe, the first ever of its kind, I was pretty sure I could take it on. I mean, I had cycled the world, what was a continent? For someone so cynical, or “realistic”, by nature, I am pathetically optimistic when it comes to challenges. And it would be a challenge, that much was certain, or I wouldn’t have signed up. I intended to push myself and discover new potential, or limitations. I had only been cycling for two years and this was to be my first real race. I had no idea what I was up against, only that, being the only woman amongst thirty men, it involved contending with great quantities of testosterone.

After the world cycle, I could not find the will power to get back on a bike for a good four months. With the race date fast approaching, I could no longer put off training. It was the incentive I needed to get back in the saddle. I was surprised by how quickly my muscles picked up where they’d left off. I had lost my cycling form, but after just two months, I was pedalling 200 km days again without much trouble. Knowing I’d have to cross the Alps, I did some hill training as well. There’s nothing like a series of mountains to slow you down in a race.

In hindsight, I did not train nearly close to enough and it was too soon to do something this big and tough. I was a lot better off physically than mentally. By day five, my brain was fighting me. I hit the Alps and those long, windswept mountain ranges began wearing down my resolve. I woke up at 3:30am and headed up the Fluela Pass, a 15 km climb in the wind, rain and darkness. By the time I came down, my head was pounding and I felt cold and feverish. I swallowed an aspirin and carried on. The rain did not let up until I crossed into Italy, when the sun broke through and I was prematurely thanking the weather gods there would be sunny skies for the climb up the Stelvio. I stopped 4 km up the pass for a good espresso and a couple cornetti with Nutella. Feeling revived and ready to take on the mountain, I clipped in and carried on up. Passing other cyclists lugging much heavier gear, I was glad I had packed minimal weight—a spare shirt, socks, a pair of boxers, bed roll and the rain jacket I was wearing.

About 10 km up, the sky clouded over and it began to rain. At 15 km, the wind turned ferocious. The higher I climbed, the worse the elements grew; wetter, colder, windier. Wind so strong, it nearly knocked me over, the cold and wet soaked into muscle and bone. At times like this, no amount of mental distraction can take your mind off the very real and present misery.

Twenty four kilometers that felt like forty four later, I finally reached the top, soaked and shivering, but gratified the worst was over. Four of the other cyclists came in after and joined me stuffing down large quantities of pasta and pizza. The wind and rain went on lashing down as we sat in the warm restaurant hoping both would calm enough for the descent. When neither appeared to have any intention of letting up, there was only one thing to do: jam an entire newspaper down the front of my shirt and gloves, knock back a double shot of whisky, and head back into the tempest. 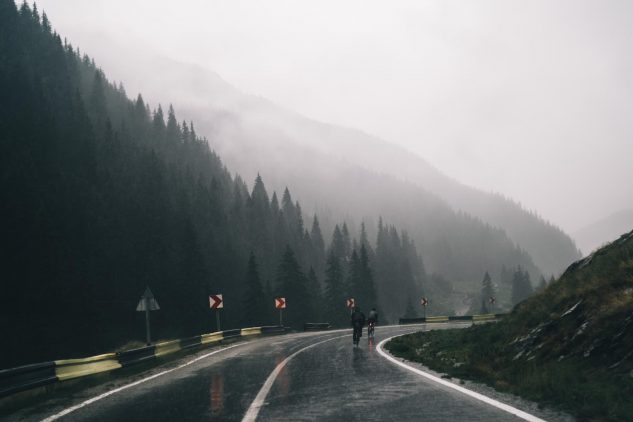 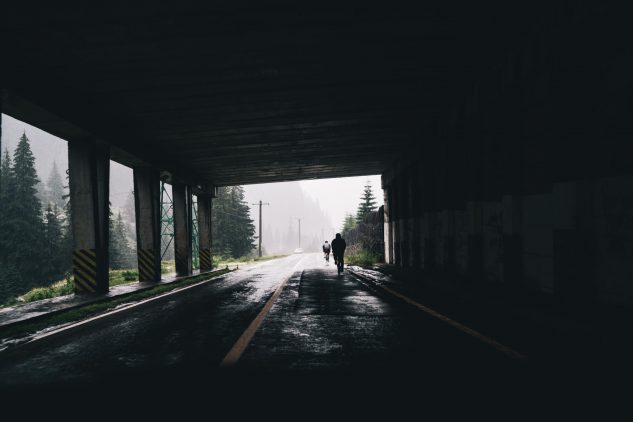 The descent was harrowing. One of many times that having a good imagination does not serve. Images went through my head of what could happen should my brakes fail or my wheels slip or a powerful gust push me off and over the mountain. I went down slowly in fits and starts. It took an hour to reach the bottom, by which time my hands were so numb I couldn’t tell whether they were still pressing the brakes or not.

Then the road became flat, the rain stopped and I had a marvellous tailwind. The worst was over and my optimism came out, all shiny and bright, with the sun. The tailwind carried on pushing me across Italy and I had the best day yet. 330 kilometers smashed, 100 of which were a long detour. Caught up in the pleasure of the long scenic cycle path along the river, I failed to turn left towards Treviso and went straight down to Verona, losing time and adding kilometers.

The night before leaving, my sister, Kristina, had said to me, “remember Farlap”. Farlap was a film we used to watch as kids about a racehorse who would start in the back, conserving his energy until the final laps, when he would suddenly push forward, galloping past the other horses and ending in front. It was time to gallop. My body had completely acclimatized to the long hours on the bike, my sores had healed, the pain in my knees lessened as my muscles grew stronger.

The race was on.

I started pedalling between 320-350 km/day, making good time through Slovenia and Croatia, and then crossing into Serbia. I thought my bum had pretty well toughened by this point, the saddle sores having long turned to callouses. That was until I became acquainted with Serbian roads. Apart from the motorway, there was no good, direct road across the country and navigating through the labyrinth of side roads and villages killed time, speed and the will to cycle.

About this point, I hit a wall mentally. Sleep and food-deprived, pedalling under 40 degree heat up and down the endless potholed roads, I started to wonder what the hell I was doing anymore. I was not enjoying any of it. What was the point?

Although the Serbian towns and cities were decidedly third world, they all had free WiFi. This was likely because nobody had smartphones or iPads, so connections were left open. I was able to check the race status often on the internet. To my surprise, I had moved from around 15th position to 10th and was more or less in line with two other cyclists. One of them, Nick, was just ahead of me on the same route. If I was suffering, I imagined the others must be too.

I decided the best way to get past the wall was to put my head down and pedal through it. Once I got into Bulgaria everything got better. I started racing Nick just ahead of me, and managed to pass him on the road. If you lose your incentive, find a new one. Keep ahead of the guy behind. With this plan in mind, I pedalled 400 km, stopping only to grab something fast from service stations en-route. By the time I stopped to eat something just 170 km from Istanbul, I was so knackered I fell asleep in the restaurant. When I woke again a couple of hours later, Nick had long passed me by. He deserved to have this one, arriving a few hours ahead of me in 8th place. I was coming in 9th. Out of the 31 cyclists at the starting line, nine had already dropped out for one reason or another. I could well understand why. Apart from health or physical issues, the fatigue starts to wear you down mentally. Time and reality begin to warp in strange ways.

Istanbul was so close. The last push and final hurdles included an adrenaline-rousing dog attack, a puncture changed on the motorway with giant trucks speeding past, and finally, a powerful headwind. The final 60km stretch of motorway into the city felt endless, like the Istanbul skyline was a moving backdrop going round and round infinitely.

There are few adequate adjectives to describe how it feels rolling up to a finish line after a race like this one. Some of the guys who had come in before me were waiting, including Kristof Allegaert, winner of the race, two-wheel terminator and a really funny guy off-bike. Richard Dunnett, in second and another incredible cyclist, handed me a cold beer. There’s nothing like drinking a beer or ten that you’ve earned. But then there’s nothing like sleeping in a comfy bed after a couple of weeks of sleep deprivation and napping behind bushes. There’s nothing like sitting in a chair under the shade doing nothing for hours after you’ve pedalled 16-18 hours every day under the baking sun. There’s nothing like a long hot shower after the accumulated dust and grime of the road. There’s nothing like eating in a good restaurant after filling your belly with cold packaged sandwiches from service stations for a couple of weeks. There’s nothing better than all the ordinary everyday things we take for granted. Adventure and limit-pushing aside, a race like this one is sure to reawaken one’s appreciation for the little, ordinary things in life that is so easy to lose.

Off-road, self-supported - and in the wilds of Kyrgyzstan. The SRMR is a new bikepacking race with a difference.

How the top 3 finishers at this year's Three Peaks Bike Race played to their strengths for a podium position.