Check In at Checkpoint 4

The experience of riding a 4,000km race across a continent, captured on a mountain in Bosnia.

‘Bjelašnica’. Even in name alone, it has a presence. It speaks of a place that’s surely rich in character, steeped in history, and brimming with emotion. A place to be feared as much as it is revered, and as hard to find as it is easy to lose. A place, some might say, that would be a perfect fit for the fourth Checkpoint Control of The Transcontinental Race, and during TCRNo6, that’s exactly what it was.

High above the Bosnian capital of Sarajevo, in the mountains just south of the city, looms the 2,067m peak of Bjelašnica. Home to both the alpine skiing events of the 1984 Winter Olympics, and to extensive fighting during the Siege of Sarajevo in the early 90’s, the barren, exposed peak has witnessed some of life’s ecstatic sporting highs, and deeply harrowing lows, in its turbulent recent history. Like the mountain itself, those riders of TCRNo6 who made it to its mercilessly steep, unpaved slopes, 3,000km into the 4,000km race, had ridden a truly diverse emotional rollercoaster to get there. 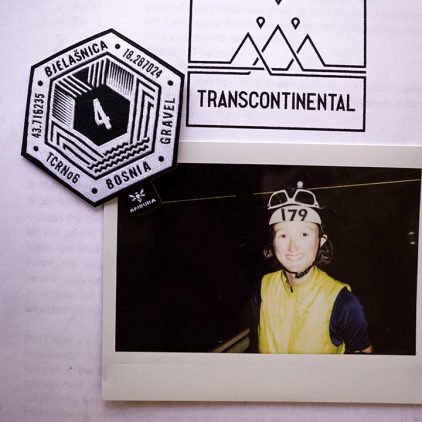 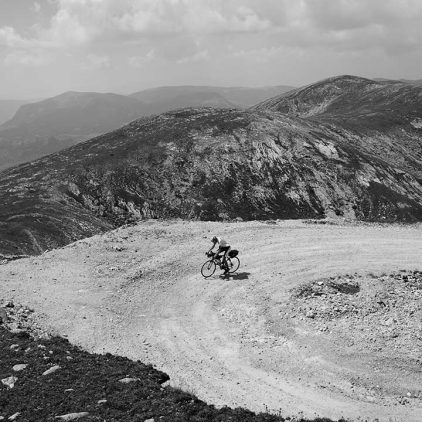 As they un-clipped pedals, eased out of saddles, and touched down at Hotel Han, the Apidura-sponsored Checkpoint Control at the foot of the mountain, we wanted to delve into those myriad experiences, and find out what racing the TCR had been like for each rider.

“Welcome to Checkpoint 4,” read the notice hanging above the heads of the checkpoint volunteers manning the control. “It’s a long way from Belgium, and you’ve still got about 800km to go. But we just want to know: How the devil are you?” 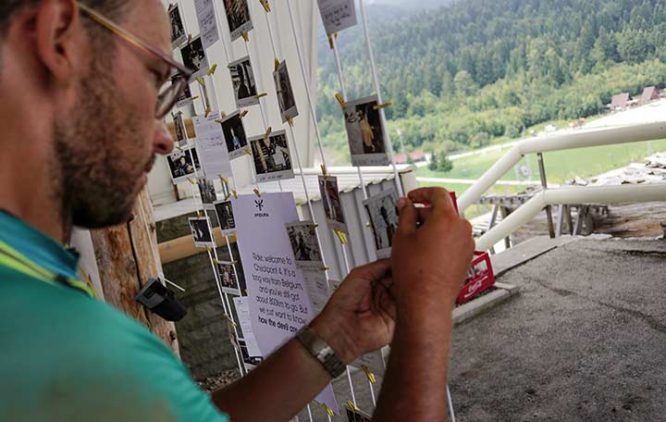 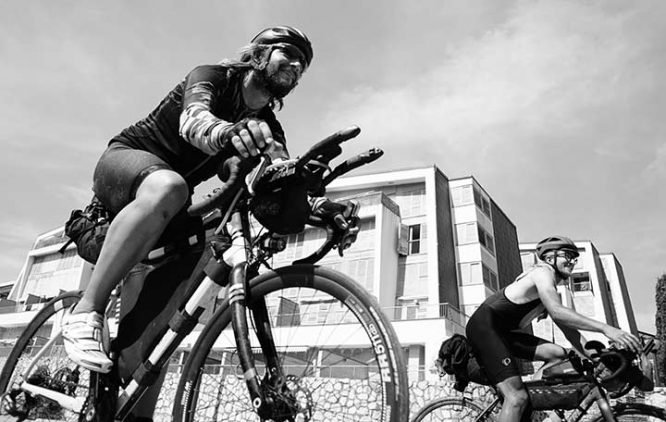 Day and night, come rain or shine, in flutters and in droves, the riders began to arrive. Armed with a selection of postcards, each with their own written prompts, probing for the crux of the TCR experience, and a Polaroid camera with which to partner visual rider portraits with those of their thoughts and feelings, we set about asking the question: How are you? 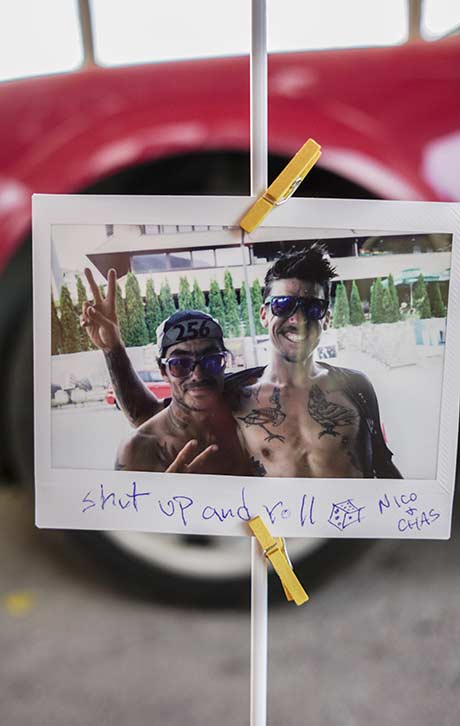 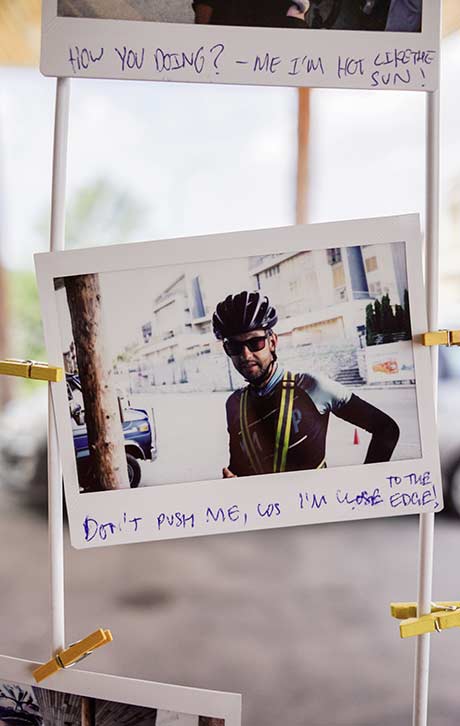 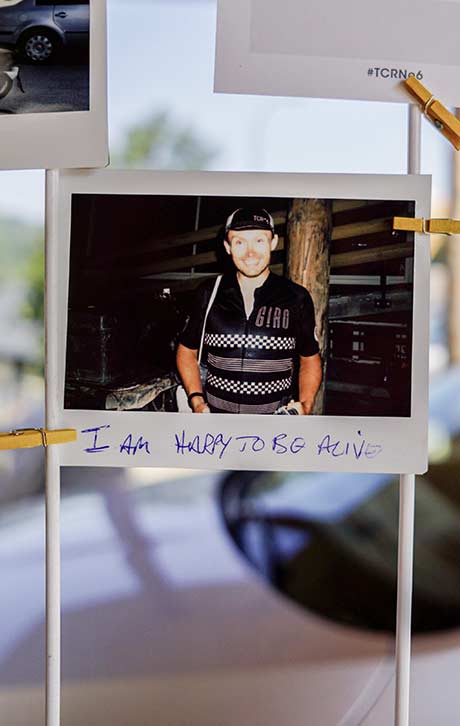 Some were absolutely buzzing, high on life and smiling incessantly as they got their brevet card stamped and chatted with other volunteers and riders. They told stories of incredible views and moments of euphoria with lucidity, before riding off again into the adventure – either to tackle the obligatory 10km gravel climb to Bjelašnica peak, or on towards to the finish. Others were not quite so jubilant, and wearily held forth on issues relating to mechanicals, injuries and routing errors, as they fell from their bikes and sank despondently into the few surrounding chairs. 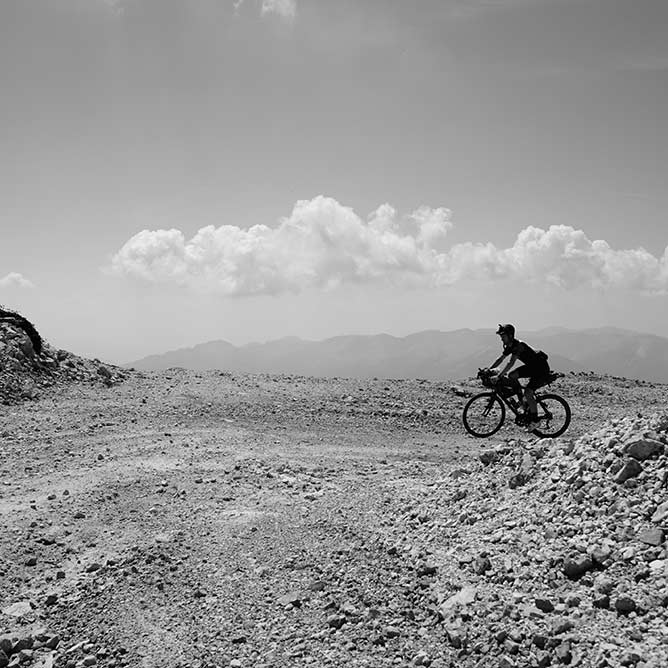 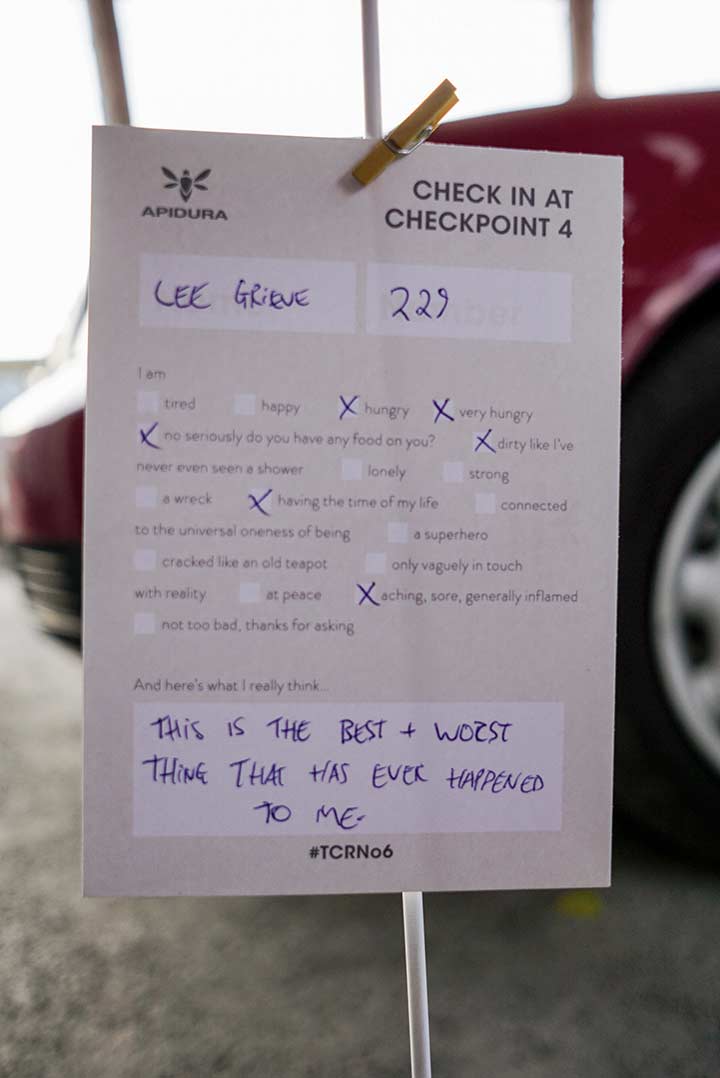 We knew that we were only seeing a snapshot of each rider’s race-long experience; a few minutes at least, and a few hours at most, of a 4,000km journey. Those riding the wave of positivity could have been wallowing in despair just a few hours before their arrival at the Checkpoint, and we’d have been none the wiser. Equally, those who we’d seen toss their bikes in frustration, and whose voices we’d heard tremble with emotion, would likely see their fortunes turn just a few kilometres later. “This is the best and worst thing that has ever happened to me,” scribbled cap number 229, Lee Grieve, on his postcard (pictured above), epitomising the duality of the rider experience in one simple sentence. “Cycling is freedom,” was written on another, unsigned, card. Indeed, for many riders it is only through cycling that they’re able to enjoy the freedom to experience such polar emotions, let alone comprehend their ability to coexist.

Gradually, the stream of riders turned into a trickle, and before long, CP4 was officially closed, leaving just a few hardy souls out on the road, who would stoically pass by Bjelašnica without a brevet card stamp, but with no less of an experience in their wake. It had only been a brief check in at CP4, but with the thoughts, feelings, faces and characters that we were able to document, then hang together in an ad-hoc collage of memories from Bjelašnica, we think we captured something special. Something Unmeasurable.

The Art of Perseverance; a Pedalma Race Recap

Ibai Fradejas explores how priorities can shift during the course of a ride.

Introducing the Race Around Rwanda

We find out why Rwanda is the perfect destination for an ultra-distance self-supported bikepacking race.