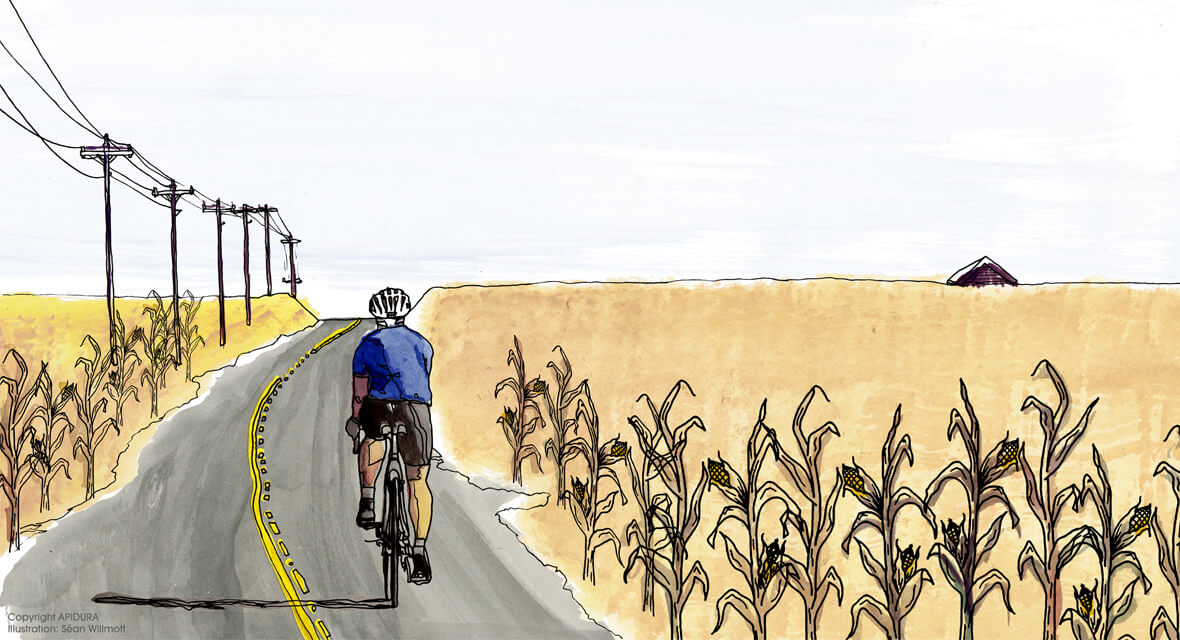 I can still feel the bruised, shredded skin on my thigh from yesterday’s fall. My toes are black and blistered with frostbite, my face raw from windburn, and my body is near collapse. But in that moment, standing up on a podium with the crowd clapping and cheering, all of it – the difficulties, sickness, struggle, exhaustion, cold, hunger, pain and tears – seemed like a dream that never really happened.

I had made it around the world, with only eight months of training on a bicycle. Without a sponsor or money. Without a technical and medical support team. Averaging 200 km a day without rest. I was not an athlete and not a cyclist. In fact, there was nothing to qualify me for such a huge undertaking; nothing but willpower and the determination to finish no matter what.

When I first decided to cycle the world, I was met with one of two inevitable reactions: blank silence or incredulous laughter. Both expressed complete disbelief. The more scoffers I encountered, the more determined I became. Researching all previous world cycles, I discovered pretty quickly there had never been a female record for circumnavigation by bicycle. This fact alone was curious. Why? Was the world really so dangerous for a lone woman? Everyone I spoke to seemed to think so. I cannot count the times I heard the words ‘It’s too dangerous!’ This probably acted as a major catalyst for my decision. Whenever I am warned off doing something, a little voice in my head starts counting down, “in five…four…three…two…”

Weeks before departure day, I decided to change bikes from the hybrid I’d been training with, to a lightweight carbon road bike. I wanted maximum mileage in the shortest possible time. I wanted a record. I wanted to fly. Everything had to be light and aerodynamic. I threw out the bike rack and bigger saddlebags, and ordered a small light pack that attached directly under the seat, shaped like the abdomen of an insect. I planned to carry only the most basic essentials, with a total target weight of no more than 20 kilos. Pegasus, as I christened my new white stallion, arrived and was assembled just a couple weeks before D-day; a couple weeks in which to learn how to ride a road bike. The position felt awkward and unstable in the beginning. Pegasus and I wobbled down the roads and took a few spills. In the unforgiving chaos of Napolitan traffic, I was like a baby deer just finding its legs in a stampeding herd of buffalo.

With very little money and a vague route plan, I pedaled out of Piazza Plebescito on July 23rd 2012, promising to be home for the holidays. It was only once I was on my bike, headed out onto the open road, that I started to think, “What the hell have I gotten myself into?”

My first real difficulties came after crossing the Alps. As I was not used to my new road bike, I misused the gears and damaged the derailleur, which had to be replaced in France. After that, the shifter stopped working and I pedaled the first couple weeks through America in either the highest or lowest gear, before I could find a mechanic who was familiar with the SRAM RED system and could fix it.

Then there were the headwinds. From the first day, everyone kept telling me I was “going the wrong way”. Strong winds, rain and countless punctures became a theme throughout the US crossing.

My real impressions of America, however, came about a week in, with corn fields on the right, wheat on the left, and a road cutting through the middle. Two little boys with dirty overalls and hay-colored hair, playing on a green tractor, waved and shouted, ‘Hey there, bicycle lady!’ Further along, I passed a horse-drawn wagon filled with Amish women in dark dresses and bonnets, heading into town to sell their organic produce. People riding lawnmowers raised a hand as I pedaled by. A couple of Harley Davidsons roared past. A man up a ladder was painting his wood-slate house white, the radio blasting ‘Let It Be’. A red, white and blue flag hung from every porch. The wind was fresh, the sun was high and this was America. I cycled across the continent in 26 days, and loved every minute.

A Race of Two Halves