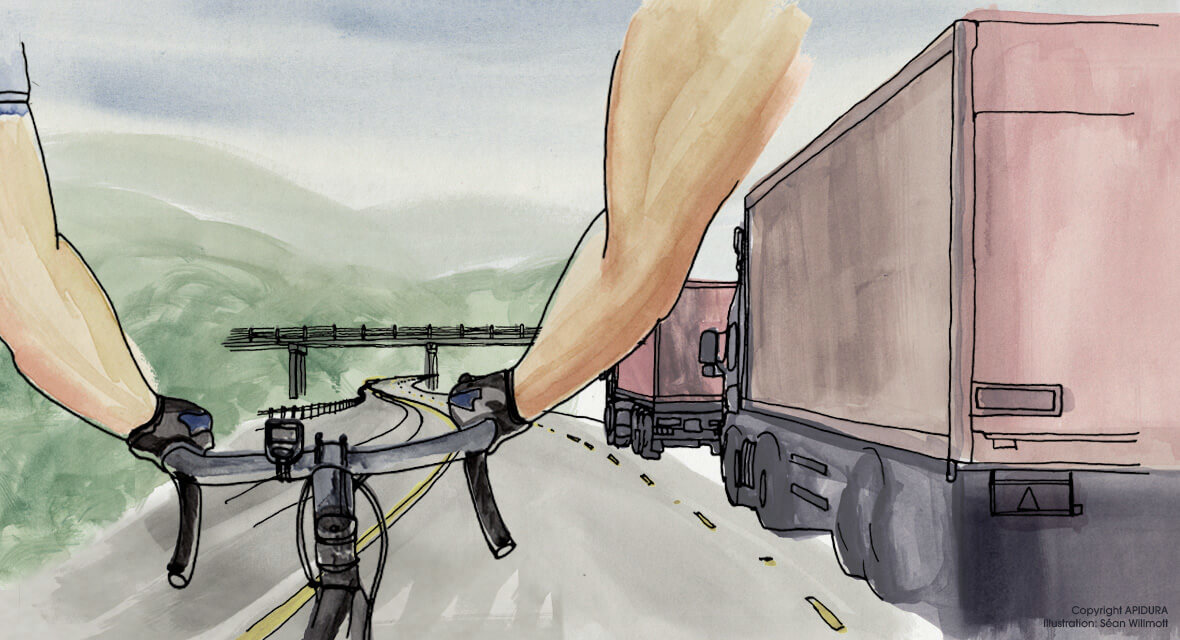 The cost of food and water alone nearly broke the bank in Australia, so I was relieved to reach Asia where I could stuff down 8 dishes of food for less than 2 euros. I arrived into Singapore airport at night, rebuilt Pegasus and hit the highway. By the time the sun had risen over the horizon, I had pedaled the length of Singapore and crossed the border into Malaysia, where everything turned very third world and very Muslim.

I was uncertain whether cyclist clothes would be acceptable there, and the moment I walked into a service station, I got my answer. A plump girl behind the counter, completely covered from head to toe, pointed one pudgy finger at me, eyes bulging from her round face and mouth open in an ‘O’ of apparent horror and surprise. Uncertain whether this disconcerting display of disapproval was directed at me, my bicycle, or both, I slunk out of the shop and wheeled Pegasus, bags and all, into the toilets around back where I dug out a pair of calf-length trousers and slipped them on over my cycle shorts.  Wearing a double pair of trousers was almost unbearable in that heat, and my legs quickly developed a bad case of heat rash.

I took to cycling on motorways, which was illegal, but the alternative meant the local roads full of potholes, without any shoulder and giant trucks skimming past. I was frequently stopped and escorted off the motorway by police patrols. As soon as they were gone, I would sneak back on again. In this way I managed to pedal Malaysia in three days and crossed over the Thai border near Hat Yai.

While in Thailand, I stopped for the night at an almost deserted beach camp and woke up in the night to find the family in the bungalow next to mine being robbed by three men. What was 911 in Thailand? It didn’t matter, as even if I did know the number to call the police, I would be unable to. There was no phone connection out there, no town nearby and I did not know the name of the campsite or the road it was on. I turned on my GPS tracker, but it was unable to pick up a signal, so I could not press the emergency button. If something were to happen to me out there, no one would ever know. I felt like such an idiot.

As a woman traveling alone, I have always been careful to stick to populated areas as much as possible, especially in third world countries. This was the first time I had consciously chosen an abandoned spot to spend the night. I leaned back on the pillow, alert to the slightest sound outside, and had a long think. After running through all potential outcomes and exhausting all possibilities, I arrived at the last and worst case scenario. Death. Well, worst scenario for most people, anyway. There had been times throughout the cycle, when I thought that I wouldn’t care if I died just then, in a place I wanted to be, doing what I wanted to do most. Just being. Happy. In those moments, I didn’t care if I never finished the cycle. But the further I got, the more I found myself wanting to reach that finish line. Wanting many more perfect days. Wanting to see more, do more, and experience more.

My eyes grew heavy. I had to get up early and sleep was precious. If something was going to happen between now and then, it would happen. Sitting up and waiting for it wouldn’t change anything, so I pulled the sheet over my shoulders, closed my eyes, and didn’t open them again until morning.

Ahead of TCRNo6, we caught up with Berk Okyay, who will be the honourable Rider 171 at this year's Transcontinental Race.

A Race of Two Halves